While 2016 is wrapping up (it’s December?!?!), we still have some terrific new books coming out this month.  I’ve been holding off on doing a “best of 2016” list because I have a few more books that might just make the list! In the meantime, take a look and consider adding some of these to your shopping list! 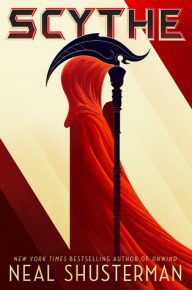 Story: “In a world where disease has been eliminated, the only way to die is to be randomly killed (“gleaned”) by professional reapers (“scythes”). Citra and Rowan are teenagers who have been selected to be scythe’s apprentices, and—despite wanting nothing to do with the vocation—they must learn the art of killing and come to understand the necessity of what they do.

Only one of them will be chosen as a scythe’s apprentice. And when it becomes clear that the winning apprentice’s first task will be to glean the loser, Citra and Rowan are pitted against one another in a fight for their lives.”

Quick take: There are ton of interesting ideas in this book, but it’s basically the story of a girl and a boy figuring out what to do with their life. It takes a little bit to warm up and frame up this advanced society, but then the story and intrigue start to kick in. Fascinating ideas and one of the more original books of the year. 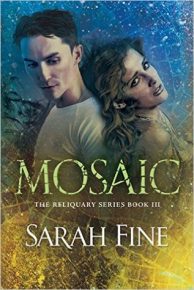 Story: “Mattie Carver never thought she’d give up her small-town life to become one half of the best magic-smuggling duo in the business. Until recently, she didn’t even know such a business existed. But as an unusually strong reliquary—able to carry vast quantities of magic in her body, undetected—she’s been pulled into an underworld of organized crime and addictive enchantments. And although she’s determined to keep things professional, her partner, Asa Ward, is a temptation she finds increasingly hard to resist.

Even as their relationship reaches a tipping point, Mattie is wary; Asa already told her he hates cages—literal or otherwise. But when an international black-market magic exchange goes awry, Asa falls into the hands of his enemies. Now, with the man who refuses to be controlled under the command of a ruthless captor, Mattie must decide how far she’s willing to go to rescue him—assuming there’s anything left to save.”

Quick take: Mosaic is another dark and heart-wrenching chapter in this thrilling roller coaster. We finally get more backstory on Asa, but the ending definitely leaves the door open for more books in the sexy and mysterious series. More books, please! 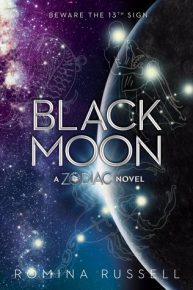 Pitch: Like the other books in this wildly imaginative science fiction series, Black Moon contains all the trademark exotic travel to fantastic worlds and tons of political intrigue

Story: “Book 3 in the breathtaking sci-fi space saga inspired by astrology that will stun fans of the Illuminae Files and Starbound series.

One final secret stands between Rho and the enemy. But will the devastating truth be enough to destroy her first?

Rho, the courageous visionary from House Cancer, lost nearly everything when she exposed and fought against the Marad, a mysterious terrorist group bent on destroying balance in the Zodiac Galaxy. Now, the Marad has disappeared without a trace, and an uneasy peace has been declared.

But Rho is suspicious. She believes the Master is still out there in some other form. And looming over all are the eerie visions of her mother, who died many years ago, but is now appearing to Rho in the stars.

When news of a stylish new political party supported by her best friend, Nishi, sends Rho on another journey across the galaxy, she uses it as an opportunity to hunt the hidden master and seek out information about her mother. And what she uncovers sheds light on the truth–but casts darkness upon the entire Zodiac world.”

Quick take: The Zodiac series has some of the best world-building: it’s layered, thoughtful, original and wildly imaginative. Black Moon resolves a lot of questions, but the ending raises a LOT of new ones that need answering in the series finale.
This series is such a great escape read with tons of smart action in a textured universe. Definitely start with Zodiac and disappear into this crazy world for a few days. 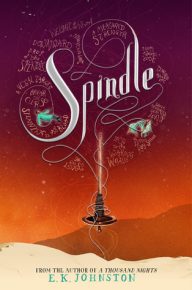 Pitch: A twist on Sleeping Beauty with demons in a loose follow-up to A Thousand Nights

Story: “It has been generations since the Storyteller Queen drove the demon out of her husband and saved her country from fire and blood. Her family has prospered beyond the borders of their village, and two new kingdoms have sprouted on either side of the mountains where the demons are kept prisoner by bright iron, and by the creatures the Storyteller Queen made to keep them contained.

But the prison is crumbling. Through years of careful manipulation, a demon has regained her power. She has made one kingdom strong and brought the other to its knees, waiting for the perfect moment to strike. When a princess is born, the demon is ready with the final blow: a curse that will cost the princess her very soul, or force her to destroy her own people to save her life.

The threads of magic are tightly spun, binding princess and exiled spinners into a desperate plot to break the curse before the demon can become a queen of men. But the web of power is dangerously tangled–and they may not see the true pattern until it is unspooled.”

Quick take: You don’t need to read A Thousand Nights to enjoy this book, though there are some spoilers if you go back and read it. The stories are separate enough that they are pretty independent of each other and quite a bit different. The writing is as lovely as ever and there are magical moments with some of the creatures and between the characters. There are times where the book stalls a bit, but the beautiful and heart-breaking ending make up for it.

Fate of Flames by Sarah Raughley 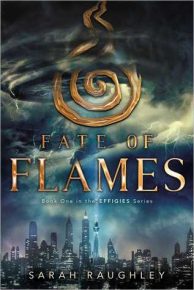 Pitch: Fantasy that reads like a Freeform TV show

Story: “Years ago, everything changed. Phantoms, massive beasts of nightmare, began terrorizing the world. At the same time four girls, the Effigies, appeared, each with the unique power to control a classical element. Since then, they have protected the world from the Phantoms. At the death of one Effigy, another is chosen, pulled from her normal life into the never-ending battle.

When Maia unexpectedly becomes the next Fire Effigy, she resists her new calling. A quiet girl with few friends and almost no family, she was much happier to admire the Effigies from afar. Never did she imagine having to master her ability to control fire, to protect innocent citizens from the Phantoms, or to try bringing together the other three Effigies.

But with the arrival of the mysterious Saul—a man who seems to be able to control the Phantoms using the same cosmic power previously only granted to four girls at a time—Maia and the other Effigies must learn to work together in a world where their celebrity is more important than their heroism.

But the secrets Saul has, and the power he possesses, might be more than even they can handle…”

Quick take: This borrows story elements from Buffy the Vampire Slayer (long line of girls chosen to receive superpowers to protect the world) and Pacific Rim (huge monsters drop in at any given time) but with a completely different vibe. This reminds me of an action-y show on Freeform. Lots of action, lots of glam and very current with social media references and such. Light entertainment with lots of action and less emphasis on character feelings and such.

Thanks to Simon & Schuster (Scythe, Fate of Flames), 47North (Mosaic), Penguin Teen (Black Moon) and Hyperion (Spindle) for providing the books for review. Want more details on my impression of these and other books? Check out my ratings and full reviews at Goodreads.