It’s my final Book Beat of the year! I’ll end 2016 with magical, whimsical tales which include a couple of very different books with non-binary gender main characters. Lots of great stuff to end the year on!

The Secret of a Heart Note by Stacey Lee 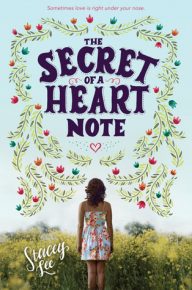 Pitch: Heart-warming contemporary where the family trade is making perfumes that help people fall in love

Story: “An evocative novel about a teen aroma expert who uses her extrasensitive sense of smell to mix perfumes that help others fall in love while protecting her own heart at all costs

Sometimes love is right under your nose. As one of only two aromateurs left on the planet, sixteen-year-old Mimosa knows what her future holds: a lifetime of weeding, mixing love elixirs, and matchmaking—all while remaining incurably alone. For Mim, the rules are clear: falling in love would render her nose useless, taking away her one great talent. Still, Mimosa doesn’t want to spend her life elbow-deep in soil and begonias. She dreams of a normal high school experience with friends, sports practices, debate club, and even a boyfriend. But when she accidentally gives an elixir to the wrong woman and has to rely on the lovesick woman’s son, the school soccer star, to help fix the situation, Mim quickly begins to realize that falling in love isn’t always a choice you can make.

At once hopeful, funny, and romantic, Stacey Lee’s The Secret of a Heart Note is a richly evocative coming-of-age story that gives a fresh perspective on falling in love and finding one’s place in the world.”

Quick take: Sweet and funny, this is a unique book with a dreamy, fable-like quality. It’s grounded with great characters and complicated relationships. It’s also refreshing to see that Mim isn’t perfect — so many of her problems are due to her own mistakes and she needs to work to make amends when all hell breaks loose. This is a great read and a beautiful tale.

The author, Stacey Lee, is offering hand-written perfume recipes for the first 100 people to pre-order the book and submit proof. For more details, head over to her website.

When the Moon was Ours by Anna-Marie McLemore 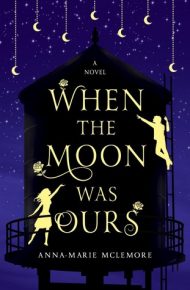 Pitch: A unique, dreamy and somber love story featuring a transgender character in a mgaical world

Story: “To everyone who knows them, best friends Miel and Sam are as strange as they are inseparable. Roses grow out of Miel’s wrist, and rumors say that she spilled out of a water tower when she was five. Sam is known for the moons he paints and hangs in the trees, and for how little anyone knows about his life before he and his mother moved to town. But as odd as everyone considers Miel and Sam, even they stay away from the Bonner girls, four beautiful sisters rumored to be witches. Now they want the roses that grow from Miel’s skin, convinced that their scent can make anyone fall in love. And they’re willing to use every secret Miel has fought to protect to make sure she gives them up.”

Quick take: As whimsical as this world may be, this is a rather emotional and sad tale since there’s a whole lot of prejudice going on. It’s worth reading all the pain for the bigger message about accepting people for who they are, no matter the race, sexuality or gender. It’s so full of emotion, this book will hopefully open privileged eyes to what it’s like to be marginalized 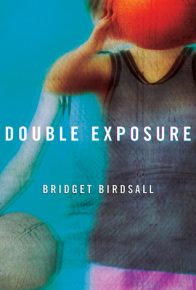 Pitch: Terrific, easy and tough read about an intersex teen looking for a fresh start

Story: “Fifteen-year-old Alyx Atlas was raised as a boy, yet she knows something others don’t. She’s a girl. And after her dad dies, it becomes painfully obvious that she must prove it now—to herself and to the world. Born with ambiguous genitalia, Alyx has always felt a little different. But it’s after she sustains a terrible beating behind a 7-Eleven that she and her mother pack up their belongings and move from California to Milwaukee, Wisconsin, to start a new life—and Alyx begins over again, this time as a girl.

Alyx quickly makes new friends, earns a spot on the girls’ varsity basketball team, and for the first time in her life feels like she fits in. That is, until her prowess on the court proves too much for the jealous, hotheaded Pepper Pitmani, who sets out to uncover Alyx’s secret. A dangerous game of Truth or Dare exposes Alyx’s difference and will disqualify her entire basketball team from competing in the state championships unless Alyx can prove, once and for all, that she is a girl. But will Alyx find the courage to stand up for the truth of her personhood, or will she do what she’s always done—run away? Whatever she decides, she knows there’s much more at stake than a championship win.”

Quick take: This story is a great way to explore so many difficult subjects realistically and with empathy: intersexuality, bullying, PTSD and more. With all these heavy topics, this may sound like a preachy book, but it’s not. Alyx is very, very human so this is a very realistic and relateable story of a girl who’s an outsider and insecure about everything but her basketball skills.

Ever the Hunted by Erin Summerill 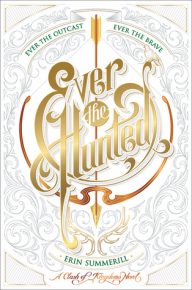 Pitch: Fantasy adventure where a girl is tasked with tracking her father’s killer – the boy who broke her heart

Story: “Seventeen year-old Britta Flannery is at ease only in the woods with her dagger and bow. She spends her days tracking criminals alongside her father, the legendary bounty hunter for the King of Malam—that is, until her father is murdered. Now outcast and alone and having no rights to her father’s land or inheritance, she seeks refuge where she feels most safe: the Ever Woods. When Britta is caught poaching by the royal guard, instead of facing the noose she is offered a deal: her freedom in exchange for her father’s killer.

However, it’s not so simple.

The alleged killer is none other than Cohen McKay, her father’s former apprentice. The only friend she’s ever known. The boy she once loved who broke her heart. She must go on a dangerous quest in a world of warring kingdoms, mad kings, and dark magic to find the real killer. But Britta wields more power than she knows. And soon she will learn what has always made her different will make her a daunting and dangerous force.”

Quick take: Fun, fantasy adventure with a strong romantic thread. A couple of the major plot points are telegraphed, but it’s well-plotted and ends with a cliffhanger. 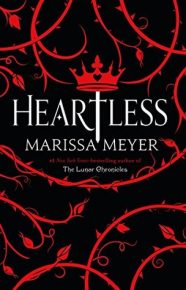 Pitch: The author of The Lunar Chronicles gives her own twist on the backstory for Alice in Wonderland’s Queen of Hearts

Story: “Catherine may be one of the most desired girls in Wonderland and a favorite of the unmarried King, but her interests lie elsewhere. A talented baker, she wants to open a shop and create delectable pastries. But for her mother, such a goal is unthinkable for a woman who could be a queen.

At a royal ball where Cath is expected to receive the King’s marriage proposal, she meets handsome and mysterious Jest. For the first time, she feels the pull of true attraction. At the risk of offending the King and infuriating her parents, she and Jest enter into a secret courtship.

Cath is determined to choose her own destiny. But in a land thriving with magic, madness, and monsters, fate has other plans”

Quick take: Alice in Wonderland isn’t a favorite of mine, but I enjoyed this book. Since there are echoes of Fairest, it didn’t feel as original and fresh as her other books.  Still it’s a lot of fun and fans of Alice in Wonderland will definitely love the path this book takes.

Thanks to Katherine Tegan Books (The Secret of a Heart Note), Macmillan (When the Moon Was Ours, Heartless), HMH (Ever the Hunted) and Bridget Birdsall (Double Exposure) for providing the books for review. Want more details on my impression of these and other books? Check out my ratings and full reviews at Goodreads.

Happy holidays and good reading to everyone!