Home / Book Beat • Book Reviews • The Lovely Erica / Book Beat quick takes on The Upside of Unrequited! Given to the Sea! Alex & Eliza!

I can finally talk about one of my most anticipated books of 2017! I LOVED Simon vs the Homo Sapiens Agenda so a new book from Becky Albertalli is always a cause for celebration! But there are more terrific titles this month! Hamilton fans will be excited to read Alex & Eliza, there’s a great fantasy by Mindy McGinnis and a fun new take on Cinderella. (No fooling!)

The Upside of Unrequited by Becky Albertalli 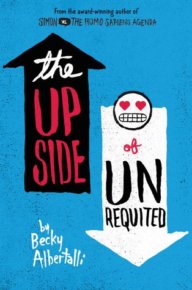 Pitch: Contemporary YA story for anyone who doesn’t feel like the star in their own story

Story: “Seventeen-year-old Molly Peskin-Suso knows all about unrequited love. No matter how many times her twin sister, Cassie, tells her to woman up, Molly can’t stomach the idea of rejection. So she’s careful. Fat girls always have to be careful.

Then a cute new girl enters Cassie’s orbit, and for the first time ever, Molly’s cynical twin is a lovesick mess. Meanwhile, Molly’s totally not dying of loneliness—except for the part where she is. Luckily, Cassie’s new girlfriend comes with a cute hipster-boy sidekick. If Molly can win him over, she’ll get her first kiss and she’ll get her twin back.

There’s only one problem: Molly’s coworker, Reid. He’s a chubby Tolkien superfan with a season pass to the Ren Faire, and there’s absolutely no way Molly could fall for him.

Quick take: Molly is the insecure teen inside all of us. We’ve all been in her place in so many ways on so many days. This book is heartbreaking, heartwarming, funny and so hopeful. Also, there are a few cameos for fans of Simon vs the Homo Sapiens Agenda!

Given to the Sea by Mindy McGinnis 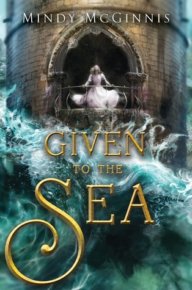 Pitch: Beautifully written fantasy about destiny and duty (with lots of curveballs)

Story: “Khosa is Given to the Sea, a girl born to be fed to the water, her flesh preventing a wave like the one that destroyed the Kingdom of Stille in days of old. But before she’s allowed to dance – an uncontrollable twitching of the limbs that will carry her to the shore in a frenzy – she must produce an heir. Yet the thought of human touch sends shudders down her spine that not even the sound of the tide can match.

Vincent is third in line to inherit his throne, royalty in a kingdom where the old linger and the young inherit only boredom. When Khosa arrives without an heir he knows his father will ensure she fulfills her duty, at whatever cost. Torn between protecting the throne he will someday fill, and the girl whose fate is tied to its very existence, Vincent’s loyalty is at odds with his heart.

Dara and Donil are the last of the Indiri, a native race whose dwindling magic grows weaker as the island country fades. Animals cease to bear young, creatures of the sea take to the land, and the Pietra – fierce fighters who destroyed the Indiri a generation before – are now marching from their stony shores for the twin’s adopted homeland, Stille.

Witt leads the Pietra, their army the only family he has ever known. The stone shores harbor a secret, a growing threat that will envelop the entire land – and he will conquer every speck of soil to ensure the survival of his people.

The tides are turning in Stille, where royals scheme, Pietrans march, and the rising sea calls for its Given.”

Quick take: As that complicated story pitch shows, there’s a lot going on, but the writing is so light and elegant that it all makes sense. It’s hard to describe, but this is a unique book among YA fantasies and it doesn’t pull any punches. There’s a lot of blood, forbidden romance, savage fight scenes and ruthless deeds so there’s something for everyone. 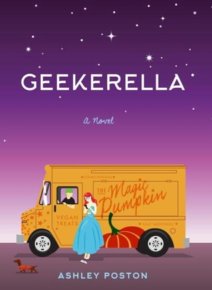 Pitch: A very cute and clever update of Cinderella with a dash of The Shop Around the Corner/You’ve Got Mail

Story: “Geek girl Elle Wittimer lives and breathes Starfield, the classic sci-fi series she grew up watching with her late father. So when she sees a cosplay contest for a new Starfield movie, she has to enter. The prize? An invitation to the ExcelsiCon Cosplay Ball, and a meet-and-greet with the actor slated to play Federation Prince Carmindor in the reboot. With savings from her gig at the Magic Pumpkin food truck (and her dad’s old costume), Elle’s determined to win…unless her stepsisters get there first.

Teen actor Darien Freeman used to live for cons—before he was famous. Now they’re nothing but autographs and awkward meet-and-greets. Playing Carmindor is all he’s ever wanted, but Starfield fandom has written him off as just another dumb heartthrob. As ExcelsiCon draws near, Darien feels more and more like a fake—until he meets a girl who shows him otherwise. But when she disappears at midnight, will he ever be able to find her again?

Part romance, part love letter to nerd culture, and all totally adorbs, Geekerella is a fairy tale for anyone who believes in the magic of fandom.”

Quick take: There are lots of cute ways the important story beats of Cinderella are included in this tale that’s filled with lots of fun pop culture references. It’s fresh enough that this doesn’t re-tread the fairy tale and builds its own charm. 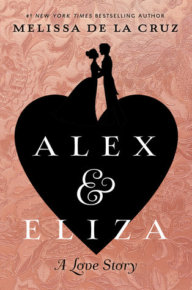 Pitch: Historical fiction about the courtship of Alexander Hamilton and Eliza Schuyler (aka “Helpless” from the musical Hamilton)

Story: “From the #1 New York Times bestselling author of The Witches of East End and The Descendants comes the love story of young Alexander Hamilton and Eliza Schuyler.

As battle cries of the American Revolution echo in the distance, servants flutter about preparing for one of New York society’s biggest events: the Schuylers’ grand ball. Descended from two of the oldest and most distinguished bloodlines in New York, the Schuylers are proud to be one of their fledgling country’s founding families, and even prouder still of their three daughters—Angelica, with her razor-sharp wit; Peggy, with her dazzling looks; and Eliza, whose beauty and charm rival that of both her sisters, though she’d rather be aiding the colonists’ cause than dressing up for some silly ball.

Still, she can barely contain her excitement when she hears of the arrival of one Alexander Hamilton, a mysterious, rakish young colonel and General George Washington’s right-hand man. Though Alex has arrived as the bearer of bad news for the Schuylers, he can’t believe his luck—as an orphan, and a bastard one at that—to be in such esteemed company. And when Alex and Eliza meet that fateful night, so begins an epic love story that would forever change the course of American history.

Quick take: The actual details of their courtship are lost to history so Melissa de la Cruz’s gets a lot of room to play. Alex has a much more complicated relationship with the Schuylers and, oh, there are other suitors for Eliza. It’s a lovely romance that will satisfy Hamilton fans who want to know more about this remarkable couple before all the heartache of their later years.

Defy the Stars by Claudia Gray 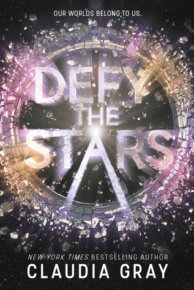 Pitch: Science fiction/romance/adventure with questions about faith, soul and humanity

Story: “Noemi Vidal is a teen soldier from the planet Genesis, once a colony of Earth that’s now at war for its independence. The humans of Genesis have fought Earth’s robotic “mech” armies for decades with no end in sight.

After a surprise attack, Noemi finds herself stranded in space on an abandoned ship where she meets Abel, the most sophisticated mech prototype ever made. One who should be her enemy. But Abel’s programming forces him to obey Noemi as his commander, which means he has to help her save Genesis–even though her plan to win the war will kill him.

Together they embark on a daring voyage through the galaxy. Before long, Noemi begins to realize Abel may be more than a machine, and, for his part, Abel’s devotion to Noemi is no longer just a matter of programming.”

Quick take: A lot of the questions are explored, but not yet answered as the book clearly leaves the door open for the next in the series. There’s a complex set up that takes a bit of set up, but then the focus switches to the best part of the book – Noemi and Abel and their relationship and future. 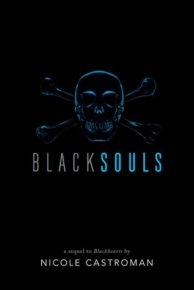 Pitch: The continuation of Blackbeard’s origin story which began in Blackhearts

Story: “Edward ‘Teach’ Drummond is setting sail to the Caribbean as first mate on the most celebrated merchant ship in the British fleet—until he rebels against his captain. Mutiny is a capital offense and Teach knows it could cost him his life, but he believes it worth the risk in order to save his crew from the attacking Spanish ships.

Sailing on the same blue waters, Anne barely avoids the Spanish attack, making it safely to Nassau. But lawless criminals, corrupt politics, and dangerous intentions fill the crowded streets of this Caribbean port. Soon, Anne discovers that the man entrusted to keep the peace is quite possibly the most treacherous of them all—and he just happens to hold Teach’s fate in his terrifying hands.

Life and death hang in the balance when Teach and Anne are given a dangerous mission. It’s a mission that will test their love, loyalty and devotion, forcing them down a path neither one could have ever imagined.”

Quick take: If you enjoyed the big romance between Teach and Anne in Blackhearts, you’ll love the continued struggle for them to find a way to be together. This book ups the ante with a whole lot more adventure with big battle scenes, fisticuffs and switching allegiances.

Duels and Deception by Cindy Anstey 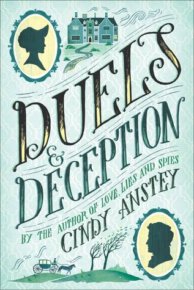 Pitch: Some cute banter and a feisty heroine in this historical fiction

Story: “Miss Lydia Whitfield, heiress to the family fortune, has her future entirely planned out. She will run the family estate until she marries the man of her late father’s choosing, and then she will spend the rest of her days as a devoted wife. Confident in those arrangements, Lydia has tasked her young law clerk, Mr. Robert Newton, to begin drawing up the marriage contracts. Everything is going according to plan.

Until Lydia—and Robert along with her—is kidnapped. Someone is after her fortune and won’t hesitate to destroy her reputation to get it. With Robert’s help, Lydia strives to keep her family’s good name intact and expose whoever is behind the devious plot. But as their investigation delves deeper and their affections for each other grow, Lydia starts to wonder whether her carefully planned future is in fact what she truly wants…”

Quick take: Her first book, Love, Lies and Spies, was cute. This time around, I didn’t connect with the characters and plot as much since I felt it was too melodramatic and over the top.

Thanks to Harper Teen (The Upside of Unrequited), Penguin Teen (Given to the Sea, Alex & Eliza), Quirk (Geekerella), Little, Brown (Defy the Stars), Simon and Schuster (Blacksouls) and Swoon Reads (Duels and Deception) for providing the books for review. Want more details on my impression of these and other books? Check out my ratings and full reviews at Goodreads. 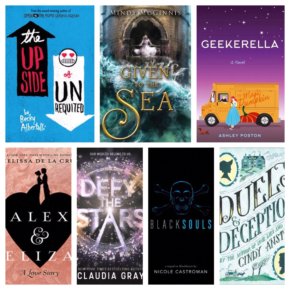