Another successful New York Comic Con is in the books! Cold weather, pouring rain and unsuccessful lotteries were not enough to stop the fans from having a great weekend! I had a fantastic bookish con and here’s a quick recap of my spoils of war!

NYCC is always a great preview of the next six months of books.  Look for contemporary authors venturing into fantasy, sibling stories, (under) water stories, and books with everyone’s favorite YA description: “for fans of Sabaa Tahir.”

(If there’s no date after the description, it means the book is available now so you can seek out your next read immediately!)

The publishers weren’t playing when they brought some highly anticipated titles. As soon as these were announced, I rearranged my schedule for these book drops! 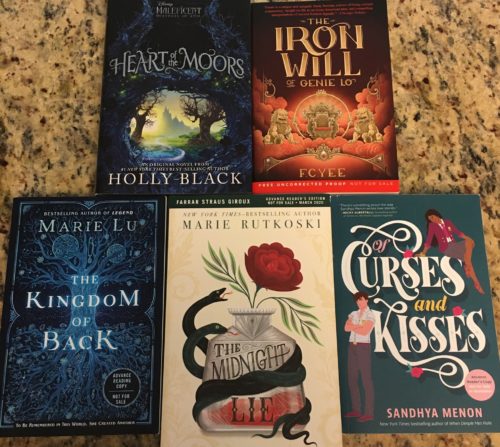 Heart of the Moors: An Original Maleficent: Mistress of Evil Novel by Holly Black

Perhaps the most perfect match between author and subject, Holly Black’s novel bridges what happens between the two Maleficent movies. This book is out now and Maleficent: Mistress of Evil is out this weekend.

The Iron Will of Genie Lo by F.C. Yee

It’s been a while since The Iron Crush of Genie Lo debuted. That book was truly a fresh and original YA Asian Buffy the Vampire Slayer with its humor and thrills. I really enjoyed that one and I’m excited the sequel is finally coming! (January 21)

The Kingdom of Back by Marie Lu

Any Marie Lu book is a book I want to read and, judging by the huge crowd, many people feel that way! Her first historical fiction, it’s the story of rival musical siblings — think Mozart and Salieri. (March 3)

The Midnight Lie by Marie Rutkoski

I loved her Winner’s trilogy so I definitely need to read anything else she writes.  This book is set in the same world as that trilogy, so expect a lush and romantic non-magical fantasy. (March 3)

Of Curses and Kisses by Sandhya Menon

Her previous books are adorable contemporary rom-coms so this new series is a bit of a departure since its a contemporary take on Beauty and the Beast with a few dashes of fantasy. (February 18)

But wait! There’s more!  There is another bunch of books I am also really excited to read! 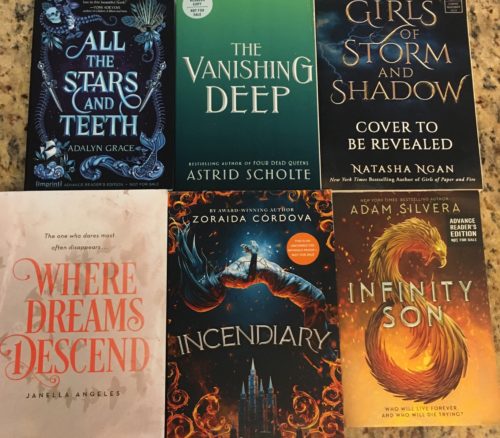 All the Stars and Teeth by Adalyn Grace

Mermaids and pirates! What else do you need to know from this debut author? (February 4)

The Vanishing Deep by Astrid Scholte

A new novel from the author of Four Dead Queens, The Vanishing Deep is an underwater dystopian with a secret conspiracy. (March 3)

Girls of Storm and Shadow by Natasha Ngan

The sequel to Girls of Paper and Fire, this is an LGBT fantasy about a rebel uprising. (November 5)

Where Dreams Descend by Janella Angeles

I stopped reading the description after I read “Phantom of the Opera meets Moulin Rouge.” (June 2)

A new fantasy series about revenge, magic and a memory thief. (April 28)

NYCC had a huge list of terrific authors including Sarah J Maas, Holly Black, Marie Lu, Renee Ahdieh, Victoria Schwab and so much more. I managed to make it to the signings for some authors who are new to me. 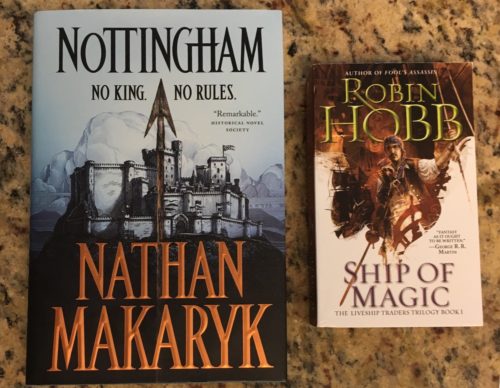 Ship of Magic by Robin Hobb

Known for Assassin’s Apprentice which is getting a deluxe 25th anniversary edition, I’m interested in dipping my toe in her waters with this fantasy on the high seas.

There are so many versions of Robin Hood out there.  Funny enough, Nathan cites the Russel Crowe Robin Hood movie as his favorite version since it’s gritty, but it “got so many things wrong.” So this novel is basically his fan fic to get it right!

Books I didn’t know I needed

The fun of going to a pop culture convention is the new stuff you discover. I had to be super picky since my suitcase space is limited, but there’s a ton of titles I discovered. 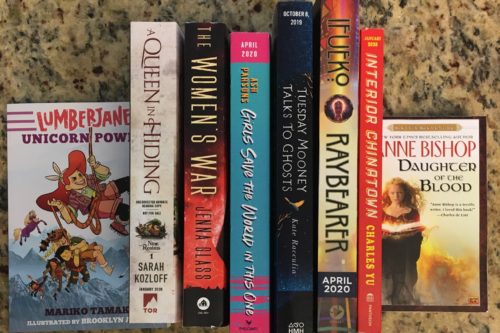 I’ve heard many things about Lumberjanes so I’m excited to finally read it for myself!

A Queen in Hiding by Sarah Kozloff

It’s the start of a new series, but all four books are set to release a month apart so you don’t have to wait long to read the full series about a guerilla fighter who must transform into a queen. (January 21)

The Women’s War by Jenna Glass

Penguin Random House was trying a new thing where the computer asked a bunch of questions to pick the right book for you. (The questions were totally leading since they were for specific books.) However, the booth worker was so excited about this feminist fantasy about women taking control of their reproductive rights that I’m on board as well.

Girls Save the World in This One by Ash Parsons

I’m not a horror or zombie fan, but this is a geeky comedy so who doesn’t want to read “Shaun of the Dead meets Clueless”? (April 14)

An adult The Westing Game? Yes please! A dying billionaire sets up a treasure hunt to find the heir.

A debut author, Jordan Ifueko’s book is a magical fantasy about family and loyalty. (April 4)

Charles Yu is an award winning novel and screenplay writer and he uses both forms in this book about pop culture, immigration, assimilation and race. Quirky and serious, this should be an interesting read. (January 28)

Daughter of the Blood by Anne Bishop

The first in a popular series, its got witches, magic, dark magic, politics, betrayal and romance.  Sounds okay, right?