Home / Book Beat • Book Reviews • The Lovely Erica / Book Beat quick takes on The a Prince and the Dressmaker! Daughter of the Siren Queen! These Vengeful Souls!

This Book Beat round up features a graphic novel, a bunch of fantasy titles, a few historic fantasies, a couple of series-ender’s and a couple of contemporary books that tackles some serious issues. So a little something for everyone, right?

The Prince and the Dressmaker by Jen Wang 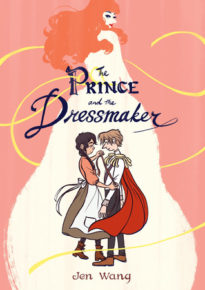 Pitch: A heart-warming graphic novel about a prince who likes to wear fabulous dresses

Story: “Paris, at the dawn of the modern age:

Prince Sebastian is looking for a bride―or rather, his parents are looking for one for him. Sebastian is too busy hiding his secret life from everyone. At night he puts on daring dresses and takes Paris by storm as the fabulous Lady Crystallia―the hottest fashion icon in the world capital of fashion!

Sebastian’s secret weapon (and best friend) is the brilliant dressmaker Frances―one of only two people who know the truth: sometimes this boy wears dresses. But Frances dreams of greatness, and being someone’s secret weapon means being a secret. Forever. How long can Frances defer her dreams to protect a friend? Jen Wang weaves an exuberantly romantic tale of identity, young love, art, and family. A fairy tale for any age, The Prince and the Dressmaker will steal your heart.”

Quick take: An adorable fairy tale with a big heart and upbeat message. The artwork is so expressive it’ll break your heart and make you laugh. Truly a heartwarming story that shouldn’t be missed.

Daughter of the Siren Queen by Tricia Levenseller 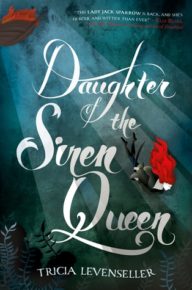 Pitch: A fun and satisfying conclusion to this rollicking fantasy pirate duology

Story: “Alosa’s mission is finally complete. Not only has she recovered all three pieces of the map to a legendary hidden treasure, but the pirates who originally took her captive are now prisoners on her ship. Still unfairly attractive and unexpectedly loyal, first mate Riden is a constant distraction, but now he’s under her orders. And she takes great comfort in knowing that the villainous Vordan will soon be facing her father’s justice.

When Vordan exposes a secret her father has kept for years, Alosa and her crew find themselves in a deadly race with the feared Pirate King. Despite the danger, Alosa knows they will recover the treasure first . . . after all, she is the daughter of the Siren Queen.”

Quick take: This book is more of a personal story as Alosa’s relationship with her father changes and she tries to find a way to deal with her feral siren nature. There are plenty of surprises, tons of action and lots of lady pirates taking charge! 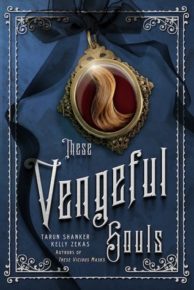 Pitch: The final book in this fun trilogy about superheroes in Victorian England

Story: “England, 1883. On the run with the grieving Sebastian Braddock, Evelyn wants two things: to be reunited with her friends, and to get revenge on the evil Captain Goode. Not only has he misused his and Sebastian’s powers to rack up a terrible death toll, but he’s also completely destroyed any hope of Evelyn or her friends regaining the life they once knew.

Evelyn is determined to make Captain Goode pay for what he’s done, but is her revenge worth risking the lives of Sebastian and her friends? Or is it better to flee the city and focus on staying alive? And with the Captain spreading lies about Sebastian in an attempt to flush them out of hiding and turn the populace against them, does she even have a choice at all?”

Quick take: A worthy end to this trilogy with superheroes of varying superpowers in Victorian England. It’s action-packed, funny, inclusive and lots of fun. A really refreshing take on superheroes. 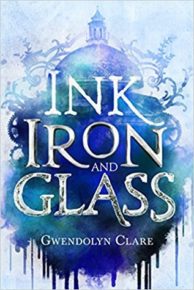 Story: “Can she write a world gone wrong?

A certain pen, a certain book, and a certain person can craft entirely new worlds through a branch of science called scriptology. Elsa comes from one such world that was written into creation by her mother—a noted scriptologist.

But when her home is attacked and her mother abducted, Elsa must cross into the real world and use her own scriptology gifts to find her. In an alternative 19th-century Italy, Elsa finds a secret society of pazzerellones—young people with a gift for mechanics, alchemy or scriptology—and meets Leo, a gorgeous mechanist with a smart mouth and a tragic past. She recruits the help of these fellow geniuses just as an assassin arrives on their doorstep.”

Quick take: This book has really unique world building with its Italian states setting and different rules for magic. There’s a big mystery and lots of twists and turns with fun and fantastic little inventions. If you’re a fan of steampunk, this is a refershing new voice. If you’re not into steampunk, it’s a fun historic fantasy. Regardless, it’s an adventure with unusual ideas. 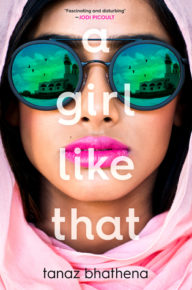 Pitch: A tough contemporary read that highlights some universal truths, no matter the country or religion

Story: “A timeless exploration of high-stakes romance, self-discovery, and the lengths we go to love and be loved.

Sixteen-year-old Zarin Wadia is many things: a bright and vivacious student, an orphan, a risk taker. She’s also the kind of girl that parents warn their kids to stay away from: a troublemaker whose many romances are the subject of endless gossip at school. You don’t want to get involved with a girl like that, they say. So how is it that eighteen-year-old Porus Dumasia has only ever had eyes for her? And how did Zarin and Porus end up dead in a car together, crashed on the side of a highway in Jeddah, Saudi Arabia? When the religious police arrive on the scene, everything everyone thought they knew about Zarin is questioned. And as her story is pieced together, told through multiple perspectives, it becomes clear that she was far more than just a girl like that.

This beautifully written debut novel from Tanaz Bhathena reveals a rich and wonderful new world to readers. It tackles complicated issues of race, identity, class, and religion, and paints a portrait of teenage ambition, angst, and alienation that feels both inventive and universal.”

Quick take: At its core, this is the story about a girl dealing with bullying, finding the right boy and finding a way to live with her difficult and complicated family. Universal themes. A Girl Like That is set in Saudi Arabia where women’s rights are severely restricted and highlights the limits on their choices for anything. It’s a tough read, but also an important one. 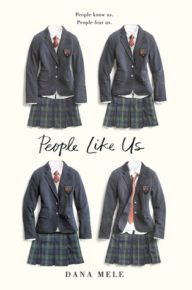 Pitch: A bingeable mystery with an interesting format

Story: “Kay Donovan may have skeletons in her closet, but the past is past, and she’s reinvented herself entirely. Now she’s a star soccer player whose group of gorgeous friends run their private school with effortless popularity and acerbic wit. But when a girl’s body is found in the lake, Kay’s carefully constructed life begins to topple.

The dead girl has left Kay a computer-coded scavenger hunt, which, as it unravels, begins to implicate suspect after suspect, until Kay herself is in the crosshairs of a murder investigation. But if Kay’s finally backed into a corner, she’ll do what it takes to survive. Because at Bates Academy, the truth is something you make…not something that happened.”

Quick take: The unique structure uses a sort of scavenger hunt to explore different suspects and more bad things that happen along the way. This book also tackles some current topics like bullying, cyber bullying and different social-economic groups which is a lot to pack in here.

Thanks to Macmillan (The Prince and the Dressmaker, Daugher of the Siren Queen, These Vengeful Souls, Ink, Iron and Glass, A Girl Like That) and Penguin Teen (People Like Us) for providing the books for review. Want more details on my impression of these and other books? Check out my ratings and full reviews at Goodreads. 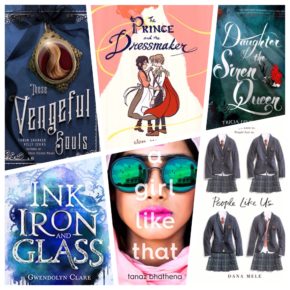