April through June are some really packed book months!  There are tons of book events, lots of authors on tour and some super huge book release dates. Over the next 2 weeks, there are some highly-anticipated titles and, yes, my wallet is definitely feeling it!

Here are my quick takes to help you navigate the book stores without going broke! Also, May is Mental Health Awareness month (read all about it here) and this edition of Book Beat has a couple of terrific books which feature characters with mental health issues.

The Unexpected Everything by Morgan Matson 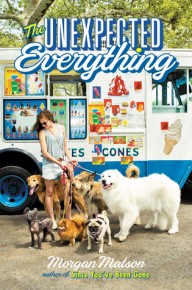 Pitch: What happens when a perfectly scripted life goes off the rails?

Story: “Andie had it all planned out.

When you are a politician’s daughter who’s pretty much raised yourself, you learn everything can be planned or spun, or both. Especially your future.

But that was before the scandal. Before having to be in the same house with her dad. Before walking an insane number of dogs. That was before Clark and those few months that might change her whole life.

Because here’s the thing – if everything’s planned out, you can never find the unexpected.
And where’s the fun in that?”

Quick take: I love Morgan Matson books. She writes contemporary YA with realistic characters and a lot of heart. If you’re a fan of her books, this is a worthy book to her book list and you’ll cheer for a certain cameo appearance. As always, her characters are fresh and the friendships between the girls and guys are all fun. This is a great summer read and a must for those who like contemporary YA fiction.

Available: May 3rd. There’s a thank-you gift for per-orders in the form of a t-shirt so submit your receipts to www.morganmatson.com Morgan is headed on a book tour so check out her schedule to see if she’s headed somewhere near you. Also, Target will have a special edition of the book with Andie’s playlist and more deleted scenes with an extended cameo.

Whisper to Me by Nick Lake 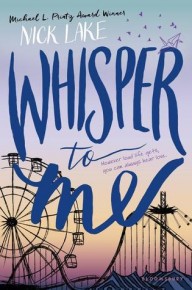 Pitch: Beautifully written story about a girl coming terms with some tough events

Cassie is writing a letter to the boy whose heart she broke. She’s trying to explain why. Why she pushed him away. Why her father got so angry when he saw them together. Why she disappears some nights. Why she won’t let herself remember what happened that long-ago night on the boardwalk. Why she fell apart so completely.

Desperate for his forgiveness, she’s telling the whole story of the summer she nearly lost herself. She’s hoping he’ll understand as well as she now does how love—love for your family, love for that person who makes your heart beat faster, and love for yourself—can save you after all.”

Quick take: Beautiful and challenging. This is a tough book to read since Nick Lake does an amazing job of putting you into Cassie’s head and things aren’t very happy there. Cassie is dealing with a lot of repressed trauma and she’s all alone since her dad has issues, too. Cassie’s pain is tough which makes this a challenging read, but the writing is sad and witty and beautiful. A must read for those looking for stories about mental health. 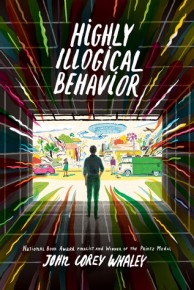 Story: “Sixteen-year-old Solomon is agoraphobic. He hasn’t left the house in three years, which is fine by him.

Ambitious Lisa desperately wants to get into the second-best psychology program for college (she’s being realistic). But how can she prove she deserves a spot there?

Solomon is the answer.

Determined to ‘fix’ Sol, Lisa thrusts herself into his life, introducing him to her charming boyfriend Clark and confiding her fears in him. Soon, all three teens are far closer than they thought they’d be, and when their facades fall down, their friendships threaten to collapse, as well.”

Quick Take: Yes, this is another book about mental illness, but this one is much lighter in tone, though there’s a deep message that’s just as meaningful. This book is funny, sad and has lots to say, but it doesn’t feel like a lecture. Lisa, Sol and Clark are so fun and witty that the first half of this book flies by as they build a bond. Sol really is just like any other kid their age which is the morale of the story: people with mental issues should not be swept aside and forgotten. 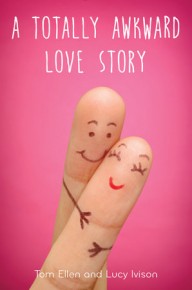 Story: “Sam and Hannah only have the holidays to find ‘The One.’ Their lobster. But instead of being epic, their summer is looking awkward. They must navigate social misunderstandings, the plotting of well-meaning friends, and their own fears of being virgins for ever to find happiness. But fate is at work to bring them together. And in the end, it all boils down to love.”

Quick take: This is a cute romance of two teens who have an immediate connection, but can’t seem to get together. The story is told from both Hannah and Sam’s perspective as they crush, bruise and hope their way through this love story. It’s nice to see a fully fleshed out male perspective by a male author to balance out the story. There’s some frank discussion about sex and Hannah’s frenemy may also grate on folks, but it’s a fun story of the joyful rush and pain of first love.

Summer of Supernovas by Darcy Woods 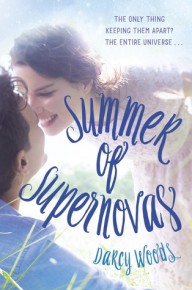 Story: “Fans of Jennifer E. Smith and Jenny Han will fall in love with this heartfelt and humor-laced debut following one girl’s race to find the guy of her cosmic dreams.

When zodiac-obsessed teen Wilamena Carlisle discovers a planetary alignment that won’t repeat for a decade, she’s forced to tackle her greatest astrological fear: The Fifth House—relationships and love.

But when Wil falls for a sensitive guitar player hailing from the wrong side of the astrology chart, she must decide whether a cosmically doomed love is worth rejecting her dead mother’s legacy and the very system she’s faithfully followed through a lifetime of unfailing belief.”

Quick take: Funny and aching, this story is all about a love triangle. There is more to Wil than these boys, but these aspects and conflicts are only lightly touched upon and I wish we had a bit more resolution to really round out her story. Still this is a confection of a love story and an enjoyable contemporary romance 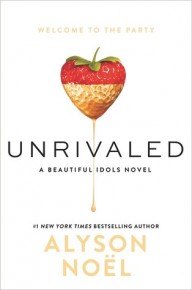 Story: “Everyone wants to be someone.

Layla Harrison wants to leave her beach-bum days for digs behind a reporter’s desk. Aster Amirpour wants to scream at the next casting director who tells her ‘we need ethnic but not your kind of ethnic.’ Tommy Phillips dreams of buying a twelve-string guitar and using it to shred his way back into his famous absentee dad’s life.

But Madison Brooks took destiny and made it her bitch a long time ago.

She’s Hollywood’s hottest starlet, and the things she did to become the name on everyone’s lips are merely a stain on the pavement, ground beneath her Louboutin heel.

That is, until Layla, Aster, and Tommy find themselves with a VIP invite to the glamorous and gritty world of Los Angeles’s nightlife and lured into a high-stakes competition where Madison Brooks is the target. Just as their hopes begin to gleam like stars through the California smog, Madison Brooks goes missing. . . . And all of their hopes are blacked out in the haze of their lies.”

Quick take: This is a gritty/glitzy soap opera. While it is over 400 pages, it goes fast as each of the three main characters try to work the system to win. This isn’t meant to be a deep character study or to provide big life lessons on why we’re on this planet. Read this for a sudsy page-turner with a cliffhanger ending.

The Lie Tree by Frances Hardinge 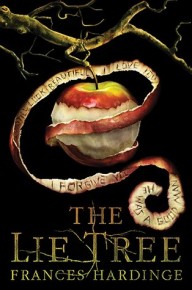 Story: “In this deliciously creepy novel by the author of the critically acclaimed Cuckoo Song, the fruit of a magical tree uncovers dangerous truths

Faith Sunderly leads a double life. To most people, she is reliable, dull, trustworthy—a proper young lady who knows her place as inferior to men. But inside, Faith is full of questions and curiosity, and she cannot resist mysteries: an unattended envelope, an unlocked door. She knows secrets no one suspects her of knowing. She knows that her family moved to the close-knit island of Vane because her famous scientist father was fleeing a reputation-destroying scandal. And she knows, when her father is discovered dead shortly thereafter, that he was murdered.

In pursuit of justice and revenge, Faith hunts through her father’s possessions and discovers a strange tree. The tree only bears fruit when she whispers a lie to it. The fruit of the tree, when eaten, delivers a hidden truth. The tree might hold the key to her father’s murder—or it may lure the murderer directly to Faith herself.”

Quick take: A very slow murder mystery with a unique tree. There are some nice twists to the mystery as well, but this is anything but a brisk whodunnit since it’s more about the gothic atmosphere.

Thanks to Simon & Schuster (The Unexpected Everything), Bloomsbury (Whisper to Me), Penguin Random House (A Totally Awkward Love Story, Summer of Supernovas and Highly Illogical Behavior), HarperCollins (Unrivaled) and ABRAMs (The Lie Tree) for providing the books for review. Want more details on my impression of these and other books? Check out my ratings and full reviews at GoodReads.

All of that and there are still a lot of great books on their way! If you’re looking for something more check out:

That’s plenty of books to keep you occupied, right?

Last Saturday, I squeezed in a quick trip to the Chicago YA Lit Fest which was TONS of fun! It’s a day of panels and discussion followed by the most relaxed book signing. The signing takes place at the adorable Book Cellar and its basically just a cozy gathering. There’s wine, there’s snacks and lots of authors! I’ll have more on this shortly, but I’m running around at YallWest this weekend! I’m here with The Novel Sturmpet (Alicia) and we’ll have lots of stories and swag to share!

I did mention that it’s bookishly crazy this month right?