It’s July already! Can you believe it? This edition of Book Beat features a couple of terrific contemporary books featuring some honest and brave heroines. Really, if you want a great emotional read this long weekend, pick up Exit, Pursued by a Bear or The Memory Book.

Exit, Pursued by a Bear by E.K. Johnston 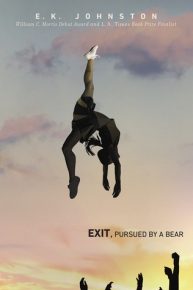 Pitch: The most popular girl in school copes with being drugged and raped

Hermione Winters is captain of her cheerleading team, and in tiny Palermo Heights, this doesn’t mean what you think it means. At PHHS, the cheerleaders don’t cheer for the sports teams; they are the sports team—the pride and joy of a tiny town. The team’s summer training camp is Hermione’s last and marks the beginning of the end of…she’s not sure what. She does know this season could make her a legend. But during a camp party, someone slips something in her drink. And it all goes black.

In every class, there’s a star cheerleader and a pariah pregnant girl. They’re never supposed to be the same person. Hermione struggles to regain the control she’s always had and faces a wrenching decision about how to move on. The assault wasn’t the beginning of Hermione Winter’s story and she’s not going to let it be the end. She won’t be anyone’s cautionary tale”

Quick take: Yes, this is a tough subject and there are moments that are, sadly, just ripped from today’s headlines. This is the story of a woman who is coming to terms with her new life — all on account of someone else’s whim. The writing is beautiful and so honest that you can’t help but get sucked into this story and feel Hermione’s fear, horror, anger and outrage without feeling lectured. It’s an important story and very well told.

The Memory Book by Laura Avery 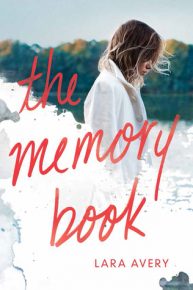 Pitch: A bittersweet tale of a girl recording her life as her memory deteriorates

Story: “They tell me that my memory will never be the same, that I’ll start forgetting things. At first just a little, and then a lot. So I’m writing to remember.

Sammie was always a girl with a plan: graduate at the top of her class and get out of her small town as soon as humanly possible. Nothing will stand in her way–not even a rare genetic disorder the doctors say will slowly start to steal her memories and then her health. What she needs is a new plan.

So the Memory Book is born: Sammie’s notes to her future self, a document of moments great and small. It’s where she’ll record every perfect detail of her first date with longtime crush, Stuart–a brilliant young writer who is home for the summer. And where she’ll admit how much she’s missed her childhood best friend, Cooper, and even take some of the blame for the fight that ended their friendship.

Through a mix of heartfelt journal entries, mementos, and guest posts from friends and family, readers will fall in love with Sammie, a brave and remarkable girl who learns to live and love life fully, even though it’s not the life she planned.”

Quick take: Wonderfully written, this is a bittersweet book that will stay with you. Sammie is funny, and honest and will break your heart. Extra points for the focus on such a tough subject and for featuring diverse characters.

Paper and Fire by Rachel Caine 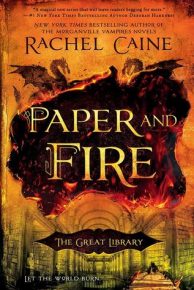 Story: “In Ink and Bone, New York Times bestselling author Rachel Caine introduced a world where knowledge is power, and power corrupts absolutely. Now, she continues the story of those who dare to defy the Great Library—and rewrite history…

With an iron fist, The Great Library controls the knowledge of the world, ruthlessly stamping out all rebellion, forbidding the personal ownership of books in the name of the greater good.

Jess Brightwell has survived his introduction to the sinister, seductive world of the Library, but serving in its army is nothing like he envisioned. His life and the lives of those he cares for have been altered forever. His best friend is lost, and Morgan, the girl he loves, is locked away in the Iron Tower and doomed to a life apart.

Embarking on a mission to save one of their own, Jess and his band of allies make one wrong move and suddenly find themselves hunted by the Library’s deadly automata and forced to flee Alexandria, all the way to London.

But Jess’s home isn’t safe anymore. The Welsh army is coming, London is burning, and soon, Jess must choose between his friends, his family, or the Library willing to sacrifice anything and anyone in the search for ultimate control…”

Quick take: This second book has all the momentum of the first and goes deeper into this world. The star of this series is the world-building (steampunk Egypt!) and the action. It’s a fun fantasy, page-turner with extra points for diversity.

Learning to Swear in America by Katie Kennedy 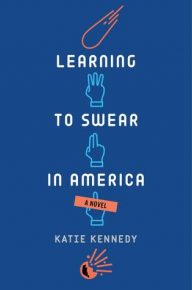 Pitch: Teenage genius tries to save the universe and get the girl

An asteroid is hurtling toward Earth. A big, bad one. Yuri, a physicist prodigy from Russia, has been called to NASA as they calculate a plan to avoid disaster. He knows how to stop the asteroid: his research in antimatter will probably win him a Nobel prize–if there’s ever another Nobel prize awarded. But Yuri’s 17, and having a hard time making older, stodgy physicists listen to him. Then he meets Dovie, who lives like a normal teenager, oblivious to the impending doom. Being with her, on the adventures she plans when he’s not at NASA, Yuri catches a glimpse of what it means to save the world and save a life worth living.

Prepare to laugh, cry, cringe, and have your mind burst open with questions of the universe.”

Quick take: This book starts off quite slow, but picks up about a third of the way through. The story is cute with some light banter, but there’s a LOT of implausible moments. Extra points for diverse characters since it’s really the characters and banter that’s fun.

A Season for Fireflies by Rebecca Maizel 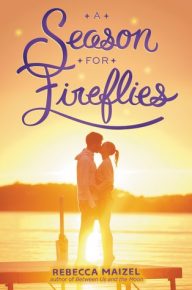 Pitch: A girl tries to win back her friends and first crush after being struck by lightening

Story: “A story of second chances from the author of Between Us and the Moon, which Kirkus Reviews called ‘what first love is meant to be.’

A year ago, Penny Berne was the star of her high school’s theater department, surrounded by a group of misfit friends and falling in love for the first time. Now her old friends won’t talk to her, her new best friend is the most popular girl in school, and her first love, Wes, ignores her. Penny is revered and hated. Then, in a flash, a near-fatal lightning strike leaves Penny with no memory of the past year—or how she went from drama nerd to queen bee.

As a record number of fireflies light up her town and her life, Penny realizes she may be able to make things right again—and that even if she can’t change the past, she can learn to see the magic where she never could before.

This captivating new novel about first love, second chances, and the power of memory is perfect for fans of Lauren Oliver’s Before I Fall and Katie Cotugno’s How to Love”

Quick take: This is a story about redemption with some nice romantic moments. Mostly it just didn’t work very well for me since Penny’s old friends didn’t seem to be worth all her efforts to get back with them.

Thanks to Penguin Random House (Paper and Fire), Poppy/The Novl (The Memory Book), Bloomsbury (Learning to Swear in America) and HarperTeen (A Season for Fireflies) for providing the books for review. Want more details on my impression of these and other books? Check out my ratings and full reviews at Goodreads.