It’s March 15th! Spring is next week and a good portion of the country is covered in snow. (Of course!) It’s a time to snuggle under some blankets and escape to a good read with a great fantasy, fairy tale re-telling or space adventure!

A Crown of Wishes by Roshani Chokshi 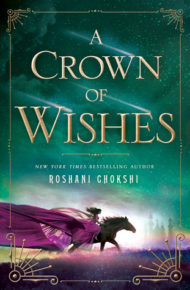 Pitch: Gorgeous and imaginative fantasy with adventure, romance and a good dose of humor

Story: “Gauri, the princess of Bharata, has been taken as a prisoner of war by her kingdom’s enemies. Faced with a future of exile and scorn, Gauri has nothing left to lose. Hope unexpectedly comes in the form of Vikram, the cunning prince of a neighboring land and her sworn enemy kingdom. Unsatisfied with becoming a mere puppet king, Vikram offers Gauri a chance to win back her kingdom in exchange for her battle prowess. Together, they’ll have to set aside their differences and team up to win the Tournament of Wishes—a competition held in a mythical city where the Lord of Wealth promises a wish to the victor.

Reaching the tournament is just the beginning. Once they arrive, danger takes on new shapes: poisonous courtesans and mischievous story birds, a feast of fears and twisted fairy revels.

Every which way they turn new trials will test their wit and strength. But what Gauri and Vikram will soon discover is that there’s nothing more dangerous than what they most desire.” 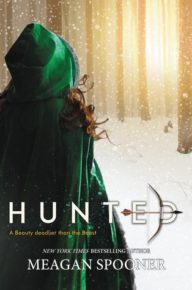 Pitch: Lovely and faithful Beauty and the Beast re-telling

Story: “Beauty knows the Beast’s forest in her bones—and in her blood. Though she grew up with the city’s highest aristocrats, far from her father’s old lodge, she knows that the forest holds secrets and that her father is the only hunter who’s ever come close to discovering them.

So when her father loses his fortune and moves Yeva and her sisters back to the outskirts of town, Yeva is secretly relieved. Out in the wilderness, there’s no pressure to make idle chatter with vapid baronessas…or to submit to marrying a wealthy gentleman. But Yeva’s father’s misfortune may have cost him his mind, and when he goes missing in the woods, Yeva sets her sights on one prey: the creature he’d been obsessively tracking just before his disappearance.

Deaf to her sisters’ protests, Yeva hunts this strange Beast back into his own territory—a cursed valley, a ruined castle, and a world of creatures that Yeva’s only heard about in fairy tales. A world that can bring her ruin or salvation. Who will survive: the Beauty, or the Beast?”

Quick take: Great world building and characters plus the story takes its time to properly set up emotions. The plot pretty much follows the major story beats you expect so there aren’t a ton of twists and surprises. 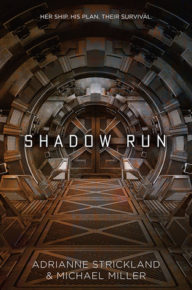 Pitch: “Firefly meets DUNE in this action-packed sci-fi adventure about a close-knit, found family of a crew navigating a galaxy of political intrigue and resource-driven power games.” (from the publisher)

Story: “Nev has just joined the crew of the starship Kaitan Heritage as the cargo loader. His captain, Qole, is the youngest-ever person to command her own ship, but she brooks no argument from her crew of orphans, fugitives, and con men. Nev can’t resist her, even if her ship is an antique.

As for Nev, he’s a prince, in hiding on the ship. He believes Qole holds the key to changing galactic civilization, and when her cooperation proves difficult to obtain, Nev resolves to get her to his home planet by any means necessary.

But before they know it, a rival royal family is after Qole too, and they’re more interested in stealing her abilities than in keeping her alive.

Nev’s mission to manipulate Qole becomes one to save her, and to survive, she’ll have to trust her would-be kidnapper. He may be royalty, but Qole is discovering a deep reservoir of power—and stars have mercy on whoever tries to hurt her ship or her crew.”

Quick take: Dune meets Firefly is a pretty good description if you focus on Dune’s ruling dynasties and spice trade and Firefly’s group of misfits with mysterious pasts. There’s a lot of dense world-building at the start, but once you get passed that, the book settles into its groove and things get good. The best parts of the book are the slow-burn attraction between Qole and Nev and the Dracorte’s greater mission. There’s a satisfying conclusion and clearly a lot left to explore in this universe so bring on the next book in the series! 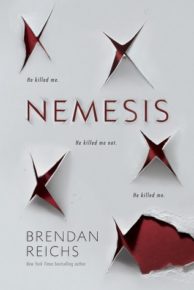 Pitch: I‘d be surprised if anyone can predict the outcome of this twisty thriller

Story: “Orphan Black meets Lord of the Flies in this riveting new thriller from the co-author of the Virals series.

It’s been happening since Min was eight. Every two years, on her birthday, a strange man finds her and murders her in cold blood. But hours later, she wakes up in a clearing just outside her tiny Idaho hometown—alone, unhurt, and with all evidence of the horrifying crime erased.

Across the valley, Noah just wants to be like everyone else. But he’s not. Nightmares of murder and death plague him, though he does his best to hide the signs. But when the world around him begins to spiral toward panic and destruction, Noah discovers that people have been lying to him his whole life. Everything changes in an eye blink.

For the planet has a bigger problem. The Anvil, an enormous asteroid threatening all life on Earth, leaves little room for two troubled teens. Yet on her sixteenth birthday, as she cowers in her bedroom, hoping not to die for the fifth time, Min has had enough. She vows to discover what is happening in Fire Lake and uncovers a lifetime of lies: a vast conspiracy involving the sixty-four students of her sophomore class, one that may be even more sinister than the murders.”

Quick take: There’s lots of action and a huge mystery which takes a bunch of wild left turns and ends up a complete surprise. This is the first book in a series so lots of questions are unanswered. (Lots.) This is also one of those books that ends on a bit of a cliffhanger as well so be prepared for a lot of dangling thoughts at the end of this book. 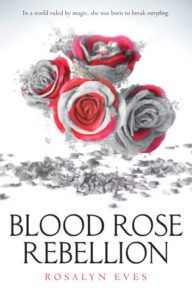 Pitch: Historic fantasy with complex magic rules and a feisty main character who is destined to break the mold of a world that continues to put her down in every way

Story: “The thrilling first book in a YA fantasy trilogy for fans of Red Queen. In a world where social prestige derives from a trifecta of blood, money, and magic, one girl has the ability to break the spell that holds the social order in place.

Sixteen-year-old Anna Arden is barred from society by a defect of blood. Though her family is part of the Luminate, powerful users of magic, she is Barren, unable to perform the simplest spells. Anna would do anything to belong. But her fate takes another course when, after inadvertently breaking her sister’s debutante spell—an important chance for a highborn young woman to show her prowess with magic—Anna finds herself exiled to her family’s once powerful but now crumbling native Hungary.

In Hungary, Anna discovers that nothing is quite as it seems. Not the people around her, from her aloof cousin Noémi to the fierce and handsome Romani Gábor. Not the society she’s known all her life, for discontent with the Luminate is sweeping the land. And not her lack of magic. Isolated from the only world she cares about, Anna still can’t seem to stop herself from breaking spells.

As rebellion spreads across the region, Anna’s unique ability becomes the catalyst everyone is seeking. In the company of nobles, revolutionaries, and Romanies, Anna must choose: deny her unique power and cling to the life she’s always wanted, or embrace her ability and change that world forever.”

Quick take: I love the historic setting and all the loving details about Hungary. The magic rules are pretty convoluted, but Anna seems to be the exception to everything for really technical reasons which became too forced for me.

Queens of Geek by Jen Wilde 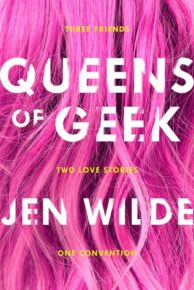 Pitch: A contemporary book, but it’s really a fantasy about geekdom, the power of YouTube stars and pop culture conventions

Story: “When BFFs Charlie, Taylor and Jamie go to SupaCon, they know it’s going to be a blast. What they don’t expect is for it to change their lives forever.

Charlie likes to stand out. SupaCon is her chance to show fans she’s over her public breakup with co-star, Jason Ryan. When Alyssa Huntington arrives as a surprise guest, it seems Charlie’s long-time crush on her isn’t as one-sided as she thought.

Taylor likes to blend in. Her brain is wired differently, making her fear change. And there’s one thing in her life she knows will never change: her friendship with Jamie—no matter how much she may secretly want it to. But when she hears about the Queen Firestone SupaFan Contest, she starts to rethink her rules on playing it safe.”

Quick take: I enjoyed the love of pop culture and the positive messages about body, dealing with anxiety and bisexuality. There are lots of good things here. Sometimes the messages got heavy handed and I found the exaggerated star-wattage of YouTube stars at a huge pop culture convention loaded with movie and TV stars a real stretch. If you adore vloggers, it may speak to your heart.

Thanks to Macmillan (A Crown of Wishes, Queens of Geek), Penguin Random House (Shadow Run, Nemesis, Blood Rose Rebellion) and Harper Teen (Hunted) for providing the books for review. Want more details on my impression of these and other books? Check out my ratings and full reviews at Goodreads. 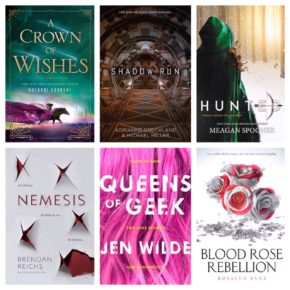