This Book Beat includes a pair of pairs. I review a couple of Star Wars books which give more background on Rogue One’s most intriguing characters. I also have quick takes on two books pitched as “Mulan meets X” and we still have Renee Ahdieh’s wonderful Mulan-inspired Flame in the Mist on the way! (Who knew Mulan was such a big theme for May 2017?) There are also quick takes on several contemporary books and the controversial The Black Witch. Yep, May is a big book month! 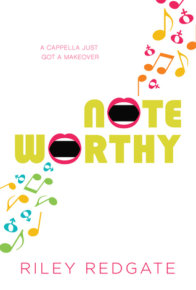 Story: “It’s the start of Jordan Sun’s junior year at the Kensington-Blaine Boarding School for the Performing Arts. Unfortunately, she’s an Alto 2, which—in the musical theatre world—is sort of like being a vulture in the wild: She has a spot in the ecosystem, but nobody’s falling over themselves to express their appreciation. So it’s no surprise when she gets shut out of the fall musical for the third year straight.

Then the school gets a mass email: A spot has opened up in the Sharpshooters, Kensington’s elite a cappella octet. Worshiped … revered … all male. Desperate to prove herself, Jordan auditions in her most convincing drag, and it turns out that Jordan Sun, Tenor 1, is exactly what the Sharps are looking for.”

Quick take: Fun story of a girl determined to find her place no matter what. Lots of laughs, lots of music and Jordan’s disguise brings up all sorts of interesting sexual tension. There are some plot points that I didn’t love, but its an amusing read.

The Traitor’s Kiss by Erin Beaty 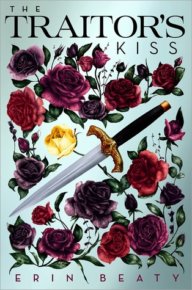 Pitch: The first book in a bloody, non-magical fantasy series with Mulan overtones (without the cross-dressing)

Story: “An obstinate girl who will not be married.
A soldier desperate to prove himself.
A kingdom on the brink of war.

With a sharp tongue and an unruly temper, Sage Fowler is not what they’d call a lady―which is perfectly fine with her. Deemed unfit for marriage, Sage is apprenticed to a matchmaker and tasked with wrangling other young ladies to be married off for political alliances. She spies on the girls―and on the soldiers escorting them.

As the girls’ military escort senses a political uprising, Sage is recruited by a handsome soldier to infiltrate the enemy ranks. The more she discovers as a spy, the less certain she becomes about whom to trust―and Sage becomes caught in a dangerous balancing act that will determine the fate of her kingdom.”

Quick take: This is the start of a huge epic tale with many kingdoms, a long history of war and unique customs. Nora is Mulan-esque as a smart girl who’s unique skills help aid an army under threat of invasion. There’s also a big romance with lots of chemistry between Nora and Ash. There are some gaps in the story so I hope we’ll get more on those in the next installment in the series. 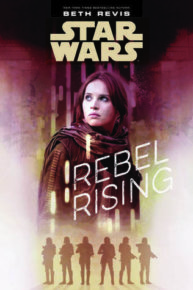 Story: “When Jyn Erso was five years old, her mother was murdered and her father taken from her to serve the Empire. But despite the loss of her parents she is not completely alone—Saw Gerrera, a man willing to go to any extremes necessary in order to resist Imperial tyranny, takes her in as his own, and gives her not only a home but all the abilities and resources she needs to become a rebel herself.

Jyn dedicates herself to the cause—and the man. But fighting alongside Saw and his people brings with it danger and the question of just how far Jyn is willing to go as one of Saw’s soldiers. When she faces an unthinkable betrayal that shatters her world, Jyn will have to pull the pieces of herself back together and figure out what she truly believes in…and who she can really trust.”

Quick take: I loved Rogue One and Jyn Erso was such a great, but mysterious character. This book covers the years between Saw finning Jyn in the cave to her rescue at the beginning of Rogue One. This answers a lot of questions about how Jyn earned all her skills and why she and Saw parted ways. The best part of this book is Jyn’s life in between her split with Saw the the start of Rogue One where, at last, she gets perspective on the Empire/Rebellion conflict and lives a more “normal” life.

Star Wars: Guardians of the Whills by Greg Rucka 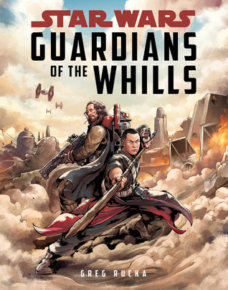 Pitch: Rogue One’s Baze and Chirrut and an earlier encounter with the start of the Rebellion

Quick take: Baze and Chirrut were some of my most intriguing Rogue One characters. They feel the Force, but aren’t Jedi. They belong to a religious sect, but are seasoned warriors. Chirrut is blind but aware of everything. What’s their deal? Star Wars: Guardians of the Whills provides answers about this pair and the life on their planet during the Empire’s occupation. Bonus: the book is beautifully designed with a handful of illustrations and quotes before each chapter.

Girl Out of Water by Laura Silverman 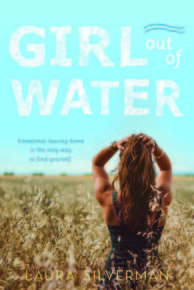 Pitch: Coming of age story for a girl content with her life on the beach

Story: “Anise Sawyer plans to spend every minute of summer with her friends: surfing, chowing down on fish tacos drizzled with wasabi balsamic vinegar, and throwing bonfires that blaze until dawn. But when a serious car wreck leaves her aunt, a single mother of three, with two broken legs, it forces Anise to say goodbye for the first time to Santa Cruz, the waves, her friends, and even a kindling romance, and fly with her dad to Nebraska for the entire summer. Living in Nebraska isn’t easy. Anise spends her days caring for her three younger cousins in the childhood home of her runaway mom, a wild figure who’s been flickering in and out of her life since birth, appearing for weeks at a time and then disappearing again for months, or even years, without a word.

Complicating matters is Lincoln, a one-armed, charismatic skater who pushes Anise to trade her surfboard for a skateboard. As Anise draws closer to Lincoln and takes on the full burden and joy of her cousins, she loses touch with her friends back home – leading her to one terrifying question: will she turn out just like her mom and spend her life leaving behind the ones she love.”

Quick take: A satisfying coming of age story even though L found it a bit predictable. The real strength of this book is Anise’s voice which is  very real, flowing and honest.

And We’re Off by Dana Schwartz 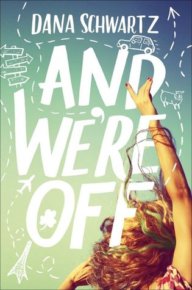 Pitch: Nora’s dream summer in Europe is crashed by her mother

Story: “Seventeen-year-old Nora Holmes is an artist, a painter from the moment she could hold a brush. She inherited the skill from her grandfather, Robert, who’s always nurtured Nora’s talent and encouraged her to follow her passion. Still, Nora is shocked and elated when Robert offers her a gift: an all-expenses-paid summer trip to Europe to immerse herself in the craft and to study history’s most famous artists. The only catch? Nora has to create an original piece of artwork at every stop and send it back to her grandfather. It’s a no-brainer: Nora is in!

Unfortunately, Nora’s mother, Alice, is less than thrilled about the trip. She worries about what the future holds for her young, idealistic daughter and her opinions haven’t gone unnoticed. Nora couldn’t feel more unsupported by her mother, and in the weeks leading up to the trip, the women are as disconnected as they’ve ever been. But seconds after saying goodbye to Alice at the airport terminal, Nora hears a voice call out: ‘Wait! Stop! I’m coming with you!'”

Quick take: And We’re Off is a quick and fun adventure. There are some terrific descriptions of so many places that you’ll think your passport will have some additional stamps. I have a pet peeve about really bratty teen characters and Nora gets close to the line. It’s a solid read, but I wish the rush ending packed a bit more punch. 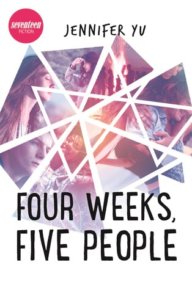 Story: “They’re more than their problems
Obsessive-compulsive teen Clarissa wants to get better, if only so her mother will stop asking her if she’s okay.
Andrew wants to overcome his eating disorder so he can get back to his band and their dreams of becoming famous.
Film aficionado Ben would rather live in the movies than in reality.
Gorgeous and overly confident Mason thinks everyone is an idiot.
And Stella just doesn’t want to be back for her second summer of wilderness therapy.

As the five teens get to know one another and work to overcome the various disorders that have affected their lives, they find themselves forming bonds they never thought they would, discovering new truths about themselves and actually looking forward to the future.”

Quick take: It’s great that the characters have a variety of conditions and there are chapters from many points of view. Unfortunately the premise and the plot fell flat for me.

The Black Witch by Laurie Forest 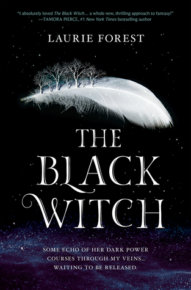 Pitch: Controversial fantasy about a sheltered witch who may have a grand destiny

Elloren Gardner is the granddaughter of the last prophesied Black Witch, Carnissa Gardner, who drove back the enemy forces and saved the Gardnerian people during the Realm War. But while she is the absolute spitting image of her famous grandmother, Elloren is utterly devoid of power in a society that prizes magical ability above all else.

When she is granted the opportunity to pursue her lifelong dream of becoming an apothecary, Elloren joins her brothers at the prestigious Verpax University to embrace a destiny of her own, free from the shadow of her grandmother’s legacy. But she soon realizes that the university, which admits all manner of people—including the fire-wielding, winged Icarals, the sworn enemies of all Gardnerians—is a treacherous place for the granddaughter of the Black Witch.

As evil looms on the horizon and the pressure to live up to her heritage builds, everything Elloren thought she knew will be challenged and torn away. Her best hope of survival may be among the most unlikely band of misfits…if only she can find the courage to trust those she’s been taught to hate and fear.”

Quick take: There’s been a lot of chatter about this book which distressed readers by its content and language. Elloran grows up privileged and sheltered in a fascist society so there are a lot of ugly and hurtful statements in the beginning of the book. Elloran is in for a big awakening when she heads off to magic university where she meets all the peoples she taught were evil. It takes a while, but she begins to understand that her upbringing was wrong and she begins to change.

The book is a redemption story, but the structure makes it difficult for marginalized and/or sensitive readers with over 300 pages of comments and actions that could be triggers for racism, sexism, racial purity, elitism, homophobia and more.  This difficult material is not a great match for YA/sensitive readers who may not be critically reading and putting the hateful comments in the context. This isn’t for everyone.

There was so much potential for an epic fantasy here (I did like parts of the book and some of the world building), but the fumble on the execution clearly makes this book difficult for many readers.

Thanks to Amulet (Noteworthy), Imprint (Traitor’s Kiss), Disney (Star Wars: Rebel Rising, Star Wars: Guardians of the Whills) Sourcebooks (Girl Out of Water) Penguin Teen (And We’re Off), Seventeen (Four weeks, Five People) and Harlequin Teen (The Black Witch) for providing the books for review. Want more details on my impression of these and other books? Check out my ratings and full reviews at Goodreads. 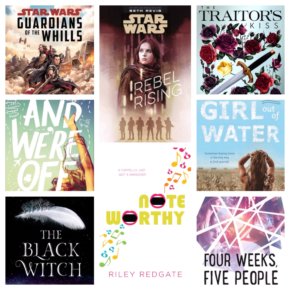