Is it summer yet? Well, it’s almost there since I’m off to YALLWest this weekend! I’ll be hanging with The Novel Strumpet and a couple thousand readers at the annual book fest in Santa Monica. I’ll report on all the fun shortly, but here’s my latest quick takes to give you some reading suggestions until then!

The Way You Make Me Feel by Maurene Goo 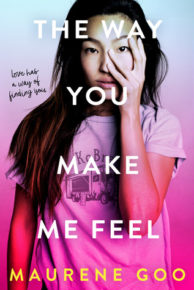 Pitch: With depth and humor, this is a breezy summer read

Story: “From the author of I Believe in a Thing Called Love, a laugh-out-loud story of love, new friendships, and one unique food truck.

Clara Shin lives for pranks and disruption. When she takes one joke too far, her dad sentences her to a summer working on his food truck, the KoBra, alongside her uptight classmate Rose Carver. Not the carefree summer Clara had imagined. But maybe Rose isn’t so bad. Maybe the boy named Hamlet (yes, Hamlet) crushing on her is pretty cute. Maybe Clara actually feels invested in her dad’s business. What if taking this summer seriously means that Clara has to leave her old self behind?

With Maurene Goo’s signature warmth and humor, The Way You Make Me Feel is a relatable story of falling in love and finding yourself in the places you’d never thought to look.”

Quick take: Clara may be a brash at first, but the summer changes her defenses and she becomes a happier version of herself. It sounds kind of heavy, but this book is a lot of fun with a few crazy twists along the way. This is also a love letter to LA and food. You’ll get hungry and wonder if kimchi and cheese can really taste good together. Read it, laugh and enjoy!

Bonus: There’s still to pre-order and submit your receipt for an enamel pin of the KoBra food truck and more goodies! Click here for more details! 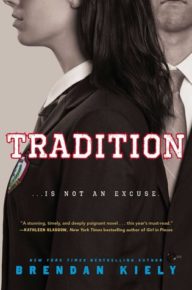 Story: “Prestigious. Powerful. Privileged. This is Fullbrook Academy, an elite prep school where history looms in the leafy branches over its brick walkways. But some traditions upheld in its hallowed halls are profoundly dangerous.

Jules Devereux just wants to keep her head down, avoid distractions, and get into the right college, so she can leave Fullbrook and its old-boy social codes behind. She wants freedom, but ex-boyfriends and ex-best friends are determined to keep her in place.

Jamie Baxter feels like an imposter at Fullbrook, but the hockey scholarship that got him in has given him a chance to escape his past and fulfill the dreams of his parents and coaches, whose mantra rings in his ears: Don’t disappoint us.

When Jamie and Jules meet, they recognize in each other a similar instinct for survival, but at a school where girls in the student handbook are rated by their looks, athletes stack hockey pucks in dorm room windows like notches on a bedpost, and school-sponsored dances push first year girls out into the night with senior boys, the stakes for safe sex, real love, and true friendship couldn’t be higher.

As Jules and Jamie’s lives intertwine, and the pressures to play by the rules and remain silent about the school’s secrets intensify, they see Fullbrook for what it really is. That tradition, a word Fullbrook hides behind, can be ugly, even violent. Ultimately, Jules and Jamie are faced with the difficult question: can they stand together against classmates—and an institution—who believe they can do no wrong?”

Quick take: Not only is this complex tale wonderfully written, but it also features the rare male POV from an ally. There’s a lot of insight into the pressures of toxic masculinity which needs more attention, especially among teens. It’s okay to be the big tough guy, it’s okay to cry, it’s okay to care about things. It’s an important book, a timely book and a great book.

It’s Your Universe by Ashley Eckstein 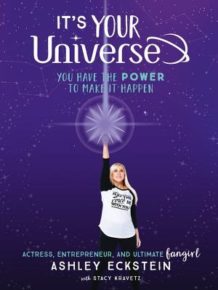 Pitch: Part biography, love letter to Disney and a roadmap for girl empowerment

Story: “Ashley Eckstein grew up inspired by all things Disney. She launched Her Universe, an apparel company catering to fan girls, which has become a preferred partner for Disney and their girl power initiative.

In It’s Your Universe, Ashley shares her own life lessons, as well as lessons from iconic Disney characters, as a way to inspire girls to create big dreams and work to make them a reality.

Ashley tells her story of being a little girl dreaming of being on a Disney stage, voicing the first female Jedi, Ahsoka Tano, and starting Her Universe, a blockbuster clothing line and community for fangirls.

With space for readers to make journal entries and quotes from iconic Disney characters, Ashley shows how princesses, Jedis, and super heroes were great role models for choosing her own path.”

Quick take: It’s empowering, honest and optimistic which is great inspiration for young teens everywhere. Bonus points for some of the cute illustrations and fun quotes throughout the book. 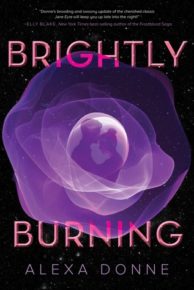 Story: “Seventeen-year-old Stella Ainsley wants just one thing: to go somewhere—anywhere—else. Her home is a floundering spaceship that offers few prospects, having been orbiting an ice-encased Earth for two hundred years. When a private ship hires her as a governess, Stella jumps at the chance. The captain of the Rochester, nineteen-year-old Hugo Fairfax, is notorious throughout the fleet for being a moody recluse and a drunk. But with Stella he’s kind.

But the Rochester harbors secrets: Stella is certain someone is trying to kill Hugo, and the more she discovers, the more questions she has about his role in a conspiracy threatening the fleet.”

Quick take: If you’re a Jane fan, you’ll enjoy this version which keeps true to the plot and updates some of the dated values. If you’re not a Jane fan, you may enjoy this fresh resetting. If you’ve never read Jane Eyre, this is a romance with a bit of spooky and a broody dude set in space.

The Smoke Thieves by Sally Green 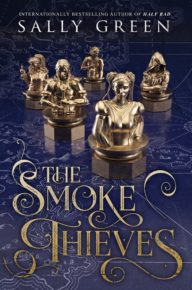 Story: “A princess, a traitor, a hunter and a thief. Four teenagers with the fate of the world in their hands. Four nations destined for conflict.

In Brigant, Princess Catherine prepares for a loveless political marriage arranged by her brutal and ambitious father. In Calidor, downtrodden servant March seeks revenge on the prince who betrayed his people. In Pitoria, feckless Edyon steals cheap baubles for cheaper thrills as he drifts from town to town. And in the barren northern territories, thirteen-year-old Tash is running for her life as she plays bait for the gruff demon hunter Gravell.

As alliances shift and shatter, and old certainties are overturned, our four heroes find their past lives transformed and their futures inextricably linked by the unpredictable tides of magic and war. Who will rise and who will fall? And who will claim the ultimate prize?”

Quick take: It’s a popcorn book where the focus is on the action. The book follows five characters as they slowly and inevitably intersect. Stories like this rely on having great individual characters until they weave together and I’ll have more on these characters tomorrow since Book Beat will host the next stop on the blog tour!

Thanks to Macmillan (The Way You Make Me Feel), Simon & Schuster (Tradition), Disney (It’s Your Universe), HMH (Brightly Burning) and Penguin (The Smoke Thieves) for providing the books for review. Want more details on my impression of these and other books? Check out my ratings and full reviews at Goodreads. 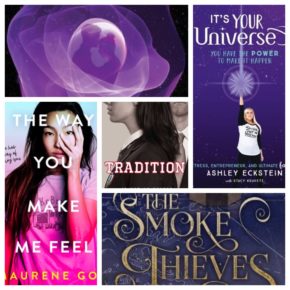