After all the fun of YALLWest and a happy book haul, I’m here to talk up a batch of fabulous new reads! It’s a rare round-up where I would recommend every single book so dig into the start of a fierce and epic fantasy series, a return to the magical and wildly imaginative world of Caraval and a pair of romances, each adorable in their own way. 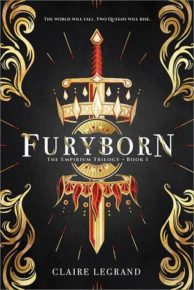 Story: “Furyborn follows two fiercely independent young women, centuries apart, who hold the power to save their world…or doom it.

When assassins ambush her best friend, the crown prince, Rielle Dardenne risks everything to save him, exposing her ability to perform all seven kinds of elemental magic. The only people who should possess this extraordinary power are a pair of prophesied queens: a queen of light and salvation and a queen of blood and destruction. To prove she is the Sun Queen, Rielle must endure seven trials to test her magic. If she fails, she will be executed…unless the trials kill her first.

A thousand years later, the legend of Queen Rielle is a mere fairy tale to bounty hunter Eliana Ferracora. When the Undying Empire conquered her kingdom, she embraced violence to keep her family alive. Now, she believes herself untouchable–until her mother vanishes without a trace, along with countless other women in their city. To find her, Eliana joins a rebel captain on a dangerous mission and discovers that the evil at the heart of the empire is more terrible than she ever imagined.

As Rielle and Eliana fight in a cosmic war that spans millennia, their stories intersect, and the shocking connections between them ultimately determine the fate of their world–and of each other.”

Quick take: Wow! A thrilling page-turner about two young women, both on a journey to figure out who they are while half the kingdom is trying to kill them. There have been a lot of books about evil queens and, to date, they have had a similar formula. Furyborn is refreshing with a different approach. This one is really tough to put down since everything just clicks in this book. Don’t miss this one!

Bonus: Pre-order a copy and submit your proof of purchase here for some extra goodies. If you pre-order through Books of Wonder, you get a signed book with a tote bag.

From Twinkle, With Love by Sandhya Menon 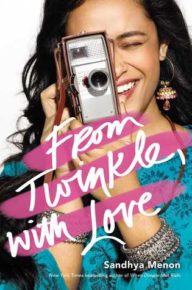 Pitch: A funny and sweet rom-com from the author of When Dimple Met Rishi

Story: “Aspiring filmmaker and wallflower Twinkle Mehra has stories she wants to tell and universes she wants to explore, if only the world would listen. So when fellow film geek Sahil Roy approaches her to direct a movie for the upcoming Summer Festival, Twinkle is all over it. The chance to publicly showcase her voice as a director? Dream come true. The fact that it gets her closer to her longtime crush, Neil Roy—a.k.a. Sahil’s twin brother? Dream come true x 2.

When mystery man ‘N’ begins emailing her, Twinkle is sure it’s Neil, finally ready to begin their happily-ever-after. The only slightly inconvenient problem is that, in the course of movie-making, she’s fallen madly in love with the irresistibly adorkable Sahil.

Twinkle soon realizes that resistance is futile: The romance she’s got is not the one she’s scripted. But will it be enough?

Told through the letters Twinkle writes to her favorite female filmmakers, From Twinkle, with Love navigates big truths about friendship, family, and the unexpected places love can find you.”

Quick take: With trademark humor, this story is about friendships, a mysterious secret admirer and figuring out what the “right boy” means. Twinkle is a filmmaker who can’t always see what’s in front of her. She’s funny and so easily relatable.

Bonus: The author is offering up some fun art cards and signed bookplates if you submit pre-order proof at this link. 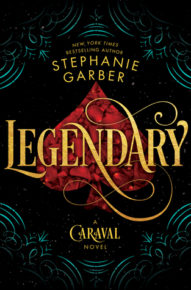 Pitch: The magical follow-up to Caraval

A heart to protect. A debt to repay. A game to win.

After being swept up in the magical world of Caraval, Donatella Dragna has finally escaped her father and saved her sister Scarlett from a disastrous arranged marriage. The girls should be celebrating, but Tella isn’t yet free. She made a desperate bargain with a mysterious criminal, and what Tella owes him no one has ever been able to deliver: Caraval Master Legend’s true name.

The only chance of uncovering Legend’s identity is to win Caraval, so Tella throws herself into the legendary competition once more—and into the path of the murderous heir to the throne, a doomed love story, and a web of secrets…including her sister’s. Caraval has always demanded bravery, cunning, and sacrifice. But now the game is asking for more. If Tella can’t fulfill her bargain and deliver Legend’s name, she’ll lose everything she cares about—maybe even her life. But if she wins, Legend and Caraval will be destroyed forever.

Welcome, welcome to Caraval…the games have only just begun.”

Quick takes: I have to admit that I didn’t love Tella and Dante in Caraval, but this book changed my mind. Legendary goes deeper into the magic and builds a whole new mythology. It’s magical and lovely. This book sets up the upcoming third book in the series where, hopefully, some loose ends will be resolved and the bigger picture will become clear.

Bonus: Submit your pre-order receipt here for a set of custom playing cards.

Listen to Your Heart by Kasie West 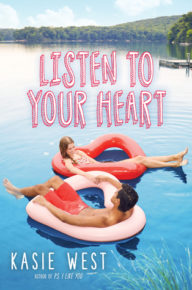 Story: “Talking to other people isn’t Kate Bailey’s favorite activity. She’d much rather be out on the lake, soaking up the solitude and sunshine. So when her best friend, Alana, convinces Kate to join their high school’s podcast, Kate is not expecting to be chosen as the host. Now she’ll have to answer calls and give advice on the air? Impossible.

But to Kate’s surprise, she turns out to be pretty good at the hosting gig. Then the podcast gets in a call from an anonymous guy, asking for advice about his unnamed crush. Kate is pretty sure that the caller is gorgeous Diego Martinez, and even surer that the girl in question is Alana. Kate is excited for her friend … until Kate herself starts to develop feelings for Diego. Suddenly, Kate finds that while doling out wisdom to others may be easy, asking for help is tougher than it looks, and following your own advice is even harder.

Kasie West’s adorable story of secrets, love, and friendship is sure to win over hearts everywhere.”

Quick take: This is more of a slow burn since crushing on your BFF’s crush isn’t exactly in Kate’s plans. With trademark emotions, this is another winning romance from Kasie West.

Thanks to Sourcebooks (Furyborn), Simon & Schuster (From Twinkle, with Love), Macmillan (Legendary) and Scholastic (Listen to Your Heart) for providing the books for review. Want more details on my impression of these and other books? Check out my ratings and full reviews at Goodreads. 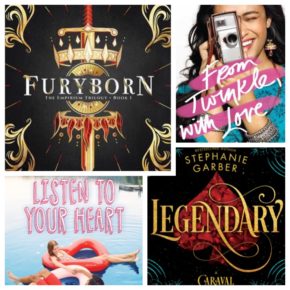