Reviews in a heartbeat!

The big news this month is Cassandra Clare’s latest Shadowhunter book, but we also have the excellent The Serpent King, a wide range of historic fiction and lots of short stories to warm you up for some upcoming books!

The Serpent King by Jeff Zentner 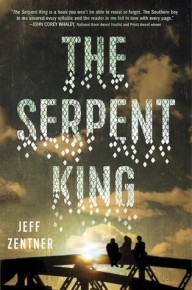 Pitch: a modern-day Stand By Me

Story: “Dill has had to wrestle with vipers his whole life—at home, as the only son of a Pentecostal minister who urges him to handle poisonous rattlesnakes, and at school, where he faces down bullies who target him for his father’s extreme faith and very public fall from grace.

He and his fellow outcast friends must try to make it through their senior year of high school without letting the small-town culture destroy their creative spirits and sense of self. Graduation will lead to new beginnings for Lydia, whose edgy fashion blog is her ticket out of their rural Tennessee town. And Travis is content where he is thanks to his obsession with an epic book series and the fangirl turning his reality into real-life fantasy.

Their diverging paths could mean the end of their friendship. But not before Dill confronts his dark legacy to attempt to find a way into the light of a future worth living”

Quick take: Read this book! While a Bible Belt setting with holy snakes really didn’t sound like a book for everyone, you’d be wrong. This is a tale about friendship and making your own destiny. It’s an emotional roller coaster and a terrific read.

Available: March 8. There’s a pre-order gift so you have a week to get on that! (Click here and scroll down for details) 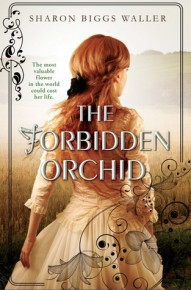 Pitch: A brisk and epic journey for historic fiction fans

Story: “Staid, responsible Elodie Buchanan is the eldest of ten sisters living in a small English market town in 1861. The girls’ father is a plant hunter, usually off adventuring through the jungles of China.

Then disaster strikes: Mr. Buchanan fails to collect an extremely rare and valuable orchid, meaning that he will be thrown into debtors’ prison and the girls will be sent to the orphanage or the poorhouse. Elodie’s father has one last chance to return to China, find the orchid, and save the family—and this time, thanks to an unforeseen twist of fate, Elodie is going with him. Elodie has never before left her village, but what starts as fear turns to wonder as she adapts to seafaring life aboard the tea clipper The Osprey, and later to the new sights, dangers, and romance of China.

But even if she can find the orchid, how can she find herself now that staid, responsible Elodie has seen how much the world has to offer?”

Quick take: There’s a little bit of everything in this book! Historical fiction, seafaring adventure, travelogue through China, coming of age, feminism in Victorian England and a bit of romance. If you’re looking for historical fiction that feels true to the period, this is a great adventure and a real page-turner.

Into the Dim by Janet B. Taylor 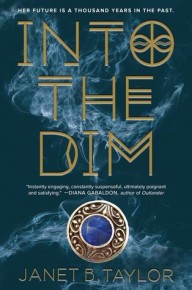 Pitch: Historic fiction, time travel and even a little bit of Scotland and kilts

Story: “When fragile, sixteen-year-old Hope Walton loses her mom to an earthquake overseas, her secluded world crumbles. Agreeing to spend the summer in Scotland, Hope discovers that her mother was more than a brilliant academic, but also a member of a secret society of time travelers. Trapped in the twelfth century in the age of Eleanor of Aquitaine, Hope has seventy-two hours to rescue her mother and get back to their own time. Along the way, her path collides with that of a mysterious boy who could be vital to her mission . . . or the key to Hope’s undoing.

Addictive, romantic, and rich with historical detail, Into the Dim is an Outlander for teens.”

Quick take: Is this really “Outlander for Teens”? The story includes time travel, Scotland and hot men in kilts and it even has the endorsement of Herself,  but don’t expect a YA Outlander.  Into the Dim is clearly setting up a new series with a different story and some great historic details. This book is focused and there are lots of untold stories, namely Hope’s background. Overall, it’s enjoyable way to pass the last weeks of Droutlander, even if a plot point or two seems a bit stretched.

Flight of Dreams by Ariel Lawhon 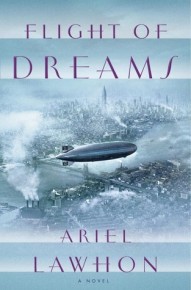 Pitch: A fictional theory on why the Hindenburg went up in flames (Adult Fiction)

Story: “Flight of Dreams is a fiercely intimate portrait of the real people on board the last flight of the Hindenburg. Behind them is the gathering storm in Europe and before them is looming disaster. But for the moment they float over the Atlantic, unaware of the inexorable, tragic fate that awaits them.

Brilliantly exploring one of the most enduring mysteries of the twentieth century, Flight of Dreams is that rare novel with spellbinding plotting that keeps you guessing till the last page and breathtaking emotional intensity that stays with you long after.”

Quick take: It takes a little while to plug into the story as there are dozens of characters to meet and they all get POV chapters. But after the first day of the voyage, the story picks up as the characters start to meet and the story builds to the inevitable, tragic ending. Yes, we all know what happens to the Hindenburg, but the story’s heartbreaking climax is well done. Plus there’s a fascinating look at air travel back in 1937 and the first seeds of Hitler and Nazi Germany (a very small part of the story, really). 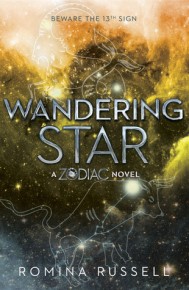 Story: “Orphaned, disgraced, and stripped of her title, Rho is ready to live life quietly, as an aid worker in the Cancrian refugee camp on House Capricorn. But news has spread that the Marad–an unbalanced terrorist group determined to overturn harmony in the Galaxy–could strike any House at any moment. Then, unwelcome nightmare that he is, Ochus appears to Rho, bearing a cryptic message that leaves her with no choice but to fight.

Now Rho must embark on a high-stakes journey through an all-new set of Houses, where she discovers that there’s much more to her Galaxy–and to herself–than she could have ever imagined.”

Quick take: Romina Russell has a wild and detailed imagination so the world of the Zodiac books is original, lush and oh-so-creative. Like Zodiac, Wandering Star is a zippy adventure with the plot constantly twisting and turning I wish Rho could stop wallowing in guilt and move on from the love triangle a little faster. Still, it’s an adventure and there’s a lot of story left for the final book, Black Moon, so I look forward to reading that!

Thanks to HMH for Young readers, Penguin Young Readers and NetGalley for providing the books for review. Want more details on my impression of these and other books? Check out my ratings and full reviews at Goodreads.

Now here are some other books I’m looking forward to, but haven’t had a chance to read yet! 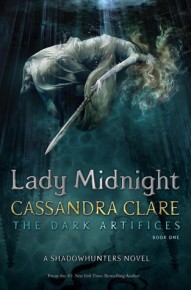 Story: “The Shadowhunters of Los Angeles star in the first novel in Cassandra Clare’s newest series, The Dark Artifices, a sequel to the internationally bestselling Mortal Instruments series. Lady Midnight is a Shadowhunters novel.

It’s been five years since the events of City of Heavenly Fire that brought the Shadowhunters to the brink of oblivion. Emma Carstairs is no longer a child in mourning, but a young woman bent on discovering what killed her parents and avenging her losses.

Together with her parabatai Julian Blackthorn, Emma must learn to trust her head and her heart as she investigates a demonic plot that stretches across Los Angeles, from the Sunset Strip to the enchanted sea that pounds the beaches of Santa Monica. If only her heart didn’t lead her in treacherous directions…

Making things even more complicated, Julian’s brother Mark—who was captured by the faeries five years ago—has been returned as a bargaining chip. The faeries are desperate to find out who is murdering their kind—and they need the Shadowhunters’ help to do it. But time works differently in faerie, so Mark has barely aged and doesn’t recognize his family. Can he ever truly return to them? Will the faeries really allow it?”

Buzz: If you’re already a fan of these books, I don’t need to convince you to buy it. If you’re new to Cassandra Clare, then be prepared for a learning curve as quite a few characters have already been introduced in previous books. If you’re interested in getting a signed book, Cassandra is headed on tour and signed books are available at Books of Wonder.

There are lots of other interesting releases in the next two weeks, so if you’re looking for something more check out: 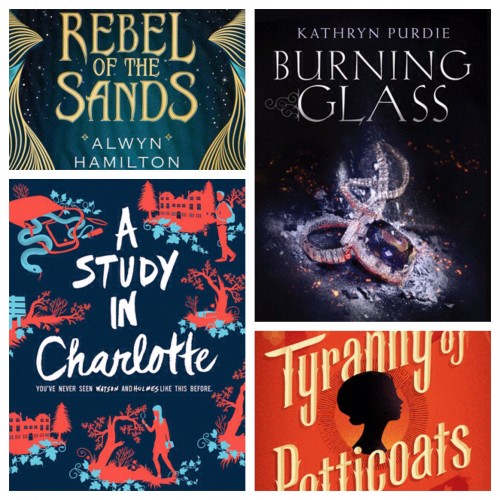 Kathryn Purdie and Brittany Cavallaro are two of the authors speaking and signing at C2E2 next month in Chicago. There’s quite a few authors coming to c2E2 next month so check out the schedule highlights!

By coincidence, three well-regarded book series are releasing short stories in the next week. These stories are little appetizers to hold readers over until the second books complete the series. Most of these stories will make more sense if you read the first book in the series, but this is a way to sample the author and the book’s setting to see if you want to read more. (Trust me, you will!) 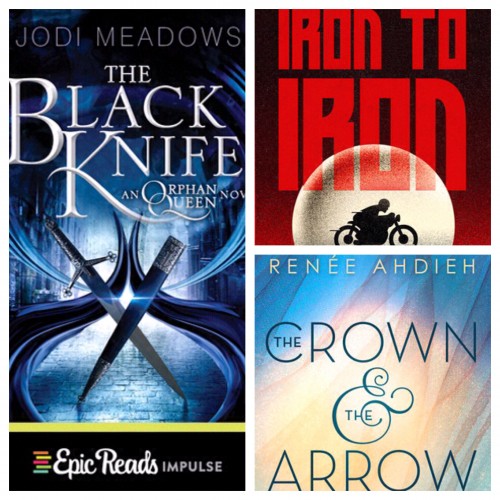 Lots of good stuff this month and more on the way!