November 6 is going to be a day that will drain your wallet! There are lots of new releases so take a peek at what I have below and keep your eye out for The Empress of All Seasons by Emiko Jean, Girls of Paper and Fire by Natasha Ngan and Archenemies by Marisa Meyer, too! 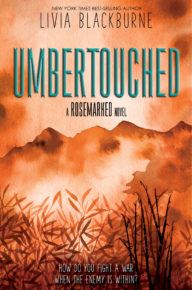 Pitch: Satisfying conclusion with more action and twists than  Rosemarked, one of my favorites books of last year

Story: The mission was a failure. Even though Zivah and Dineas discovered a secret that could bring down the empire, their information is useless without proof. Now, with their cover blown and their quest abandoned, their only remaining hope is to get home before Ampara brings the full might of its armies against their peoples.

Together, healer and warrior must find the courage to save their people, expose the truth, and face the devastating consequences headed their way

Quick take: I loved Rosemarked for its fascinating exploration of contradictions: What happens when a healer can’t heal and spreads disease? What happens when a double agent is caught between his identities? There was a lot of set up before the main story got going.

In Umbertouched, the focus is more on plot which gives Zivah and Dineas separate adventures. Their individual plot lines are twisted and filled with surprises with a satisfying ending. I enjoyed this book even if it’s not quite as ambitious or as original as the first one. 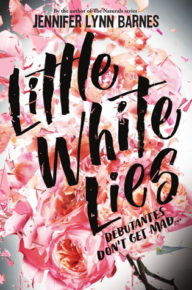 Story: Eighteen-year-old auto mechanic Sawyer Taft did not expect her estranged grandmother to show up at her apartment door and offer her a six-figure contract to participate in debutante season. And she definitely never imagined she would accept. But when she realizes that immersing herself in her grandmother’s “society” might mean discovering the answer to the biggest mystery of her life-her father’s identity-she signs on the dotted line and braces herself for a year of makeovers, big dresses, bigger egos, and a whole lot of bless your heart. The one thing she doesn’t expect to find is friendship, but as she’s drawn into a group of debutantes with scandalous, dangerous secrets of their own, Sawyer quickly discovers that her family isn’t the only mainstay of high society with skeletons in their closet. There are people in her grandmother’s glittering world who are not what they appear, and no one wants Sawyer poking her nose into the past. As she navigates the twisted relationships between her new friends and their powerful parents, Sawyer’s search for the truth about her own origins is just the beginning.

Set in the world of debutante balls, grand estates and rolling green hills, Little White Lies combines a charming setting, a classic fish-out-of-water story, and the sort of layered mystery only author Jennifer Lynn Barnes can pull off.

Quick take: Fun and twisty page-turner about a girl suddenly sucked into the viper pit of debutant season. There’s lots of fun with Sawyer’s snarky look at high society, but there’s a lot of heart as she tries to figure out this family she’s meeting for the first time. Add in some colorful characters and lots of layers to the mystery, it’s a slick, escapist binge read.

Kingdom of the Blazing Phoenix by Julie Dao 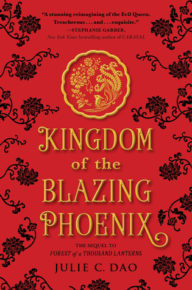 Pitch: The conclusion to Forest of a Thousand Lanterns, an Asian-inspired re-telling of Snow White

Story: This fairy tale retelling lives in a mystical world inspired by the Far East, where the Dragon Lord and the Serpent God battle for control of the earthly realm; it is here that the flawed heroine of Forest of a Thousand Lanterns finally meets her match. An epic fantasy finale to the Rise of the Empress novels.

Princess Jade has grown up in exile, hidden away in a monastery while her stepmother, the ruthless Xifeng, rules as empress of Feng Lu. But the empire is in distress and its people are sinking into poverty and despair. Even though Jade doesn’t want the crown, she knows she is the only one who can dethrone the empress and set the world right. Ready to reclaim her place as rightful heir, Jade embarks on a quest to raise the Dragon Lords and defeat Xifeng and the Serpent God once and for all. But will the same darkness that took Xifeng take Jade, too? Or will she find the strength within to save herself, her friends, and her empire?

Quick take: This companion book to Forest of a Thousand Lanterns continues this Asian-inspired fantasy retelling with a focus now on Snow White’s side of the story. If you liked the first book, then you’ll also enjoy this one which is a bit stronger with similar strengths and weaknesses. There’s lots of terrific imagery and some very clever twists on the original Snow White fairy tale, but I wish this book took more time to develop the emotional arcs.Still, lots to admire here so if you’re looking for an original twist on Snow White, try this series

Thanks to Disney Hyperion (Umbertouched, Little White Lies) and Penguin (Kingdom of the Blazing Phoenix) for providing the books for review. Want more details on my impression of these and other books? Check out my books at Good Reads for more details. 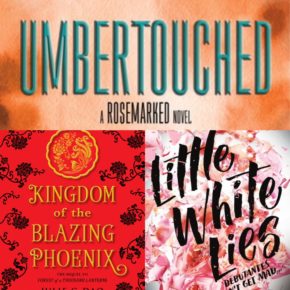