The game is afoot! Strangely enough, this edition of Book Beat is a study in Charlotte Holmes from two very different takes. Both books will satisfy Sherlockians, but in very different ways A Study in Charlotte is a modern day tribute and A Study of Scarlet Women is a feminist re-imagining. I’ve also got a quick take on the new Iron Man novel and a few dark tales.

A Study in Charlotte by Brittany Cavallaro 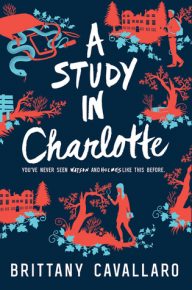 Pitch: A loving tribute to Sherlock Holmes where the teenage descendants of Holmes and Watson meet at boarding school and get framed for murder

Story: “The last thing Jamie Watson wants is a rugby scholarship to Sherringford, a Connecticut prep school just an hour away from his estranged father. But that’s not the only complication: Sherringford is also home to Charlotte Holmes, the famous detective’s great-great-great-granddaughter, who has inherited not only Sherlock’s genius but also his volatile temperament. From everything Jamie has heard about Charlotte, it seems safer to admire her from afar.

From the moment they meet, there’s a tense energy between them, and they seem more destined to be rivals than anything else. But when a Sherringford student dies under suspicious circumstances, ripped straight from the most terrifying of the Sherlock Holmes stories, Jamie can no longer afford to keep his distance. Jamie and Charlotte are being framed for murder, and only Charlotte can clear their names. But danger is mounting and nowhere is safe—and the only people they can trust are each other.”

Quick take: It’s a very modern take on Holmes and Watson, but very true to the spirit of Sir Arthur Conan Doyle with all of the characters’ ticks lovingly on display. There’s also clever nods to Mrs. Hudson, Mycroft and the whole gang. It’s a pleasure to see them all without feeling derivative in this modern setting. It’s all fresh and fun and also the first in a trilogy.

A Study in Scarlet Women by Sherry Thomas 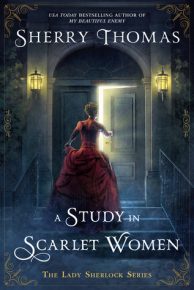 Pitch: Sherlock Holmes is an alias for an independent-minded woman in Victorian England

Story: “With her inquisitive mind, Charlotte Holmes has never felt comfortable with the demureness expected of the fairer sex in upper class society.  But even she never thought that she would become a social pariah, an outcast fending for herself on the mean streets of London.

When the city is struck by a trio of unexpected deaths and suspicion falls on her sister and her father, Charlotte is desperate to find the true culprits and clear the family name. She’ll have help from friends new and old—a kind-hearted widow, a police inspector, and a man who has long loved her. But in the end, it will be up to Charlotte, under the assumed name Sherlock Holmes, to challenge society’s expectations and match wits against an unseen mastermind.”

Quick take: While there are nods to Sir Arthur Conan Doyle’s Sherlock, this is more about women finding a way to make a respectable living when options were severely limited. Sherlock and Watson are tools to deliver this story, but it’s not necessarily a tribute to the original. Still there are fun moments and a very twisty case that provide for lots of entertainment. It’s a good start to a new mystery series. 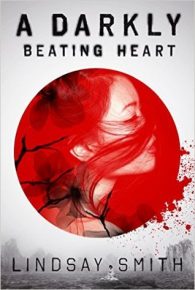 Pitch: A dark story about two different girls, united by their anger

Story: “A time-travel story that alternates between modern day and 19th century Japan as one girl confronts the darkness lurking in her soul.

No one knows what to do with Reiko. She is full of hatred. All she can think about is how to best hurt herself and the people closest to her. After a failed suicide attempt, Reiko’s parents send her from their Seattle home to spend the summer with family in Japan to learn to control her emotions. But while visiting Kuramagi, a historic village preserved to reflect the nineteenth-century Edo period, Reiko finds herself slipping back in time into the life of Miyu, a young woman even more bent on revenge than Reiko herself. Reiko loves being Miyu, until she discovers the secret of Kuramagi village, and must face down Miyu’s demons as well as her own.”

Quick take: The details of modern and historic Japan are lovingly fleshed out in this intriguing story with its own unique flavor. This is a tale about revenge and anger, so it’s a tough read due to the dark head space, ergo this may not be for everyone. 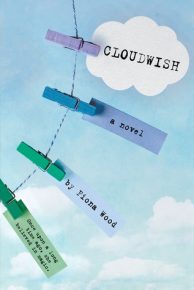 Pitch: A tale of first love wrapped in a story of being an outsider and finding a place where you fit

Story: “For Vân Uoc, fantasies fall into two categories: nourishing or pointless. Daydreaming about attending her own art opening? Nourishing. Daydreaming about Billy Gardiner, star of the rowing team who doesn’t even know she’s alive? Pointless.

So Vân Uoc tries to stick to her reality–keeping a low profile as a scholarship student at her prestigious Melbourne private school, managing her mother’s PTSD from a traumatic emigration from Vietnam, and admiring Billy from afar. Until she makes a wish that inexplicably–possibly magically–comes true. Billy actually notices her. In fact, he seems to genuinely like her. But as they try to fit each other into their very different lives, Vân Uoc can’t help but wonder why Billy has suddenly fallen for her. Is it the magic of first love, or is it magic from a well-timed wish that will eventually, inevitably, come to an end?”

Quick take: Vân Uoc’s insecurities kick off the book so right away we know this isn’t a just a sweet and fluffy romance. As a scholarship student, a Vietnamese-Australian, and a person in a different income bracket, Vân Úóc is an outsider thus Cloudwish tackles some really tough issues, but in an honest way. Extra points for featuring such diversity in many ways — ethnicity, income and LGBTQ. 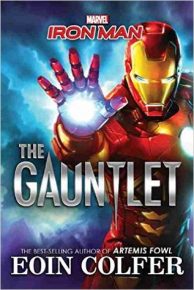 Story: “Tony Stark is known throughout the world as many things: billionaire, inventor, Avenger. But mainly for being the Invincible Iron Man.

Just when Tony is about to add his pizzazz to an international eco-summit in Ireland, someone close to him forces him to question his role in making the world a more dangerous place with his high-tech weaponry. But Stark doesn’t have much time to reflect before an old enemy presents him with an even greater challenge: the assassination of all the eco-ministers, and Iron Man himself. Just how invincible Iron Man is when he is stripped of everything remains to be seen in this breathless adventure by the bestselling author of Artemis Fowl.”

Quick take: If you’re looking for a deep character study about Iron Man, this isn’t the book. That’s not to say that there isn’t any character development, but the main focus is on Tony’s quips, his toys and a simple mission gone very, very wrong. There’s lots of fun new tech and new suits, but the star of the book is the fun snarkiness in the writing and also in Tony’s dialogue. 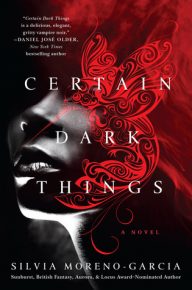 Pitch: Dystopian vampire story with a twist of Mexican folklore

Story: “Welcome to Mexico City… An Oasis In A Sea Of Vampires…

Domingo, a lonely garbage-collecting street kid, is busy eking out a living when a jaded vampire on the run swoops into his life

Atl, the descendant of Aztec blood drinkers, must feast on the young to survive and Domingo looks especially tasty. Smart, beautiful, and dangerous, Atl needs to escape to South America, far from the rival narco-vampire clan pursuing her. Domingo is smitten.

Her plan doesn’t include developing any real attachment to Domingo. Hell, the only living creature she loves is her trusty Doberman. Little by little, Atl finds herself warming up to the scrappy young man and his effervescent charm.

And then there’s Ana, a cop who suddenly finds herself following a trail of corpses and winds up smack in the middle of vampire gang rivalries.

Vampires, humans, cops, and gangsters collide in the dark streets of Mexico City. Do Atl and Domingo even stand a chance of making it out alive?”

Quick take: If you’re looking for a different take on vampires thrillers, then this is a good option. The best part of this book is the very textured world with layers of Mexican folklore and legends. Something about the writing kept me at a distance from the characters and I found myself skimming some parts. Read this one if you want a unique vampire world.

Thanks to Macmillan (Cloudwish, A Darkly Beating Heart), Berkeley (A Study in Scarlet Women), Disney (Iron Man: The Gauntlet) and Thomas Dunne Books (Certain Dark Things) for providing the books for review. Want more details on my impression of these and other books? Check out my ratings and full reviews at Goodreads.