This book beat has a wide range of books from A Line in the Dark (hypnotic psychological thriller) to Dear Martin (all-too relevant story about race relations) or, if that’s too much deep headspace, then how about The Empress (big space adventure)?

A Line in the Dark by Malinda Lo 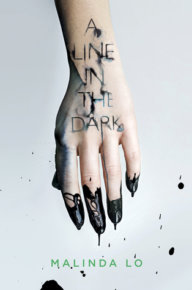 Story: “The line between best friend and something more is a line always crossed in the dark.

Jess Wong is Angie Redmond’s best friend. And that’s the most important thing, even if Angie can’t see how Jess truly feels. Being the girl no one quite notices is OK with Jess anyway. While nobody notices her, she’s free to watch everyone else. But when Angie begins to fall for Margot Adams, a girl from the nearby boarding school, Jess can see it coming a mile away. Suddenly her powers of observation are more curse than gift.

As Angie drags Jess further into Margot’s circle, Jess discovers more than her friend’s growing crush. Secrets and cruelty lie just beneath the carefree surface of this world of wealth and privilege, and when they come out, Jess knows Angie won’t be able to handle the consequences.

When the inevitable darkness finally descends, Angie will need her best friend.

A Line in the Dark is a story of love, loyalty, and murder.”

Quick take: I’m not a big thriller reader, but I fell into this psychological thriller. It features awful people and awful moments, but it’s compelling anyway. It’s brisk, diverse and creepy (in a good way). Perfect reading for the crisp fall weather. 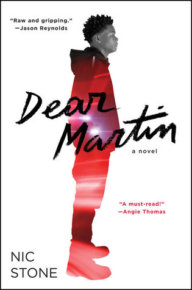 Justyce McAllister is top of his class and set for the Ivy League—but none of that matters to the police officer who just put him in handcuffs. And despite leaving his rough neighborhood behind, he can’t escape the scorn of his former peers or the ridicule of his new classmates.

Justyce looks to the teachings of Dr. Martin Luther King Jr. for answers. But do they hold up anymore? He starts a journal to Dr. King to find out.

Then comes the day Justyce goes driving with his best friend, Manny, windows rolled down, music turned up—way up, sparking the fury of a white off-duty cop beside them. Words fly. Shots are fired. Justyce and Manny are caught in the crosshairs. In the media fallout, it’s Justyce who is under attack.”

Quick take: A book where you just sink into the main character’s voice and story. The reader gets an interesting dialogue on different takes on race relations and various arguments. Sometimes the importance and passion of the discussion gets a little heavy-handed and takes away from the narrative movement, but it’s a great book and the discussion is worth reading.

The Empress by S.J. Kincaid 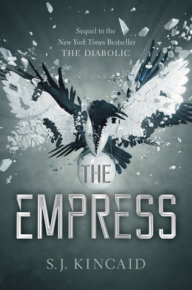 Pitch: The sequel to the excellent The Diabolic

Story: “It’s a new day in the Empire. Tyrus has ascended to the throne with Nemesis by his side and now they can find a new way forward—one where they don’t have to hide or scheme or kill. One where creatures like Nemesis will be given worth and recognition, where science and information can be shared with everyone and not just the elite.

But having power isn’t the same thing as keeping it, and change isn’t always welcome. The ruling class, the Grandiloquy, has held control over planets and systems for centuries—and they are plotting to stop this teenage Emperor and Nemesis, who is considered nothing more than a creature and certainly not worthy of being Empress.

Nemesis will protect Tyrus at any cost. He is the love of her life, and they are partners in this new beginning. But she cannot protect him by being the killing machine she once was. She will have to prove the humanity that she’s found inside herself to the whole Empire—or she and Tyrus may lose more than just the throne. But if proving her humanity means that she and Tyrus must do inhuman things, is the fight worth the cost of winning it?”

Quick take: The Diabolic was one of my favorites last year with a great story and a deeper look at what it means to be human. I enjoyed The Empress, but it’s a different animal since Nemesis’ humanity is established. I miss that bigger question about humanity (though it’s here in a different way), but it’s fun to dive deeper into this world for another ride.

Beasts Made of Night by Tochi Onyebuchi 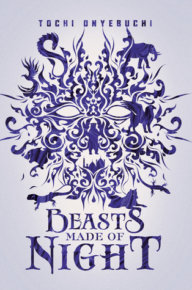 Story: “In the walled city of Kos, corrupt mages can magically call forth sin from a sinner in the form of sin-beasts – lethal creatures spawned from feelings of guilt.

Taj is the most talented of the aki, young sin-eaters indentured by the mages to slay the sin-beasts. But Taj’s livelihood comes at a terrible cost. When he kills a sin-beast, a tattoo of the beast appears on his skin while the guilt of committing the sin appears on his mind. Most aki are driven mad by the process, but 17-year-old Taj is cocky and desperate to provide for his family.

When Taj is called to eat a sin of a royal, he’s suddenly thrust into the center of a dark conspiracy to destroy Kos. Now Taj must fight to save the princess that he loves – and his own life.

Quick take: This started off very promising with a vivid and unique world and brisk pacing. The second half focuses more on some crazy plot twists than characters so it started to loose me then, but this has some great imagery and an original voice.

The Midnight Dance by Nikki Katz 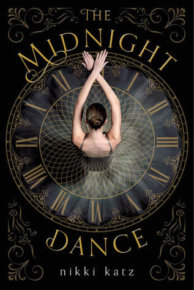 Pitch: Phantom of the Opera meets Frankenstein at the ballet (not literally)

Story: “When the music stops, the dance begins.

Seventeen-year-old Penny is a lead dancer at the Grande Teatro, a finishing school where she and eleven other young women are training to become the finest ballerinas in Italy. Tucked deep into the woods, the school is overseen by the mysterious and handsome young Master who keeps the girls ensconced in the estate – and in the only life Penny has never known.

But when flashes of memories, memories of a life very different from the one she thinks she’s been leading, start to appear, Penny begins to question the Grand Teatro and the motivations of the Master. With a kind and attractive kitchen boy, Cricket, at her side, Penny vows to escape the confines of her school and the strict rules that dictate every step she takes. But at every turn, the Master finds a way to stop her, and Penny must find a way to escape the school and uncover the secrets of her past before it’s too late.”

Quick take: A great cover and a nice gothic setting. Others may like the atmosphere more, but this book is melodramatic and way too cheesy for me.

Thanks to Penguin Teen (A Line in the Dark, Beasts Made of Night), Crown Publishing (Dear Martin), Simon & Schuster (The Empress) and Swoon Reads (The Midnight Dance) for providing the books for review. Want more details on my impression of these and other books? Check out my ratings and full reviews at Goodreads. 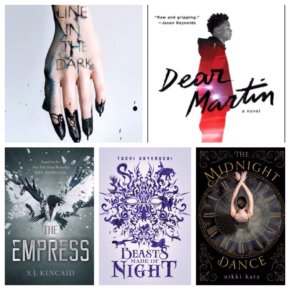