This group of books is all about fierce females! Every story features a girl who is about to change her world or the whole world, in some cases.

If you have a fear of open water, then maybe avoid The Wicked Deep and To Kill a Kingdom both of which feature ladies who like to kill by drowning. Fantasy readers shouldn’t miss Children of Blood and Bone or the exciting conclusion to the Rebel of the Sands series, Hero at the Fall!

Children of Blood and Bone by Tomi Adeyemi 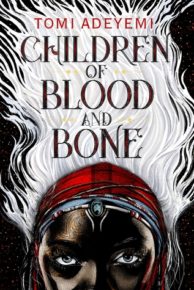 But everything changed the night magic disappeared. Under the orders of a ruthless king, maji were targeted and killed, leaving Zélie without a mother and her people without hope.

Now, Zélie has one chance to bring back magic and strike against the monarchy. With the help of a rogue princess, Zélie must outwit and outrun the crown prince, who is hell-bent on eradicating magic for good.

Danger lurks in Orïsha, where snow leoponaires prowl and vengeful spirits wait in the waters. Yet the greatest danger may be Zélie herself as she struggles to control her powers—and her growing feelings for the enemy.”

Quick take: The world-building is deep and original. The characters are a mix of good, bad and ugly. The plot is original and twisty. Really this book has it all and is an amazing debut. It lives up to its hype so don’t miss this one!

Bonus thought: If reading 600 pages is daunting, try the audiobook. The narrator, Bahni Turpin, vividly brings the story to life.

Hero at the Fall by Alwyn Hamilton 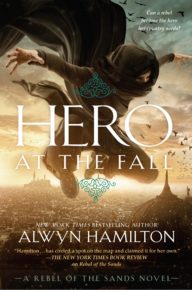 Pitch: A satisfying conclusion to this terrific fantasy series about a girl, the desert and a revolution

Story: “When gunslinging Amani Al’Hiza escaped her dead-end town, she never imagined she’d join a revolution, let alone lead one. But after the bloodthirsty Sultan of Miraji imprisoned the Rebel Prince Ahmed in the mythical city of Eremot, she doesn’t have a choice. Armed with only her revolver, her wits, and her untameable Demdji powers, Amani must rally her skeleton crew of rebels for a rescue mission through the unforgiving desert to a place that, according to maps, doesn’t exist. As she watches those she loves most lay their lives on the line against ghouls and enemy soldiers, Amani questions whether she can be the leader they need or if she is leading them all to their deaths.”

Quick take: Basically Traitor to the Throne blew up the series so this final book weaves everything back together for a climax worthy of this big series. There’s a ton of action, surprises and touching moments. The ending is complete and satisfactory for this epic trilogy.

The Wicked Deep by Shea Ernshaw 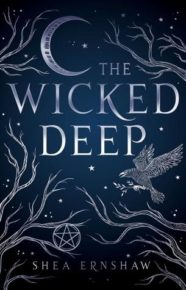 Story: “Welcome to the cursed town of Sparrow…

Where, two centuries ago, three sisters were sentenced to death for witchery. Stones were tied to their ankles and they were drowned in the deep waters surrounding the town.

Now, for a brief time each summer, the sisters return, stealing the bodies of three weak-hearted girls so that they may seek their revenge, luring boys into the harbor and pulling them under.

Like many locals, seventeen-year-old Penny Talbot has accepted the fate of the town. But this year, on the eve of the sisters’ return, a boy named Bo Carter arrives; unaware of the danger he has just stumbled into.

Mistrust and lies spread quickly through the salty, rain-soaked streets. The townspeople turn against one another. Penny and Bo suspect each other of hiding secrets. And death comes swiftly to those who cannot resist the call of the sisters.

But only Penny sees what others cannot. And she will be forced to choose: save Bo, or save herself.”

Quick take: This is an engrossing, bittersweet and melancholy fable without the raging anger that features in so many revenge stories. It’s refreshing to have this lighter touch since this a tale about redemption and finding peace with yourself. 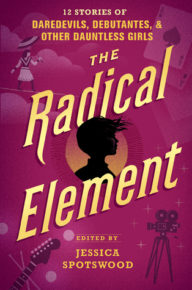 Pitch: A collection of 12 short stories spotlighting moments of rebellion across the history of the US

Story: “In an anthology of revolution and resistance, a sisterhood of YA writers shines a light on a century and a half of heroines on the margins and in the intersections.

To respect yourself, to love yourself—should not have to be a radical decision. And yet it remains as challenging for an American girl to make today as it was in 1927 on the steps of the Supreme Court. It’s a decision that must be faced whether you’re balancing on the tightrope of neurodivergence, finding your way as a second-generation immigrant, or facing down American racism even while loving America. And it’s the only decision when you’ve weighed society’s expectations and found them wanting. In The Radical Element, twelve of the most talented writers working in young adult literature today tell the stories of the girls of all colors and creeds standing up for themselves and their beliefs—whether that means secretly learning Hebrew in early Savannah, using the family magic to pass as white in 1920s Hollywood, or singing in a feminist punk band in 1980s Boston. And they’re asking you to join them.“

Quick take: The girls are outsiders for various reasons: who they are or who they want to be. Most are of the stories are historic fiction though there is a dash or two of magic for some. As always, I have some favorites, many of which are from authors I already love and a few new-to-me authors:

“The Magician” by Erin Bowman
“Lady Firebrand” by Megan Shepard
“Glamour” by Anna-Marie McLemore
“The Belle of the Ball” by Sarvenaz Tash
“Land of the Sweet, Home of the Brave” by Stacey Lee
“Take Me with U” by Sara Farizan

It’s an interesting mix of stories that call out lesser known moments in history and will make you think twice.

To Kill a Kingdom by Alexandra Cristo 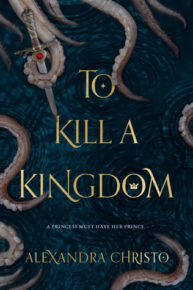 Story: “Princess Lira is siren royalty and the most lethal of them all. With the hearts of seventeen princes in her collection, she is revered across the sea. Until a twist of fate forces her to kill one of her own. To punish her daughter, the Sea Queen transforms Lira into the one thing they loathe most—a human. Robbed of her song, Lira has until the winter solstice to deliver Prince Elian’s heart to the Sea Queen or remain a human forever.

The ocean is the only place Prince Elian calls home, even though he is heir to the most powerful kingdom in the world. Hunting sirens is more than an unsavory hobby—it’s his calling. When he rescues a drowning woman in the ocean, she’s more than what she appears. She promises to help him find the key to destroying all of sirenkind for good—But can he trust her? And just how many deals will Elian have to barter to eliminate mankind’s greatest enemy?”

Quick take: The writing is hypnotic and I enjoyed several aspects of this book, but it’s not a book for everyone. If you like blood-thirsty, murderous girls, you may enjoy this more than I did.

Thanks to Macmillan (Children of Blood and Bone, To Kill a Kingdom), Penguin Teen (Hero at the Fall), Simon and Schuster (The Wicked Deep), Candlewick (The Radical Element) for providing the books for review. Want more details on my impression of these and other books? Check out my ratings and full reviews at Goodreads. 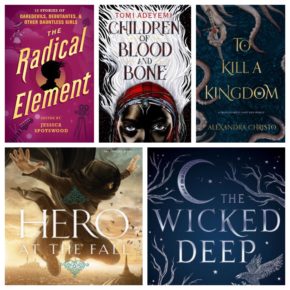