It’s been a really busy couple of months with TONS of new releases and book festival season is in full swing! It feels like I just got back from YallWest and went straight to Book Expo America (BEA)/BookCon! I met a lot of great readers, terrific authors and picked up a ton of books that I’m dying to read! I promise to do a book haul post and tell you about all the goodies, but in the meantime, let’s get right to quick takes on some new releases!

Every Exquisite Thing by Matthew Quick 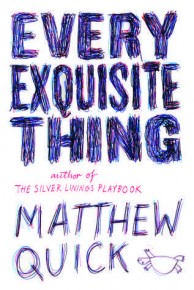 Pitch: From the author of Silver Linings Playbook, breaking free and rebelling can be a heady thing

Story: “Nanette O’Hare is an unassuming teen who has played the role of dutiful daughter, hardworking student, and star athlete for as long as she can remember. But when a beloved teacher gives her his worn copy of The Bugglegum Reaper–a mysterious, out-of-print cult classic–the rebel within Nanette awakens.

As she befriends the reclusive author, falls in love with a young troubled poet, and attempts to insert her true self into the world with wild abandon, Nanette learns the hard way that rebellion sometimes comes at a high price.”

Quick take: Matthew Quick writes with such an easy-going style that the bigger messages and mood shifts sneak up on you. The story doesn’t pull any punches and there are some painful life lessons for Nanette and all those around her. Read this book knowing that it will go to dark places, but it’s worth it to better savor all the good places.

Only Thing Worse Than Me is You by Lily Anderson 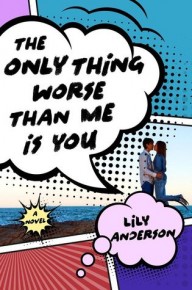 Pitch: Shakespeare’s Much Ado About Nothing gets an update at an exclusive school for geniuses and geeks

Story: “Trixie Watson has two very important goals for senior year: to finally save enough to buy the set of Doctor Who figurines at the local comic books store, and to place third in her class and knock Ben West–and his horrendous new mustache that he spent all summer growing–down to number four.

Trixie will do anything to get her name ranked over Ben’s, including give up sleep and comic books–well, maybe not comic books–but definitely sleep. After all, the war of Watson v. West is as vicious as the Doctor v. Daleks and Browncoats v. Alliance combined, and it goes all the way back to the infamous monkey bars incident in the first grade. Over a decade later, it’s time to declare a champion once and for all.

The war is Trixie’s for the winning, until her best friend starts dating Ben’s best friend and the two are unceremoniously dumped together and told to play nice. Finding common ground is odious and tooth-pullingly-painful, but Trixie and Ben’s cautious truce slowly transforms into a fandom-based tentative friendship. When Trixie’s best friend gets expelled for cheating and Trixie cries foul play, however, they have to choose who to believe and which side they’re on–and they might not pick the same side.”

Quick take: With Shakespeare’s basic story intact, it’s a merry kind of war between Trixie and Ben. Lots of sharp dialogue and enough Joss Whedon references to warm the cockles of this fangirl’s heart. Sometimes the writing was a little too precious and I wish this update didn’t keep all the boys in charge. (Yes, that’s how Shakespeare had it, but I would have hoped for a female with more power.) Still, this is a fun and breezy read with a twist to how Shakespeare ended his version.

Genius: The Game by Leopold Gout 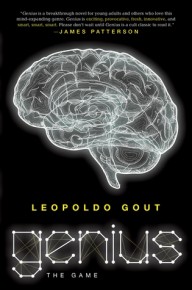 Story: “Trust no one. Every camera is an eye. Every microphone an ear. Find me and we can stop him together.

The Game: Get ready for Zero Hour as 200 geniuses from around the world go head to head in a competition hand-devised by India’s youngest CEO and visionary.

The Players:
Rex– One of the best programmers/hackers in the world, this 16-year-old Mexican-American is determined to find his missing brother.
Tunde-This14-year-old self-taught engineering genius has drawn the attention of a ruthless military warlord by single-handedly bringing electricity and internet to his small Nigerian village.
Painted Wolf-One of China’s most respected activist bloggers, this mysterious 16-year-old is being pulled into the spotlight by her father’s new deal with a corrupt Chinese official.

The Stakes: Are higher than you can imagine. Like life and death. Welcome to the revolution. And get ready to run.”

Quick take: An interesting page-turner to start a new series (warning: cliffhanger ending in the middle of the action). The Game is more about the agenda behind the competition and the ultimate motives of the mysterious benefactor.  The action moves quickly, but the story movies in fits and starts since there is so much explanation or backstory for every big story plot point. Extra points for featuring a very diverse cast of characters. Overall, it’s an entertaining story, much like a popcorn thriller.

The Crown’s Game by Evelyn Skye 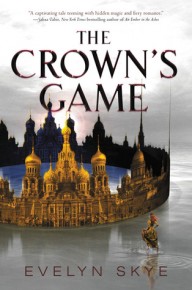 Pitch: For fans of Leigh Bardugo’s Grisha trilogy, a new saga of dueling enchanters in a fantasy Russia

Story: “Vika Andreyeva can summon the snow and turn ash into gold. Nikolai Karimov can see through walls and conjure bridges out of thin air. They are enchanters—the only two in Russia—and with the Ottoman Empire and the Kazakhs threatening, the Tsar needs a powerful enchanter by his side.

And so he initiates the Crown’s Game, an ancient duel of magical skill—the greatest test an enchanter will ever know. The victor becomes the Imperial Enchanter and the Tsar’s most respected adviser. The defeated is sentenced to death.

Raised on tiny Ovchinin Island her whole life, Vika is eager for the chance to show off her talent in the grand capital of Saint Petersburg. But can she kill another enchanter—even when his magic calls to her like nothing else ever has?

For Nikolai, an orphan, the Crown’s Game is the chance of a lifetime. But his deadly opponent is a force to be reckoned with—beautiful, whip smart, imaginative—and he can’t stop thinking about her.

And when Pasha, Nikolai’s best friend and heir to the throne, also starts to fall for the mysterious enchantress, Nikolai must defeat the girl they both love… or be killed himself.

As long-buried secrets emerge, threatening the future of the empire, it becomes dangerously clear… the Crown’s Game is not one to lose.”

Quick take: While The Crown’s Game has a fantasy setting, it really is a romance. The focus is on the emotional love triangle and not on the game itself. There are some lovely descriptions of the world and some cool things they conjure, but the tone is a bit dry. Still, it’s a good start to an extremely hyped series and I hope the books grow from here. 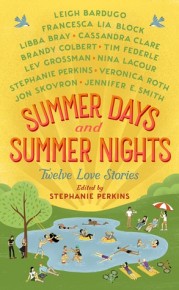 Story: “Maybe it’s the long, lazy days, or maybe it’s the heat making everyone a little bit crazy. Whatever the reason, summer is the perfect time for love to bloom. Summer Days & Summer Nights: Twelve Love Stories, written by twelve bestselling young adult writers and edited by the international bestselling author Stephanie Perkins, will have you dreaming of sunset strolls by the lake. So set out your beach chair and grab your sunglasses. You have twelve reasons this summer to soak up the sun and fall in love.

Quick take: There’s a very nice variety of stories (fantasy to contemporary) with a diverse group of characters across the dozen stories. Anthologies are always fun since you get new stories from familiar authors, but you can also discover a few who are new to you. I loved Jennifer E Smith’s story so now I need to seek out other stories she’s written. Some stories are funny, some are quirky and a couple could break your heart.

Thanks to Little, Brown’s Novl (Every Exquisite Thing), Macmillan (Only Thing Worse Than Me is You, Genius: The Game & Summer Days and Summer Nights) and HarperCollins through RT Booklover’s Convention (The Crown’s Game) for providing the books for review. Want more details on my impression of these and other books? Check out my ratings and full reviews at Goodreads.

Oh, and there will be quite a few giveaways coming up so follow me on Twitter (@Cambear) for announcements!