Reviews in a heartbeat!

Here’s my quick take on some recent and upcoming releases! 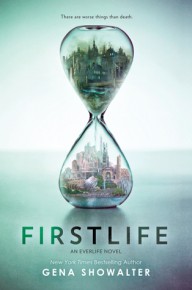 For: The Divergent fan in search of a new series

Tenley “Ten” Lockwood is an average seventeen-year-old girl…who has spent the past thirteen months locked inside the Prynne Asylum. The reason? Not her obsession with numbers, but her refusal to let her parents choose where she’ll live—after she dies.

There is an eternal truth most of the world has come to accept: Firstlife is merely a dress rehearsal, and real life begins after death.

In the Everlife, two realms are in power: Troika and Myriad, longtime enemies and deadly rivals. Both will do anything to recruit Ten, including sending their top Laborers to lure her to their side. Soon, Ten finds herself on the run, caught in a wild tug-of-war between the two realms who will do anything to win the right to her soul. Who can she trust? And what if the realm she’s drawn to isn’t home to the boy she’s falling for? She just has to stay alive long enough to make a decision…”

Quick take: This book reminds me of Divergent in some ways so if you were a fan of that book, this might be the series for you. There are some cool ideas, but be warned that it takes quite some time to set up this new world.

Reign of Shadows by Sophie Jordan 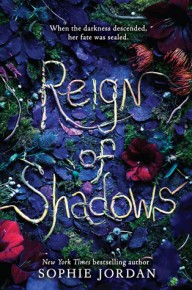 For: the romantic looking for a dark fantasy

Pitch: “Seventeen years ago, an eclipse cloaked the kingdom of Relhok in perpetual darkness. In the chaos, an evil chancellor murdered the king and queen and seized their throne. Luna, Relhok’s lost princess, has been hiding in a tower ever since. Luna’s survival depends on the world believing she is dead.

But that doesn’t stop Luna from wanting more. When she meets Fowler, a mysterious archer braving the woods outside her tower, Luna is drawn to him despite the risk. When the tower is attacked, Luna and Fowler escape together. But this world of darkness is more treacherous than Luna ever realized.

With every threat stacked against them, Luna and Fowler find solace in each other. But with secrets still unspoken between them, falling in love might be their most dangerous journey yet.

With lush writing and a star–crossed romance, Reign of Shadows is Sophie Jordan at her best.”

Quick take: Jordan’s inspiration for Fowler is Daryl Dixon from The Walking Dead so anyone who wants a romantic tale starring Daryl should pick this up! Though it takes a while to set up this world, there are interesting ideas about what would happen in a world that’s almost in perpetual night. Be warned that there’s a rough cliffhanger here! 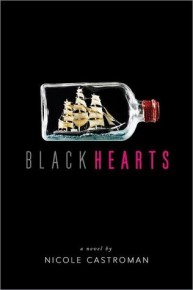 For: the romantic who wants a swoony story

Pitch: “Blackbeard the pirate was known for striking fear in the hearts of the bravest of sailors. But once he was just a young man who dreamed of leaving his rigid life behind to chase adventure in faraway lands. Nothing could stop him—until he met the one girl who would change everything.

Edward “Teach” Drummond, son of one of Bristol’s richest merchants, has just returned from a year-long journey on the high seas to find his life in shambles. Betrothed to a girl he doesn’t love and sick of the high society he was born into, Teach dreams only of returning to the vast ocean he’d begun to call home. There’s just one problem: convincing his father to let him leave and never come back.

Following her parents’ deaths, Anne Barrett is left penniless and soon to be homeless. Though she’s barely worked a day in her life, Anne is forced to take a job as a maid in the home of Master Drummond. Lonely days stretch into weeks, and Anne longs for escape. How will she ever realize her dream of sailing to Curaçao—where her mother was born—when she’s stuck in England?

From the moment Teach and Anne meet, they set the world ablaze. Drawn to each other, they’re trapped by society and their own circumstances. Faced with an impossible choice, they must decide to chase their dreams and go, or follow their hearts and stay.”

Quick take: If you’re looking for a swashbuckling pirate story, well, this isn’t it. Blackhearts is a romance featuring a young Edward Drummond, way before he became the infamous Blackbeard. (He’s barely on a pirate ship.) So pick up this book if you’re looking for a romance with a modern view point set in the historic past. The book is clearly setting up a sequel so I think we’ll see of the feared Blackbeard that we know and love/hate in Drummond before long! Also, extra points for diversity in this book! 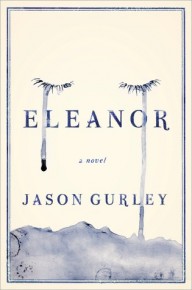 For: the Contact fan who’s looking for a moody story about family and regrets

Pitch: “Eleanor and Esmerelda are identical twins with a secret language all their own, inseparable until a terrible accident claims Esme’s life. Eleanor’s family is left in tatters: her mother retreats inward, seeking comfort in bottles; her father reluctantly abandons ship. Eleanor is forced to grow up more quickly than a child should, and becomes the target of her mother’s growing rage.

Years pass, and Eleanor’s painful reality begins to unravel in strange ways. The first time it happens, she walks through a school doorway, and finds herself in a cornfield, beneath wide blue skies. When she stumbles back into her own world, time has flown by without her. Again and again, against her will, she falls out of her world and into other, stranger ones, leaving behind empty rooms and worried loved ones.

One fateful day, Eleanor leaps from a cliff and is torn from her world altogether. She meets a mysterious stranger, Mea, who reveals to Eleanor the weight of her family’s loss. To save her broken parents, and rescue herself, Eleanor must learn how deep the well of her mother’s grief and her father’s heartbreak truly goes. Esmerelda’s death was not the only tragic loss in her family’s fragmented history, and unless Eleanor can master her strange new abilities, it may not be the last.”

Quick take: This is adult fiction even though Eleanor is an older teen and would technically make this YA. But the melancholy tone and the focus on generations of pain and regret make this an adult story and probably not for everyone. The book is surreal with all the mysterious things happening to Eleanor. The strange characters and the mysterious incidents weave together for an imaginative, and ultimately hopeful, story.

Thanks to NetGalley, HarperTeen, Simon Pulse and Blogging for Books for providing the books for review. Want more details on my impression of these and other books? Check out my ratings and full reviews at Goodreads.

I haven’t had the chance to read these books, yet, but there’s a lot of good word-of-mouth on these titles in popular series: 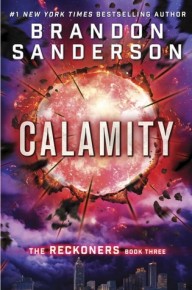 Pitch: “When Calamity lit up the sky, the Epics were born. David’s fate has been tied to their villainy ever since that historic night. Steelheart killed his father. Firefight stole his heart. And now Regalia has turned his closest ally into a dangerous enemy.

David knew Prof’s secret, and kept it even when Prof struggled to control the effects of his Epic powers. But facing Obliteration in Babilar was too much. Once the Reckoners’ leader, Prof has now embraced his Epic destiny. He’s disappeared into those murky shadows of menace Epics are infamous for the world over, and everyone knows there’s no turning back…

But everyone is wrong. Redemption is possible for Epics—Megan proved it. They’re not lost. Not completely. And David is just about crazy enough to face down the most powerful High Epic of all to get his friend back. Or die trying.”

Buzz: This is the conclusion to the terrific Reckoners trilogy that reads very much like a comic book movie. If you haven’t started this series yet, the eBook for Steelheart, the first book in the series, is on sale for $1.99 this week.

Available: February 16th. Brandon is on tour so check out his tour dates to see if he’s visiting near you. He’s also offering some goodies if you pre-order at certain stores.  The goodies include a graphic novel version of the Mitosis novella that will only be available with the pre-order so check it out!

A Gathering of Shadows by VE Schwab 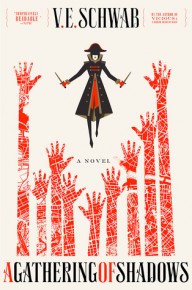 Pitch: “Four months have passed since the shadow stone fell into Kell’s possession. Four months since his path crossed with Delilah Bard. Four months since Rhy was wounded and the Dane twins fell, and the stone was cast with Holland’s dying body through the rift, and into Black London.

In many ways, things have almost returned to normal, though Rhy is more sober, and Kell is now plagued by his guilt. Restless, and having given up smuggling, Kell is visited by dreams of ominous magical events, waking only to think of Lila, who disappeared from the docks like she always meant to do. As Red London finalizes preparations for the Element Games—an extravagant international competition of magic, meant to entertain and keep healthy the ties between neighboring countries—a certain pirate ship draws closer, carrying old friends back into port.

But while Red London is caught up in the pageantry and thrills of the Games, another London is coming back to life, and those who were thought to be forever gone have returned. After all, a shadow that was gone in the night reappears in the morning, and so it seems Black London has risen again—meaning that another London must fall”

Buzz: This is the second book in a series about alternate worlds that began with A Darker Shade of Magic. The books are being shopped as a TV series so you know that there has to be a vivid world to this story.

Available: February 23. Victoria is going on tour so check out her schedule as well. She also has some pre-order goodies which I mentioned in the last Book Beat.

There are lots of other interesting releases in the next two weeks, so if you’re looking for something that’s not in a series, check out:

Heilig is one of 5 Epic Reads authors who are visiting Chicago Comic and Entertainment Expo (aka C2E2) next month. I’ll have more updates on C2E2, but in the meantime, grab a book, then come to the panel and signing!

One of the biggest books of the year will be Cassandra Clare’s newest Shadowhunter book which launches a new series, The Dark Artifices. The first book in the trilogy, Lady Midnight, tells the tale of the Los Angeles Shadowhunter institute. She will be doing a limited tour and signing through Books of Wonder if you want to get a signed copy. The first edition of the book will include an exclusive short story so pre-order a copy or buy a copy early.

Looking for a modern-day Stand By Me? The Serpent King debuts next month! While the title sounds like an epic fantasy, it’s a contemporary coming-of-age story that will make you laugh and cry. The author is offering an adorable pre-order gift of a signed library card bookplate and more goodies so pre-order now!

I’ll send you a signed library card bookplate, a signed bookmark, and a download of my album “A Season Lost”
US only pic.twitter.com/ezSM0vXuhx

It’s the final week to win a signed copy of Cinder! This is the first book in the Lunar Chronicles series so if you haven’t started, this is a great way to start a fun and beloved series. 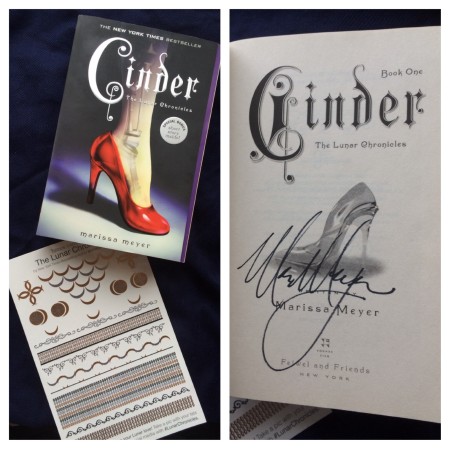