They say that summer is the slow season for publishing, but with the release of Harry Potter and the Cursed Child, I doubt August will be a slow sales month! But there are other books worthy of purchase this month so check out a few suggestions here! 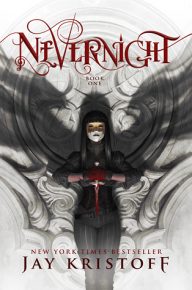 Pitch: If you were annoyed by how boring Arya Stark’s journey to assassin was in Game of Thrones, then this is the book for you.

Story: “In a land where three suns almost never set, a fledgling killer joins a school of assassins, seeking vengeance against the powers who destroyed her family.

Daughter of an executed traitor, Mia Corvere is barely able to escape her father’s failed rebellion with her life. Alone and friendless, she hides in a city built from the bones of a dead god, hunted by the Senate and her father’s former comrades. But her gift for speaking with the shadows leads her to the door of a retired killer, and a future she never imagined.

Now, Mia is apprenticed to the deadliest flock of assassins in the entire Republic—the Red Church. If she bests her fellow students in contests of steel, poison and the subtle arts, she’ll be inducted among the Blades of the Lady of Blessed Murder, and one step closer to the vengeance she desires. But a killer is loose within the Church’s halls, the bloody secrets of Mia’s past return to haunt her, and a plot to bring down the entire congregation is unfolding in the shadows she so loves.

Will she even survive to initiation, let alone have her revenge?”

Quick take: This is a big fantasy story so there is a lot of set up at the start of the book, but the action kicks off quickly. Author Jay Kristoff keeps the story moving, but also provides plenty of deeper looks into this world with amusing footnotes. Lots of bold twists and action with a take-no-prisoners heroine, this is a great launch of a new, bloodthirsty adult fantasy series. 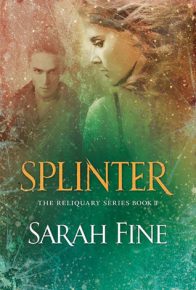 Pitch: More adventures in the dark and sexy Reliquary world!

Story: “Mattie Carver has relinquished the world of magic, with all its dark temptations. In six weeks, she’ll marry Ben Ward and claim the safe, small-town life she craves. But Mattie s talents as a reliquary, someone able to smuggle magic within her body, make her a valuable commodity, even to those she trusts the most. Forced out of retirement by a painful betrayal, she must seek the help of the man she’s tried desperately to stay away from: Ben s estranged brother, Asa.

Asa, a sensor and magic dealer, may have saved Ben months ago, but he’s complicated Mattie’s life beyond imagining. Trailed by lethal mobsters through Chicago s seamy magical underbelly and an eerie traveling carnival, Mattie struggles to endure the priceless magic she’s holding and her feelings for Asa. Once, she thought she’d chosen her path. Now the only option may be to succumb to the destiny that’s choosing her, and hope she’s strong enough to survive.”

Quick take: The first book in the series was a globe-trotting, sexy thriller that set up this dark and dangerous world of magic. The second book in the series, Splinter, is more of a personal story, engrossing with plenty of danger and twists and turns. Look for the conclusion, Mosaic in a few months and for Asa’s story in the Mayhem and Magic comics.

How to Keep Rolling After A Fall by Karole Cozzo 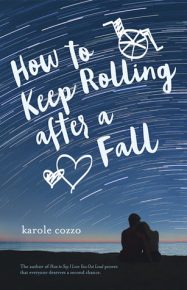 Pitch: A second chance for a former-bully

Story: “After a cyber bullying incident turns her life upside down, a handsome wheelchair rugby player shows a former mean girl that everyone deserves a second chance.

The party was at her house. The photos were posted to her Facebook account. That’s all the evidence anyone needed to condemn Nikki Baylor for a cyberbullying incident that humiliated a classmate and nearly resulted in the girl’s suicide. Now Nikki’s been expelled from her old school, her friends have abandoned her, and even her own parents can’t look her in the eye. With her plans for the future all but destroyed, Nikki resigns herself to being the girl everyone hates – almost as much as she hates herself. But then Nikki meets Pax, a spirited wheelchair rugby player who knows what it’s like when one mistake completely shatters your life. Refusing to judge her because of her past, he shows her that everyone deserves a second chance… and everyone deserves to be loved.”

Quick take: There are some refreshing point of views in this contemporary love story. This is about the redemption of a girl who sort-of-bullied and the boy in the wheelchair who isn’t as put together as he seems.

A Week of Mondays by Jessica Brody 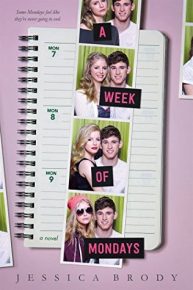 Story: “When I made the wish, I just wanted a do-over. Another chance to make things right. I never, in a million years, thought it might actually come true…

Sixteen-year-old Ellison Sparks is having a serious case of the Mondays. She gets a ticket for running a red light, she manages to take the world’s worst school picture, she bombs softball try-outs and her class election speech (note to self: never trust a cheerleader when she swears there are no nuts in her bake-sale banana bread), and to top it all off, Tristan, her gorgeous rocker boyfriend suddenly dumps her. For no good reason!

As far as Mondays go, it doesn’t get much worse than this. And Ellie is positive that if she could just do it all over again, she would get it right. So when she wakes up the next morning to find she’s reliving the exact same day, she knows what she has to do: stop her boyfriend from breaking up with her. But it seems no matter how many do-overs she gets or how hard Ellie tries to repair her relationship, Tristan always seems bent set on ending it. Will Ellie ever figure out how to fix this broken day? Or will she be stuck in this nightmare of a Monday forever?

From the author 52 Reasons to Hate My Father and The Unremembered trilogy comes a hilarious and heartwarming story about second (and third and fourth and fifth) chances. Because sometimes it takes a whole week of Mondays to figure out what you really want.”

Quick take: A fun and breezy read which flows quickly as Ellie learns a little bit more each day. There are some hilarious moments as she attempts to follow “The Rules” to keep her man. While you can see where the story is headed, it’s a pleasant journey as Ellie figures out how to make this the best Monday possible. 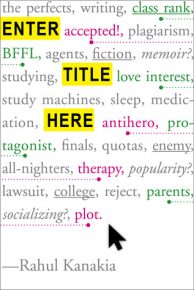 Pitch: A book about an anti-hero or a book about the pressures of high school or a book with a strong Indian female character

Story: “I’m your protagonist—Reshma Kapoor—and if you have the free time to read this book, then you’re probably nothing like me.

Reshma is a college counselor’s dream. She’s the top-ranked senior at her ultra-competitive Silicon Valley high school, with a spotless academic record and a long roster of extracurriculars. But there are plenty of perfect students in the country, and if Reshma wants to get into Stanford, and into med school after that, she needs the hook to beat them all.

What’s a habitual over-achiever to do? Land herself a literary agent, of course. Which is exactly what Reshma does after agent Linda Montrose spots an article she wrote for Huffington Post. Linda wants to represent Reshma, and, with her new agent’s help scoring a book deal, Reshma knows she’ll finally have the key to Stanford.

But she’s convinced no one would want to read a novel about a study machine like her. To make herself a more relatable protagonist, she must start doing all the regular American girl stuff she normally ignores. For starters, she has to make a friend, then get a boyfriend. And she’s already planned the perfect ending: after struggling for three hundred pages with her own perfectionism, Reshma will learn that meaningful relationships can be more important than success—a character arc librarians and critics alike will enjoy.

Of course, even with a mastermind like Reshma in charge, things can’t always go as planned. And when the valedictorian spot begins to slip from her grasp, she’ll have to decide just how far she’ll go for that satisfying ending. (Note: It’s pretty far.)”

Quick take: I love the fact that the lead character is an Asian female who’s not perfect or submissive. She’s smart, strong-willed and works hard to compensate for her short-comings. She’s determined to get into Stanford and will lie, cheat and do whatever is necessary to get in. There were quite a few times when I really wanted to kick her and that’s is why this book is not for everyone.

The Gilded Cage by Lucinda Gray 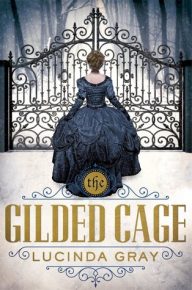 Story: “After growing up on a farm in Virginia, Walthingham Hall in England seems like another world to sixteen-year-old Katherine Randolph. Her new life, filled with the splendor of upper-class England in the 1820s, is shattered when her brother mysteriously drowns. Katherine is expected to observe the mourning customs and get on with her life, but she can’t accept that her brother’s death was an accident.

A bitter poacher prowls the estate, and strange visitors threaten the occupants of the house. There’s a rumor, too, that a wild animal stalks the woods of Walthingham. Can Katherine retain her sanity long enough to find out the truth? Or will her brother’s killer claim her life, too?”

Quick take: For a gothic historic novel, the modern vibe doesn’t quite jive with that period. There are also odd plot moments that took me out of the story so, overall, this book didn’t quite work for me.

Thanks to Macmillan (Nevernight, A Week of Mondays, How to Keep Rolling After a Fall, The Gilded Cage), 47North (Splinter) and Disney-Hyperion (Enter Title Here) for providing the books for review. Want more details on my impression of these and other books? Check out my ratings and full reviews at Goodreads.