San Diego Comic Con may be over (boo!), but there are plenty of books that will let you hold onto that feeling! The Epic Crush of a Genie Lo is a perfect popcorn book featuring a girl battling to get into college and demons. Did you catch Donald Glover’s reference to his nephew in Spider-Man: Homecoming? Read more about Miles Morales’ story in a new book by Jason Reynolds. Want a good cry? Check out This is Not the End.

The Epic Crush of Genie Lo by FC Yee 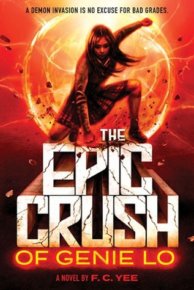 Pitch: A fun twist on Buffy the Vampire Slayer with Chinese mythology

Story: “The struggle to get into a top-tier college consumes sixteen-year-old Genie Lo’s every waking thought. But when her sleepy Bay Area town comes under siege from hell-spawn straight out of Chinese folklore, her priorities are suddenly and forcefully rearranged.

Her only guide to the demonic chaos breaking out around her is Quentin Sun, a beguiling, maddening new transfer student from overseas. Quentin assures Genie she is strong enough to fight these monsters, for she unknowingly harbors an inner power that can level the very gates of Heaven.

Genie will have to dig deep within herself to summon the otherworldly strength that Quentin keeps talking about. But as she does, she finds the secret of her true nature is entwined with his, in a way she could never have imagined…”

Quick take: This is so much fun! A perfect popcorn movie in book form! What really elevates this book is Genie herself. Funny, sarcastic, awkward and witty, her perspective makes this tale so much fun. A smart and funny debut, I look forward to more from FC Yee!

I’m giving away a signed advance copy of  The Epic Crush of a Genie Lo so watch my Twitter account (@Cambear) for more details! 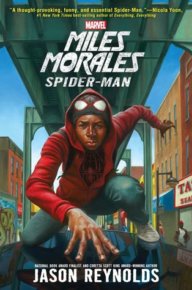 Story: “Miles Morales is just your average teenager. Dinner every Sunday with his parents, chilling out playing old-school video games with his best friend, Ganke, crushing on brainy, beautiful poet Alicia. He’s even got a scholarship spot at the prestigious Brooklyn Visions Academy. Oh yeah, and he’s Spider Man.

But lately, Miles’s spidey-sense has been on the fritz. When a misunderstanding leads to his suspension from school, Miles begins to question his abilities. After all, his dad and uncle were Brooklyn jack-boys with criminal records. Maybe kids like Miles aren’t meant to be superheroes. Maybe Miles should take his dad’s advice and focus on saving himself.

As Miles tries to get his school life back on track, he can’t shake the vivid nightmares that continue to haunt him. Nor can he avoid the relentless buzz of his spidey-sense every day in history class, amidst his teacher’s lectures on the historical ‘benefits’ of slavery and the importance of the modern-day prison system. But after his scholarship is threatened, Miles uncovers a chilling plot, one that puts his friends, his neighborhood, and himself at risk.

It’s time for Miles to suit up.”

Quick take: Miles Morales is about Miles Morales — a boy from the not-so-great side of Brooklyn who’s trying to avoid following in his uncle’s footsteps. He also happens to to Spider-Man, complete with super-cool abilities which didn’t exactly come with an instruction manual. If you’re looking for wall to wall web-slinging action, this probably isn’t the book for you. This is a thoughtful and honest tale with plenty of humor.

This Is Not the End by Chandler Baker 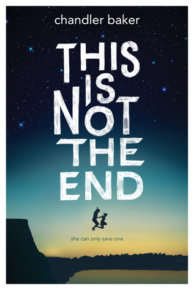 Pitch: A beautiful and sad book about grieving and friendship

Story: “On one cloudless, radiant summer afternoon, Lake Devereaux lost everything. The car crash claimed the lives of her best friend and boyfriend, the people who had become her family after her own fell apart. But she doesn’t have to lose them both.

The development of resurrection technology has changed the world. Under the new laws regulating the process, each person gets one resurrection to be used or forfeited on their eighteenth birthday. Mere weeks away from turning eighteen, Lake faces an impossible choice.

Envisioning life without one of the people she loves most is shattering enough, but Lake carries an additional burden: years ago, under family pressure, Lake secretly—and illegally—promised her resurrection to someone who isn’t even dead yet.

The search for answers about her future draws Lake more deeply into the secrets of her past until she begins to question everything about those closest to her. Betrayals and hurts both new and old threaten to eclipse the memories she once cherished.

Then Lake meets a boy unlike anyone she’s encountered before, who unflinchingly embraces the darkest parts of her life . . . and who believes that all resurrections are wrong.

Which path is the right one? And how can Lake start to heal when she can’t move on?”

Quick take: Lake has such a clear voice, you sink into this story of grief and the pressures to make the right decision as she has the power of life and death. It’s a tough, emotional read, but beautifully written and a workout for the heart.

In Some Other Life by Jessica Brody 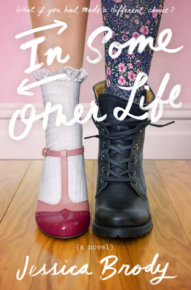 Pitch: Kennedy discovers what life would be like if she hadn’t picked a boy over a good school

Story: “Kennedy Rhodes turns down an acceptance to an elite private school, instead choosing to stay at her high school and jump at the opportunity to date the boy of her dreams. Three years later, Kennedy walks in on that same boyfriend cheating with her best friend—and wishes she had made a different choice. But when Kennedy hits her head and wakes up in the version of her life where she chose to attend the private school, she finds that maybe it’s not as perfect of a world as she once thought.”

Quick take: Enjoyable premise and some fun twists about a big “what if?” for Kennedy. In both universes, she’s very driven and successful, but she’s also quite different. This is a good contemporary book with a slight science fiction twist.

The Spellbook of the Lost and Found by Moira Fowley-Doyle 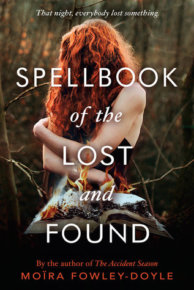 Pitch: Slow burn which weaves together 8 main characters in an atmospheric mystery

Story: “The highly anticipated new book from the acclaimed author of The Accident Season is a gorgeous, twisty story about things gone missing, things returned from the past, and a group of teenagers, connected in ways they could never have imagined.

One stormy Irish summer night, Olive and her best friend, Rose, begin to lose things. It starts with simple items like hairclips and jewelry, but soon it’s clear that Rose has lost something much bigger, something she won’t talk about, and Olive thinks her best friend is slipping away.

Then seductive diary pages written by a girl named Laurel begin to appear all over town. And Olive meets three mysterious strangers: Ivy, Hazel, and her twin brother, Rowan, secretly squatting in an abandoned housing estate. The trio are wild and alluring, but they seem lost too—and like Rose, they’re holding tight to painful secrets.

When they discover the spellbook, it changes everything. Damp, tattered and ancient, it’s full of hand-inked charms to conjure back things that have been lost. And it just might be their chance to find what they each need to set everything back to rights.

Quick take: It takes about half the book before the plot kicks off so readers will either love the slow start or will tune out. Because the POV tosses back and forth quite a few times, it takes some work to stay plugged in, but there is an interesting and creepy sort of mystery.

Thanks to Disney Hyperion (Miles Morales, This is Not the End), Abrams (The Epic Crush of Genie Lo), Penguin (The Spellbook of the Lost and Found) and Macmillan (In Some Other Life) for providing the books for review. Want more details on my impression of these and other books? Check out my ratings and full reviews at Goodreads. 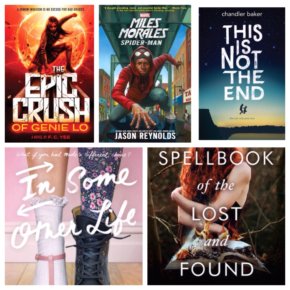