For the past couple of months, I’ve been lucky enough to attend some big bookish events starting with RT Booklover’s Convention, YallWest (which I know I still need to recap!) and then BookCon! Each event was successively bigger and crazier, but still lots of fun!

BookCon started a few years ago as an event for fans right after an industry event, Book Expo America (BEA), finishes since the publishers and authors are already around. After I spent a few days at BEA, the crowd and energy of BookCon were a huge change and a good reminder about what readers are all about.

BookCon hosts a slew of signings by dozens of authors. The signings are all wristbanded with distribution at 8 AM, a few hours before BookCon begins at 10 AM. The line at 6:30 AM went the length of the convention building, across the bridge and over to the next convention building. Clearly people wanted to get into the signings! 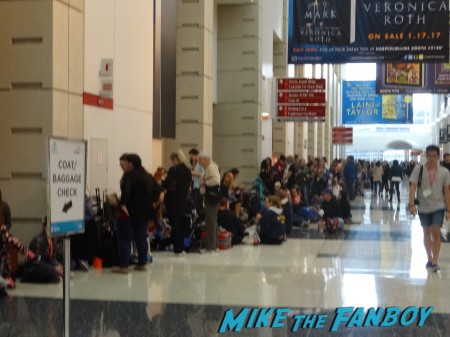 At 8 AM, there was a quick security check as we headed into the queue hall and into more lines. The autograph lines were divided into 5 different chutes, based on when the author was signing. Each person was allowed to pick one wristband per chute. This put the kabosh on the dream of many young attendees who have never been to a big fan event and had, um, unrealistic ideas of what could be accomplished in a day. No, one person can’t do 4 signings in one hour. 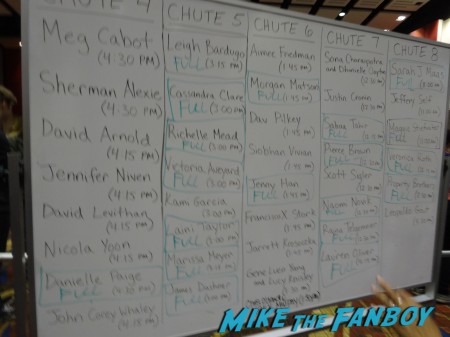 The most popular authors ran out of wristbands within the first half hour (Cassandra Clare, Richelle Mead, Sarah J Maas, Marissa Meyer). By 9AM, only a dozen authors were left and people headed straight into the exhibit hall line. With over 7000 people in attendance, I think over half were in line by the time the doors opened. 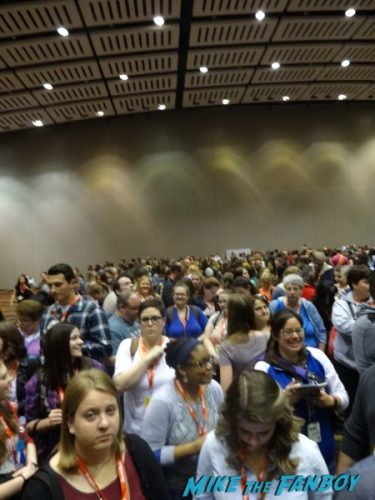 At 10 AM, the line headed over to the exhibit hall. Some people headed straight to the autograph lines with their shiny new wristbands. Each signing was a little different with some giving away Advance Reading Copies (ARCs), some requiring a purchase and some allowing you to bring books from home. Regardless, books were available for purchase at the line so it was easy to pick up a book for the signing. 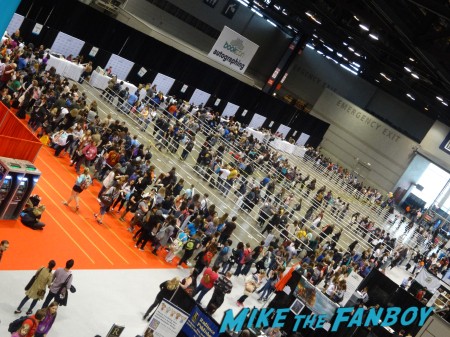 The BookCon autograph area usually hosts at least one celebrity book signing. This year, Jonathan and Drew Scott (better known as the Property Brothers) were on hand to sign copies of their new book. 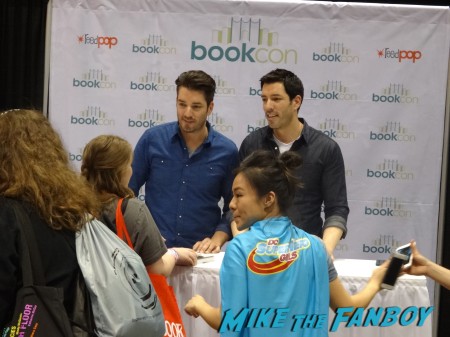 I got a couple of wristbands including Lauren Oliver who’s latest book, Replica, sounds like a fascinating new twist with three different ways to read the story. (To read more about this and other books, check out my round up on the most intriguing new books from BEA. Don’t forget to vote on what books I should put into my BEA/BookCon giveaway by commenting on that post!) 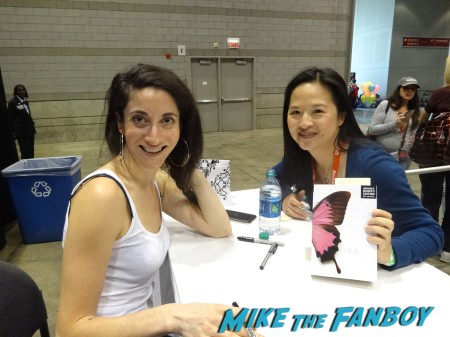 I also got a wristband for Gene Luen Yang who is this year’s National Ambassador for Young People’sLliterature. He’s an advocate for using graphic novels for education and to promote diversity. While in line, I chatted with this lady who taught his award-winning American Born Chinese to her Latino ESL kids. American Born Chinese is about cultural assimilation and speaks to people who straddle two cultures. 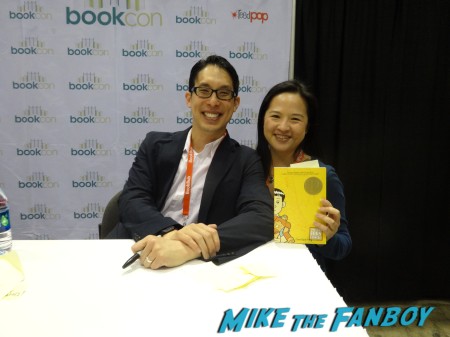 Many of the publisher booths hosted signings and giveaways. Alexandra Bracken signed samplers of Wayfarer (due out in January) at the Disney booth. With a massive line, she kindly extended her signing time to take care of as many people as she could. 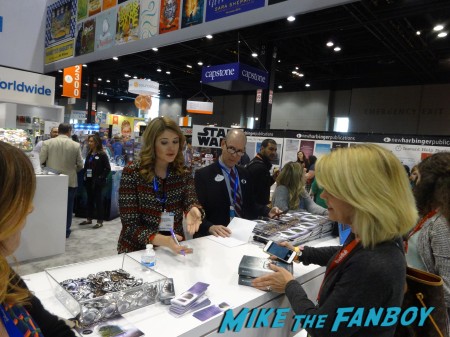 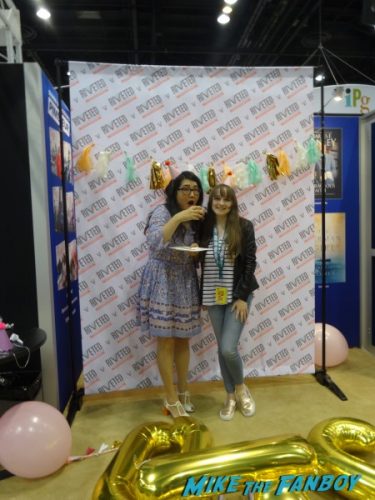 Scholastic started off the day with a blank wall and a question about what Harry Potter means to you. By the end of the day, the wall was covered. 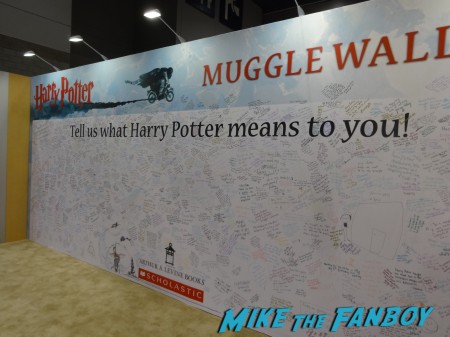 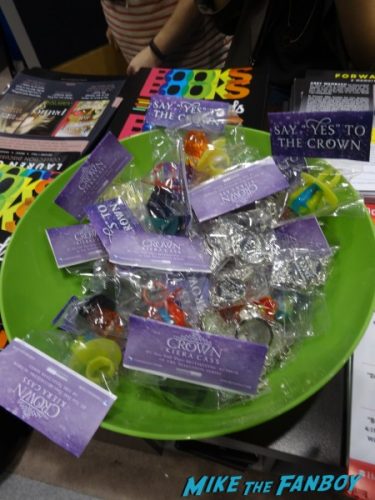 Epic Reads also had a lounge where fans could escape the madness for a quiet moment and to read some of the books laying around. They also hosted author round tables/speed dating which I was very lucky to attend. I’ll write more about it in another post! 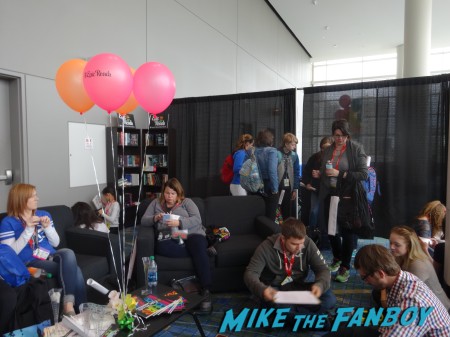 First in Line (Random House) hosted a breakfast which included a signing with some of the most anticipated titles of the fall including Gemina by Jay Kristoff and Amie Kaufman and The Sun is Also a Star by Nicola Yoon. They were taking the first 300 people which sounds like a large number, but this was the big event at the start of the day and there was a stampede.

Jay Kristoff had tweeted out that he would hand out 3 copies of his new book Nevernight if you could find him outside the Penguin booth at noon. As you can imagine, there were a few of us who found him and that attracted a bit of a crowd. Eventually, there were about a dozen people so we played the Australian equivalent of eenie meanie which is predicting which of three positions Jay’s writing partner, Amie, would pick. By process of elimination, the three books were distributed. 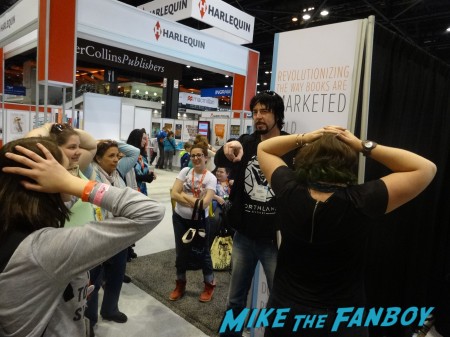 Penguin Teen also hosted a few events including a reading by Ransom Riggs. He read one of the new stories from Tales of the Peculiar. 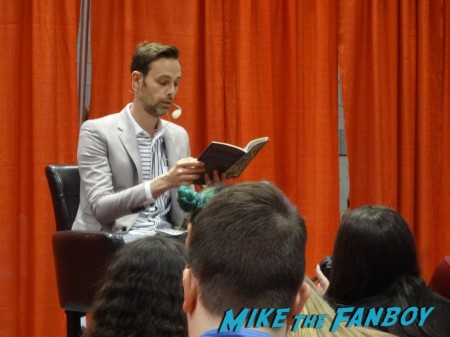 There were also lots of panels which usually had a light tone.  For example, there was truth or dare with Leigh Bardugo and Marissa Meyer. 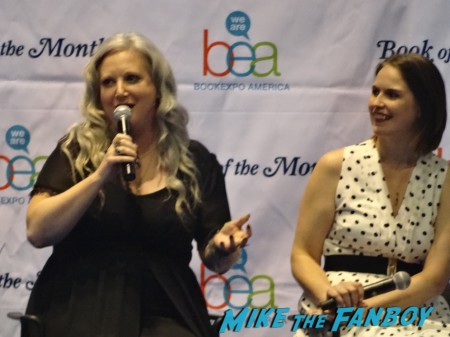 In the end, the BookCon was a lot of fun with lots of signings, authors, books and giveaways. There was so much going on that some fans wished events were spread out over 2 days so they could get to do more stuff. There were lots of grumblings that schedulers were evil and purposely scheduled things on top of each other to divide the crowd and break hearts. 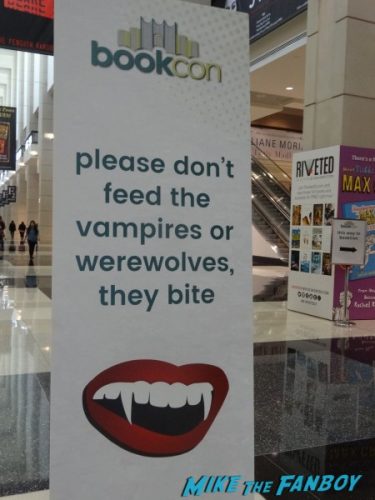 Overall, the event ran smoothly with good communication among the staff and with fans. Based on online chatter, BookCon opened up badge pick up earlier to accommodate the early arrivals for the autographing lines.

The one snafu I ran across was at a ticketed signing at BEA where there was miscommunication between the publisher and the BEA staff. I have no idea who was at fault, but the publisher made a gesture to make up for the issue. The BEA staff member ran and hid while another BEA staff member apologized. Since this ticket was a real pain to get, this was disappointing. Ah well. Like I said, everything else ran well.

Back at BookCon, most of the programming focused on YA with some romance and adult fiction. There were also a few science fiction/fantasy authors (Pierce Brown, Justin Cronin), but not a lot here or at BEA. Adult SF/F titles didn’t get a lot of love at either event which is strange since the Nebula awards were the night before and there were plenty of authors in town.

BookCon is also a great reminder for publishers that their most enthusiastic audience is diverse. It was a bit of a shock to see the rainbow of humanity at BookCon after the homogeneity of BEA.

So BookCon was a lot of fun, but come early, have a plan and have realistic expectations. Next year, BEA and BookCon move back to New York. They will each be 2 days which will make BEA really hectic and give BookCon more room to breathe.