While talking about new books is fun and exciting, there are tons of books already on the shelf that need a little love. So this edition of Book Beat will focus on books you can run out and buy now (instant gratification!) and some other interesting news.

The Wrath & the Dawn – Renee Ahdieh 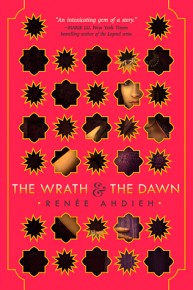 er who wants a romantic tale with a dash of magic.

Pitch: “In a land ruled by a murderous boy-king, each dawn brings heartache to a new family. Khalid, the eighteen-year-old Caliph of Khorasan, is a monster. Each night he takes a new bride only to have a silk cord wrapped around her throat come morning. When sixteen-year-old Shahrzad’s dearest friend falls victim to Khalid, Shahrzad vows vengeance and volunteers to be his next bride. Shahrzad is determined not only to stay alive, but to end the caliph’s reign of terror once and for all.

Night after night, Shahrzad beguiles Khalid, weaving stories that enchant, ensuring her survival, though she knows each dawn could be her last. But something she never expected begins to happen: Khalid is nothing like what she’d imagined him to be. This monster is a boy with a tormented heart. Incredibly, Shahrzad finds herself falling in love. How is this possible? It’s an unforgivable betrayal. Still, Shahrzad has come to understand all is not as it seems in this palace of marble and stone. She resolves to uncover whatever secrets lurk and, despite her love, be ready to take Khalid’s life as retribution for the many lives he’s stolen. Can their love survive this world of stories and secrets?”

Review: Based on 1001 Arabian Nights, Renee Ahdieh makes this legend fresh and adds a twist of fantasy. Terrific writing with a light touch, you’ll fall quickly into this world. The Wrath & the Dawn justified all its buzz and its standing on so many “best of 2015” lists. Luckily, there is a second book in the series called The Rose & the Dagger which is set for a May release. (Yeah!) 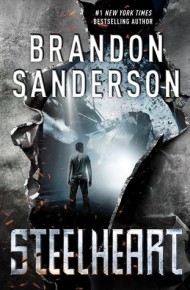 For: The superhero fan or someone who wants a rousing adventure

Pitch: “Ten years ago, Calamity came. It was a burst in the sky that gave ordinary men and women extraordinary powers. The awed public started calling them Epics. But Epics are no friend of man. With incredible gifts came the desire to rule. And to rule man you must crush his wills.

Nobody fights the Epics…nobody but the Reckoners. A shadowy group of ordinary humans, they spend their lives studying Epics, finding their weaknesses, and then assassinating them.

And David wants in. He wants Steelheart – the Epic who is said to be invincible. The Epic who killed David’s father. For years, like the Reckoners, David’s been studying, and planning – and he has something they need. Not an object, but an experience.

Review: This is my first Brandon Sanderson book and it won’t be my last! A fun, thrilling and original action story that reads as strong as any of the better comic movies out there. The pace is brisk and there’s a full journey with clever plot twists that will keep you turning the pages. Sanderson quickly establishes a vivid world and this first book is completely satisfying and still leaves plenty of room for the next books in the trilogy. The next book is Firefight (which I’m reading now) and the final book, Calamity, arrives next month. 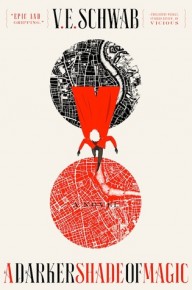 For: The reader who likes parallel-universe fantasy flavored with Victorian England

Pitch: “Kell is one of the last Travelers—rare magicians who choose a parallel universe to visit.

Grey London is dirty, boring, lacks magic, ruled by mad King George. Red London is where life and magic are revered, and the Maresh Dynasty presides over a flourishing empire. White London is ruled by whoever has murdered their way to the throne. People fight to control magic, and the magic fights back, draining the city to its very bones. Once there was Black London—but no one speaks of that now.

Officially, Kell is the Red Traveler, personal ambassador and adopted Prince of Red London, carrying the monthly correspondences between royals of each London. Unofficially, Kell smuggles for those willing to pay for even a glimpse of a world they’ll never see. This dangerous hobby sets him up for accidental treason. Fleeing into Grey London, Kell runs afoul of Delilah Bard, a cut-purse with lofty aspirations. She robs him, saves him from a dangerous enemy, then forces him to another world for her ‘proper adventure’.

But perilous magic is afoot, and treachery lurks at every turn. To save all of the worlds, Kell and Lila will first need to stay alive—trickier than they hoped.”

Review: I’m not sure why it took me so long to get into this book since it starts off well with interesting characters and enough “huh?” moments to make you think. However, it did take a while, but it was worth sticking around for when the book hits its stride about 125 pages in.

It’s a little fantasy, a little Victorian, a little bloody and a good read. It’s original and surprising with characters you want to root for. I also like the fact that this isn’t a cliffhanger ending (though there are clearly more stories to tell). The sequel, A Gathering of Shadows, drops next month. 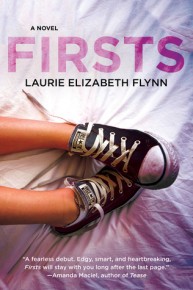 For: Realistic fiction fans who liked the movie Easy A but wanted more sex and less snarky

Pitch: “Seventeen-year-old Mercedes Ayres has an open-door policy when it comes to her bedroom, but only if the guy fulfills a specific criteria: he has to be a virgin. Mercedes lets the boys get their awkward, fumbling first times over with, and all she asks in return is that they give their girlfriends the perfect first time- the kind Mercedes never had herself.

Keeping what goes on in her bedroom a secret has been easy- so far. Her absentee mother isn’t home nearly enough to know about Mercedes’ extracurricular activities, and her uber-religious best friend, Angela, won’t even say the word “sex” until she gets married. But Mercedes doesn’t bank on Angela’s boyfriend finding out about her services and wanting a turn- or on Zach, who likes her for who she is instead of what she can do in bed.

When Mercedes’ perfect system falls apart, she has to find a way to salvage her reputation and figure out where her heart really belongs in the process. Funny, smart, and true-to-life, FIRSTS is a one-of-a-kind young adult novel about growing up.”

Review: This story borrows the premise of Easy A, but adds sex and takes out the ultra-quippy dialogue. No, there aren’t a lot of steamy scenes, but it’s definitely a key part of the story. Laurie Elizabeth Flynn writes smoothly, but Mercedes isn’t the most likeable character since she’s blind to the pain that she’s causing herself and her friends. Overall, it’s an enjoyable debut by a new author, but be aware of some tough situations and emotions since this may not be a book for everyone.

ICYMI: Game of Thrones will start to spoil A Song of Ice and Fire (sort of) 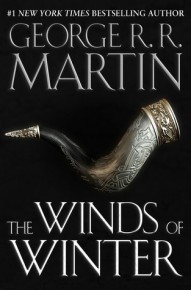 As hard as he tried, George RR Martin just can’t get The Winds of Winter out before the next season of Game of Thrones starts on April 24th. As we head into the sixth season, book readers will know as much about the future of Westeros as non-readers. This is a day that many had predicted and dreaded.

In broad strokes, the TV show will have spoilers for future books, but the details will be quite different since there are some major detours. HBO is trying to negotiate a total of 8 seasons so it’ll be curious to see if they can use three seasons to cover The Winds of Winter and A Dream of Spring (the seventh and projected final book in the series). In the end, one assumes both the show and the books will crown the same person for the Iron Throne…eventually.

But readers should take heart! George thought he had a shot at getting the book done last year and now, without a specific deadline, perhaps the muse will help him finish off in time to get the book out this year. His publisher is ready to go with a cover already done and the printers ready to sprint to get this book out. Fingers crossed!

Emma Watson’s Book Club
Playing Hermione Granger and Belle from the upcoming Beauty and the Beast live-action movie seems to have rubbed off on Emma Watson. Emma is starting her own book club called Our Shared Shelf. The woman’s right activist picked Gloria Steinem’s My Life on the Road to kick off the club. To join in on the discussion, head over to Goodreads. 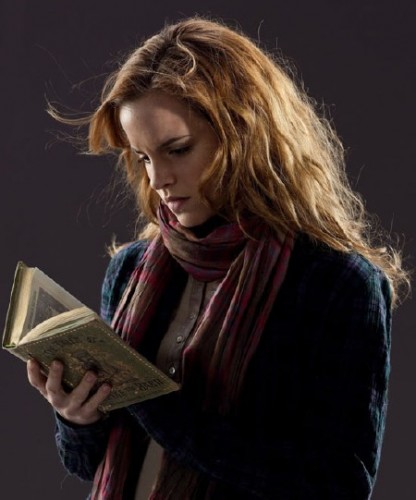 If you want a movie that’s just plain fun, make sure you head to the theaters for Pride and Prejudice and Zombies on Feburary 5th. Based on the Seth Grahame-Smith book, the story is just that: Jane Austen’s beloved story is sprinkled into a zombie setting. I saw a preview last fall and the movie hits the right tone with its comic/horror vibe in a Regency setting. While Sam Riley isn’t quite the Darcy that Colin Firth or Matthew Macfadyen was, the rest of the cast is great and who doesn’t love Lena Headey as Lady Catherine de Bourgh?

Giveaway!
There’s a couple of days left to enter my Twitter giveaway for Shadowhunters swag. I’m hoping that the series is a worthy adaption of the books by Cassandra Clare so tune into Freefrom (formerly ABC Family) Tuesday night to find out! To enter, follow and re-tweet the pinned tweet for @Cambear. 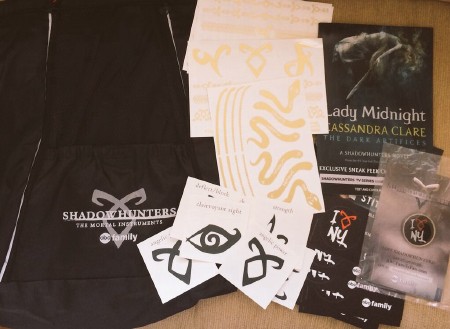 For more of my ratings and reviews, you can head over to my profile on Goodreads.