A lot of great YA fantasies and diverse authors in this batch of Book Beat! There are great titles if you want a book to escape in and great books if you want to get some perspective on some of the hot topics of this (bizarre) election year. 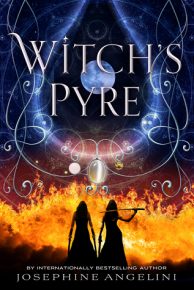 Pitch: The conclusion to the epic Worldwalker Trilogy is filled with witches, parallel worlds, mutant creatures and a satisfying ending

Story: “Lily Proctor has come a long way from the weak, sickly girl she used to be. She has gained power as a witch and a leader, found her way home, chosen to face battle again, and (after losing her first love and being betrayed by her new love) she has learned more about loss and grief than she ever wanted to know.

Thrust once again into a society different from anything they have ever seen, Lily and her coven are determined to find answers―to find a new path to victory, a way to defeat the monstrous Woven without resorting to nuclear weapons or becoming a tyrannical mass murderer like her alternate self, Lillian. But sometimes winning requires sacrifices . . . and when the only clear path to victory lies at Lillian’s side, what price will Lily be willing to pay?

Quick take: Firewalker, book 2 in the series, ended with a game changer so it’s a relief to finally pick up the conclusion! Witch’s Pyre has plenty of fantastic locations, action, magic, creatures, characters and romance and builds to a huge and satisfying conclusion. The story feels like this is the only way things could have progressed. I enjoyed this unique fantasy and its messages of unity, tolerance and so much more.

A Shadow Bright and Burning by Jessica Cluess 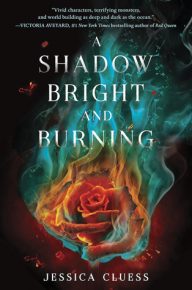 Pitch: An imaginative and fun Victorian fantasy with magic and evil monsters

Story: “I am Henrietta Howel. The first female sorcerer. The prophesied one. Or am I?

Henrietta Howel can burst into flames. When she is brought to London to train with Her Majesty’s sorcerers, she meets her fellow sorcerer trainees, young men eager to test her powers and her heart. One will challenge her. One will fight for her. One will betray her. As Henrietta discovers the secrets hiding behind the glamour of sorcerer life, she begins to doubt that she’s the true prophesied one. With battle looming, how much will she risk to save the city–and the one she loves?”

Quick take: This world is vividly drawn and well-thought out with layers of history yet to be revealed. There’s a lively cast of characters to balance out the dark story line of a divided society attacked by beings of immense power. There’s plucky Henrietta, snarky and fun Magnus, Darcy-like Blackwood and more well-drawn characters that keep the story moving. A great start to a new series. 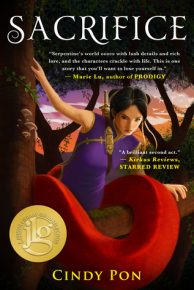 Pitch: The lovely conclusion to a high fantasy duology influenced by Chinese myths and legends

Story: “Sacrifice, the sequel to Serpentine, plunges Skybright into the terrifying underworld where demons are bred and whisks her up to the magnificent Mountain of Heavenly Peace where the gods dwell.

Stone is stripped of his immortal status and told to close hell’s breach, which mysteriously remains open, threatening mortals.

Zhen Ni, Skybright’s former mistress and friend, has been wed to the strange and brutish Master Bei, and finds herself trapped in an opulent but empty manor. When she discovers half-eaten corpses beneath the estate, she realizes that Master Bei is not all that he seems.

As Skybright works to free Zhen Ni with the aid of Kai Sen and Stone, they begin to understand that what is at risk is more far-reaching then they could ever have fathomed.”

Quick take: Serpentine did a terrific job of building this fantasy world and introducing us to Skybright as she learns about her mysterious, demonic heritage. Sacrifice is where she and her friends come to terms with their demons and where other creatures belong. There are terrific and wildly imaginative images, creatures and lots of unexpected twists which keep the story moving. A perfect bit of escapism into a very colorful and different world. 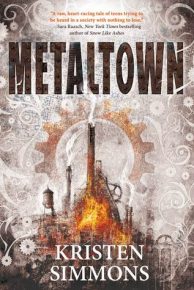 Story: “Metaltown, where factories rule, food is scarce, and hope is in short supply.

The rules of Metaltown are simple: Work hard, keep your head down, and watch your back. You look out for number one, and no one knows that better than Ty. She’s been surviving on the factory line as long as she can remember. But now Ty has Colin. She’s no longer alone; it’s the two of them against the world. That’s something even a town this brutal can’t take away from her. Until it does.

Lena’s future depends on her family’s factory, a beast that demands a ruthless master, and Lena is prepared to be as ruthless as it takes if it means finally proving herself to her father. But when a chance encounter with Colin, a dreamer despite his circumstances, exposes Lena to the consequences of her actions, she’ll risk everything to do what’s right.

In Lena, Ty sees an heiress with a chip on her shoulder. Colin sees something more. In a world of disease and war, tragedy and betrayal, allies and enemies, all three of them must learn that challenging what they thought was true can change all the rules.

An enthralling story of friendship and rebellion, Metaltown will have you believing in the power of hope.”

Quick take: I love the idea of revolution and sticking it to the man. Metaltown is a really miserable world, just ripe for a little revolution. I enjoyed some parts of the book, but I wish the character development relied a little less on brutality to earn sympathy. (That’s a pet peeve of mine so I think others will probably enjoy this more.)

The Fortunes by Peter Ho Davies 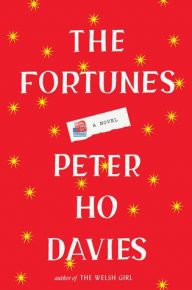 Story: Sly, funny, intelligent, and artfully structured, The Fortunes recasts American history through the lives of Chinese Americans and reimagines the multigenerational novel through the fractures of immigrant family experience.

Inhabiting four lives—a railroad baron’s valet who unwittingly ignites an explosion in Chinese labor, Hollywood’s first Chinese movie star, a hate-crime victim whose death mobilizes Asian Americans, and a biracial writer visiting China for an adoption—this novel captures and capsizes over a century of our history, showing that even as family bonds are denied and broken, a community can survive—as much through love as blood.

Building fact into fiction, spinning fiction around fact, Davies uses each of these stories—three inspired by real historical characters—to examine t process of becoming not only Chinese American, but American.

Quick take: Everyone’s experience is always different and the variety of characters both embrace and are ashamed of their heritage in different ways. The subject matter is clearly an unresolved personal issue for the author so there are times that he gets a bit indulgent.  With the different narrative voices for each of the stories, at least one of these stories is bound to resonate with the reader, but all of them may not. Still, this is worth reading for a unique perspective on straddling different cultures.

Thanks to Feiwel and Friends (Witch’s Pyre), Random House (A Shadow Bright and Burning), Month9Books (Sacrifice), Tor (Metaltown) and HMH (The Fortunes) for providing the books for review. Want more details on my impression of these and other books? Check out my ratings and full reviews at Goodreads. 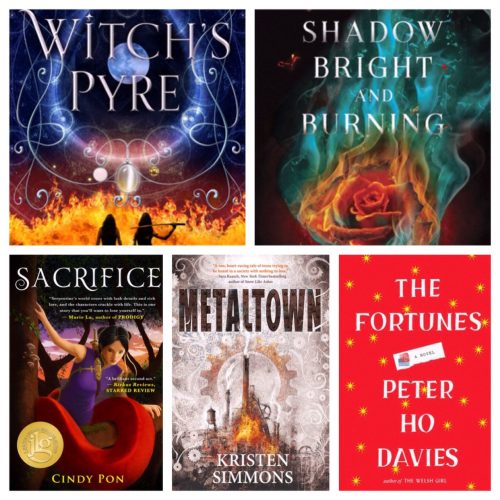