September and October are some of the happiest months for readers with an avalanche of new books dropping. If you don’t want to go broke on September 26th, here are some quick takes on some of those new titles! 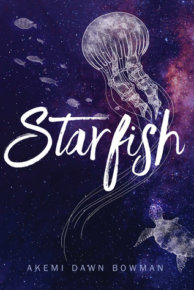 Pitch: Beautiful, aching, sweet, tearful,  and honest story about a fragile young girl coming to terms with her self-worth

Story: “Kiko Himura has always had a hard time saying exactly what she’s thinking. With a mother who makes her feel unremarkable and a half-Japanese heritage she doesn’t quite understand, Kiko prefers to keep her head down, certain that once she makes it into her dream art school, Prism, her real life will begin.

But then Kiko doesn’t get into Prism, at the same time her abusive uncle moves back in with her family. So when she receives an invitation from her childhood friend to leave her small town and tour art schools on the west coast, Kiko jumps at the opportunity in spite of the anxieties and fears that attempt to hold her back. And now that she is finally free to be her own person outside the constricting walls of her home life, Kiko learns life-changing truths about herself, her past, and how to be brave.

From debut author Akemi Dawn Bowman comes a luminous, heartbreaking story of identity, family, and the beauty that emerges when we embrace our true selves.”

Quick take: Kiko is fragile, but stronger than she knows even though she’s been taught that what makes her different is bad. An emotionally abusive mother, distant siblings, absent father and a close-minded, racist town make for a tough childhood and a strong case of anxiety. Akemi Dawn Bowman writes Kiko with such a relatable and heart-wrenching voice you can’t help but follow along this difficult journey. 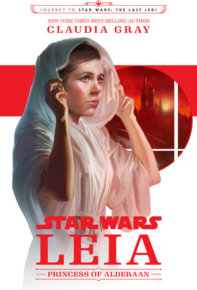 Quick take: At sixteen years old, Leia is on the cusp of officially being named the future queen of Alderaan. She’s focused on using her title and position to help so many oppressed by the Emperor, but things get complicated when a few humanitarian missions have unexpected ripple effects.

Star Wars fans will enjoy seeing how the young Leia became a princess and a rebel. Claudia Gray is Leia’s unofficial biographer and she captures that sharp intelligence and sense of humor that we all love about her. This is a great story and has the added bonus of Easter eggs with characters you love (and hate) from Rogue One, A New Hope, Star Wars: Rebels and more. 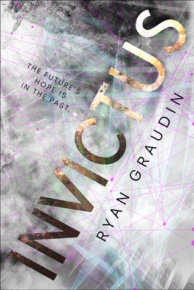 Farway Gaius McCarthy was born outside of time. The son of a time-traveling Recorder from 2354 AD and a gladiator living in Rome in 95 AD, Far’s birth defies the laws of nature. Exploring history himself is all he’s ever wanted, and after failing his final time-traveling exam, Far takes a position commanding a ship with a crew of his friends as part of a black market operation to steal valuables from the past.

But during a heist on the sinking Titanic, Far meets a mysterious girl who always seems to be one step ahead of him. Armed with knowledge that will bring Far’s very existence into question, she will lead Far and his team on a race through time to discover a frightening truth: History is not as steady as it seems.”

Quick take: It’s an epic story about a world where time travel is normal and a way to steal luxury food items. There’s a fascinating world here with so many ideas and a lot of comment on our world today. It’s smart and interesting and a mash up of so many things. There’s a bit of romance (not the focus), history, science fiction, adventure and even a look at fashion and cursing through the years. A book to escape into.

There’s Someone Inside Your House by Stephanie Perkins 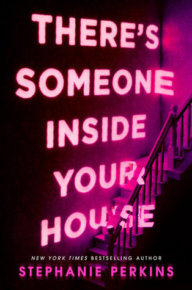 Pitch: “Scream meets YA in this hotly-anticipated new novel from the bestselling author of Anna and the French Kiss.”

Story: “One-by-one, the students of Osborne High are dying in a series of gruesome murders, each with increasing and grotesque flair. As the terror grows closer and the hunt intensifies for the killer, the dark secrets among them must finally be confronted.

Quick take: Teen slasher books are not normally my genre, but this one is genuinely scary with heart and teenaged angst. It does borrow a page from the movie Scream with the sudden and gruesome deaths that hold a small town hostage. I enjoyed this book more for the characters and the not-quite by-the-numbers teen romance. Still it’s fun and sweet and swoony until someone dies. 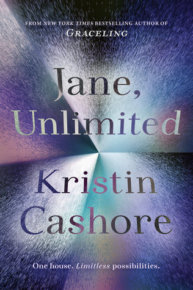 Pitch: Tired of reading the same old thing? Then grab this unusual and  experimental book with multiple endings

Story: “Jane has lived an ordinary life, raised by her aunt Magnolia—an adjunct professor and deep sea photographer. Jane counted on Magnolia to make the world feel expansive and to turn life into an adventure. But Aunt Magnolia was lost a few months ago in Antarctica on one of her expeditions.

Now, with no direction, a year out of high school, and obsessed with making umbrellas that look like her own dreams (but mostly just mourning her aunt), she is easily swept away by Kiran Thrash—a glamorous, capricious acquaintance who shows up and asks Jane to accompany her to a gala at her family’s island mansion called Tu Reviens.

Jane remembers her aunt telling her: ‘If anyone ever invites to you to Tu Reviens, promise me that you’ll go.’ With nothing but a trunkful of umbrella parts to her name, Jane ventures out to the Thrash estate. Then her story takes a turn, or rather, five turns. What Jane doesn’t know is that Tu Reviens will offer her choices that can ultimately determine the course of her untethered life. But at Tu Reviens, every choice comes with a reward, or a price.”

Quick take: The first section of the book is about Jane, an orphan, who visits this strange house filled with people with very complicated relationships. There are tons of subplots and assorted mysteries which come to a head when Jane goes to talk to one of five people. The book explores what happens for each person Jane could have chose. So you’re sort of getting 5 different books and some very different stories/genres and endings. 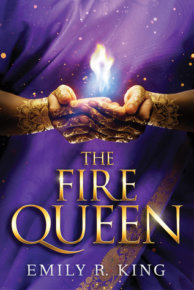 Pitch: The sequel in a fantasy series that began with The Hundredth Queen

Story: “In the second book in The Hundredth Queen series, Emily R. King once again follows a young warrior queen’s rise to meet her destiny in a richly imagined world of sorcery and forbidden powers.

Though the tyrant rajah she was forced to marry is dead, Kalinda’s troubles are far from over. A warlord has invaded the imperial city, and now she’s in exile. But she isn’t alone. Kalinda has the allegiance of Captain Deven Naik, her guard and beloved, imprisoned for treason and stripped of command. With the empire at war, their best hope is to find Prince Ashwin, the rajah’s son, who has promised Deven’s freedom on one condition: that Kalinda will fight and defeat three formidable opponents.

But as Kalinda’s tournament strengths are once again challenged, so too is her relationship with Deven. While Deven fears her powers, Ashwin reveres them—as well as the courageous woman who wields them. Kalinda comes to regard Ashwin as the only man who can repair a warring world and finds herself torn between her allegiance to Deven and a newly found respect for the young prince.

With both the responsibility to protect her people and the fate of those she loves weighing heavily upon her, Kalinda is forced again to compete. She must test the limits of her fire powers and her hard-won wisdom. But will that be enough to unite the empire without sacrificing all she holds dear?” 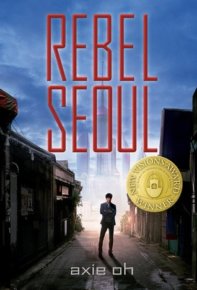 Story: “After a great war, the East Pacific is in ruins. In brutal Neo Seoul, where status comes from success in combat, ex-gang member Lee Jaewon is a talented pilot rising in the ranks of the academy. Abandoned as a kid in the slums of Old Seoul by his rebel father, Jaewon desires only to escape his past and prove himself a loyal soldier of the Neo State.

When Jaewon is recruited into the most lucrative weapons development division in Neo Seoul, he is eager to claim his best shot at military glory. But the mission becomes more complicated when he meets Tera, a test subject in the government’s supersoldier project. Tera was trained for one purpose: to pilot one of the lethal God Machines, massive robots for a never-ending war.

With secret orders to report on Tera, Jaewon becomes Tera’s partner, earning her reluctant respect. But as respect turns to love, Jaewon begins to question his loyalty to an oppressive regime that creates weapons out of humans. As the project prepares to go public amidst rumors of a rebellion, Jaewon must decide where he stands—as a soldier of the Neo State, or a rebel of the people.

Quick take: I loved the futuristic Korean setting and the idea of a military academy. There’s a lot of potential here, but the characters, plot and world-building felt muddled. (For more details, look to my  Goodreads review.)

September and October are packed with so many new books (see above!) that I only scratched the surface of what’s out there. Here’s a few more books that I have on my reading list: 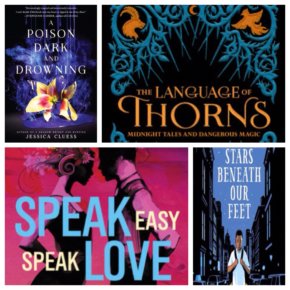 Thanks to Simon and Schuster (Starfish), Disney Hyperion (Star Wars: Leia, Princess of Alderaan), Little, Brown (Invictus), Penguin Teen (There’s Someone Inside Your House, Jane, Unlimited), Skyscape (The Fire Queen) and Tu Books (Rebel Seoul) for providing the books for review. Want more details on my impression of these and other books? Check out my ratings and full reviews at Goodreads. 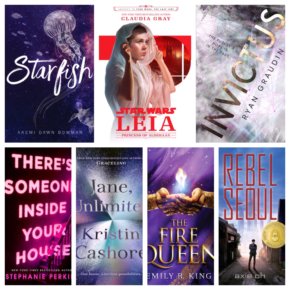