Save your pennies up since September 18th is one of those days you can go broke at the bookstore! There’s lots of good stuff by a whole bunch of diverse folks so everyone can find something! 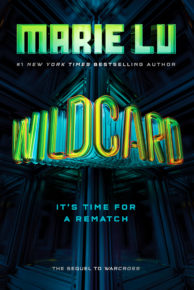 Pitch: The sequel to the terrific Warcross, where Emika deals with the consequences of that huge twist ending

Story: “Emika Chen barely made it out of the Warcross Championships alive. Now that she knows the truth behind Hideo’s new NeuroLink algorithm, she can no longer trust the one person she’s always looked up to, who she once thought was on her side.

Determined to put a stop to Hideo’s grim plans, Emika and the Phoenix Riders band together, only to find a new threat lurking on the neon-lit streets of Tokyo. Someone’s put a bounty on Emika’s head, and her sole chance for survival lies with Zero and the Blackcoats, his ruthless crew. But Emika soon learns that Zero isn’t all that he seems–and his protection comes at a price.

Caught in a web of betrayal, with the future of free will at risk, just how far will Emika go to take down the man she loves?”

Quick Take: Wildcard spends the first half unraveling the consequences of Warcross’s crazy ending and then goes into big action mode. It’s fun and twisty so think Inception and The Matrix. It’s a satisfying and worthy ending to a great duology.

The Impossible Girl by Lydia Kang 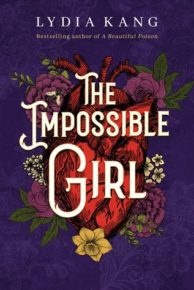 Pitch: A terrific, fascinating and strange historical fiction page-turner about a girl who disguises herself as a fake twin brother to avoid being hunted for a medical quirk. (Also, she robs graves to sell corpses for science.)

Manhattan, 1850. Born out of wedlock to a wealthy socialite and a nameless immigrant, Cora Lee can mingle with the rich just as easily as she can slip unnoticed into the slums and graveyards of the city. As the only female resurrectionist in New York, she’s carved out a niche procuring bodies afflicted with the strangest of anomalies. Anatomists will pay exorbitant sums for such specimens—dissecting and displaying them for the eager public.

Cora’s specialty is not only profitable, it’s a means to keep a finger on the pulse of those searching for her. She’s the girl born with two hearts—a legend among grave robbers and anatomists—sought after as an endangered prize.

Now, as a series of murders unfolds closer and closer to Cora, she can no longer trust those she holds dear, including the young medical student she’s fallen for. Because someone has no intention of waiting for Cora to die a natural death.”

Quick Take: This is a book that you fall into. It sounds a bit bizarre, but the world building and Cora’s perspective are so well drawn that the unusual is normal. It’s also a mystery as people keep dying and Cora is very likely going to be the next victim. It’s almost impossible to figure out whom to trust and what everyone’s motives are. This is fascinating and macabre without being needlessly psychologically dark. There’s hope and strength and optimism in this world of dead bodies and oddities. 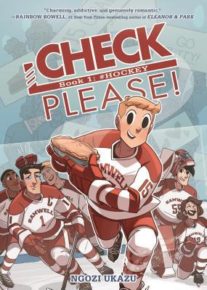 Y’all… I might not be ready for this. I may be a former junior figure skating champion, vlogger extraordinaire, and very talented amateur pâtissier, but being a freshman on the Samwell University hockey team is a whole new challenge. It’s nothing like co-ed club hockey back in Georgia! First of all? There’s checking. And then, there is Jack—our very attractive but moody captain.

A collection of the first half of the megapopular webcomic series of the same name, Check, Please!: #Hockey is the first book of a hilarious and stirring two-volume coming-of-age story about hockey, bros, and trying to find yourself during the best four years of your life.”

Quick Take: It’s great that Check, Please! is a LGBT story that isn’t making a huge drama of being LGBT. Bitty is gay and the team is cool with that. The drama is focused on transitioning to college, making friends, making the playoffs, baking and the inscrutable Jack. Bitty is hopeful, vulnerable and relatable. It’s adorable. 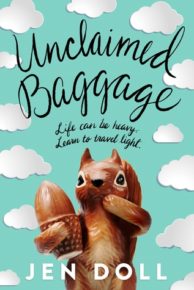 Pitch: Fun premise about a couple of unlikely friends who bond over a summer job.

Story: “Doris—a lone liberal in a conservative small town—has mostly kept to herself since the terrible waterslide incident a few years ago. Nell had to leave behind her best friends, perfect life, and too-good-to-be-true boyfriend in Chicago to move to Alabama. Grant was the star quarterback and epitome of “Mr. Popular” whose drinking problem has all but destroyed his life. What do these three have in common? A summer job working in a store called Unclaimed Baggage cataloging and selling other people’s lost luggage. Together they find that through friendship, they can unpack some of their own emotional baggage and move on into the future.”

Quick Take:  The job itself sounds like so much fun, but the story covers some serious issues (harassment, bullying, alcoholism, racism) for balance. I wished I liked the characters a more since the two girl POVs blended together and the guy isn’t the most sympathetic character. Others readers just looking for a summer read may not be as annoyed.

A Blade So Black by L.L. McKinney 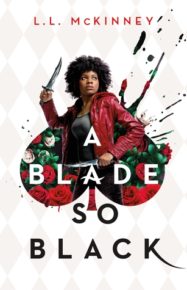 Story: “The first time the Nightmares came, it nearly cost Alice her life. Now she’s trained to battle monstrous creatures in the dark dream realm known as Wonderland with magic weapons and hardcore fighting skills. Yet even warriors have a curfew.

Life in real-world Atlanta isn’t always so simple, as Alice juggles an overprotective mom, a high-maintenance best friend, and a slipping GPA. Keeping the Nightmares at bay is turning into a full-time job. But when Alice’s handsome and mysterious mentor is poisoned, she has to find the antidote by venturing deeper into Wonderland than she’s ever gone before. And she’ll need to use everything she’s learned in both worlds to keep from losing her head . . . literally.”

Quick Take: There’s lots of action, some fun images and lots of little tips of the hat to Alice in Wonderland and Buffy the Vampire Slayer. It’s also great to see a black girl kicking butt. The first chunk of the book is pretty messy as there’s a ton of set up and plot. Elle’s also got a kind of chip on her shoulder about everything which gets a little tiring. So there were lots of little things that bothered me, but they may not bother every reader. Still, there’s an interesting and original story in here and I am curious to see where the next book goes.

Other books of interest: The Caged Queen by Kristen Ciccarelli is a companion novel to one of my favorites last year, The Last Namsara. (Dragons!) Heidi Heilig starts a new series with For a Muse of Fire.  Both authors (along with Ibi Zoboi’s who’s terrific Pride is out now) are on the Epic Reads Meet ups tour so check out the schedule to see if they’re coming to a city hear you.

Thanks to Penguin Teen (Wildcard), Lake Union (The Impossible Girl), First Second (Check, Please!: Hockey), MacMillan (Unclaimed Baggage and A Blade So Black) for providing the books for review. Want more details on my impression of these and other books? Check out my ratings and full reviews at Goodreads. 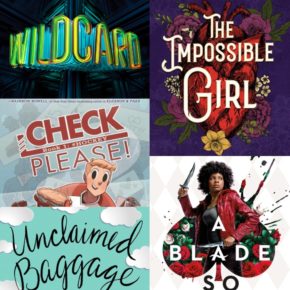