My final event of the year! Last weekend I headed to lovely Charleston for one of the biggest YA book festivals. Lots of books, authors, fans and fun!

Friday is the YALLCrawl which sort of a preview day with a limited number of authors signing and participating in publisher events. This year I attended the Penguin Teen Red Carpet Preview which, yes, had a red carpet, a chat anda singing with 7 of their authors. The seven authors included Sarah Dessen, Renee Ahdieh, Ruta Sepetys, Libba Bray, Jay Asher, Courtney Summers and the host, Brendan Reichs. 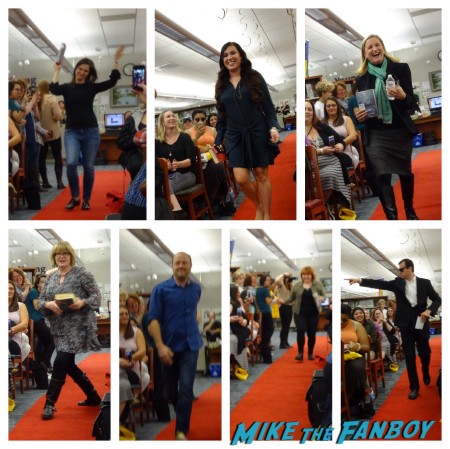 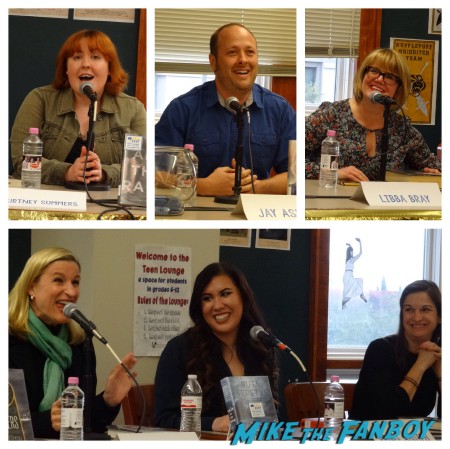 Afterwards, there was a bit of chaos as everyone swooped on the authors for the signing. After a few moments, they sorted out lines.

The next day dawned quite early for me as there were a TON of things happening at the same time and it pays to get into line early. (This is where having clones would be awfully useful.)

I made it to the NOVL coffee hour where several authors were supposed to be handing out coffee, but were really taking pictures and occasionally singing books. Ryan Graudin is one of my main reasons for heading to YALLFest this year so I made sure I got a chance to meet her. Wolf by Wolf is pure genius. (I recently reviewed its sequel, Blood for Blood, so take a look for more info on both books.) Ryan was accompanied by Jennifer E Smith who wrote a short story I really liked so I’m eager to read more from her. 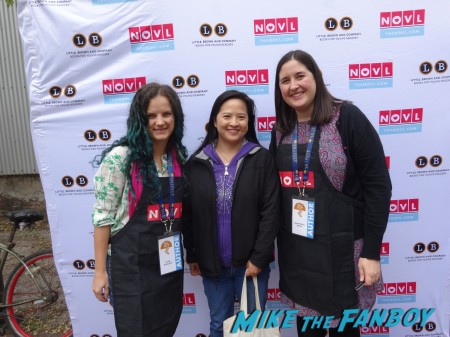 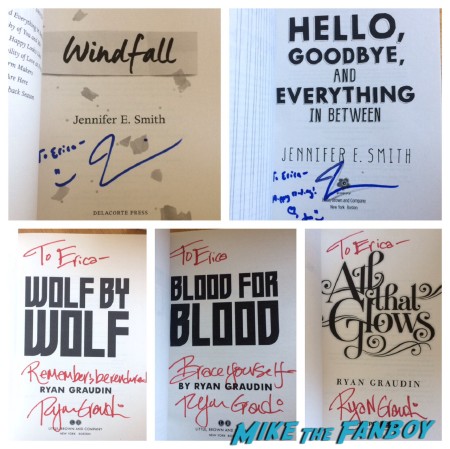 After that, I headed to the First in Line Biscuit Brunch which had a great author line up including Amie Kaufman and Jay Kristoff (Illuminae series — science fiction adventure told through documents, transcripts, drawings, etc…)… 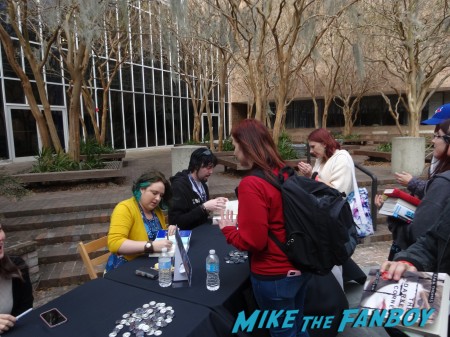 …and National Book Award nominee Nicola Yoon. Her books are so light and beautiful and optimistic and heartfelt. She’s also like that in person!  Read The Sun is Also a Star (a la Before Sunrise which touches on fate, love, racism, immigration and so much more) 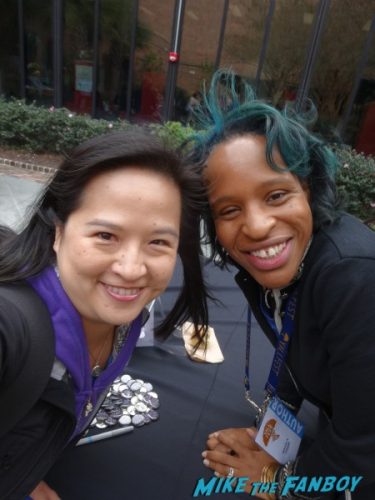 Scholastic also had a breakfast signing at the I Read YA booth with donuts, Daniel Jose Older (Shadowshaper = urban fantasy)… 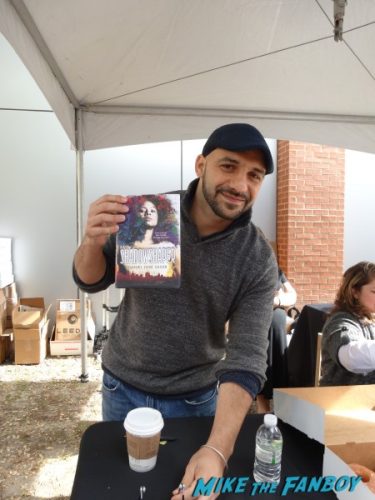 …and Sharon Cameron. She was very outgoing and pulled out a specific Sharpie to sign my book, Rook. I haven’t had a chance to read it yet, but its inspired by The Scarlet Pimpernel so, yes, I’m on it! 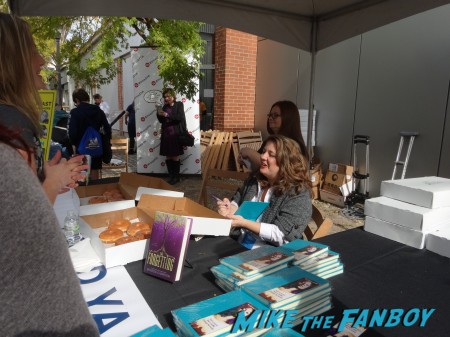 Then I headed to line to wait for Becky Albertalli who is another reason why I made the trip to Charleston this year. Simon vs the Homo Sapiens Agenda is an all-time favorite so I was really happy to get a chance to meet her. If you haven’t read Simon vs yet, it’s a hug, a laugh and a cry…all at the same time. Simon is dealing with a secret admirer while being blackmailed by the class clown/bully who threatens to out him. I can’t wait to read her new book, The Upside of Unrequited, which comes out next year. 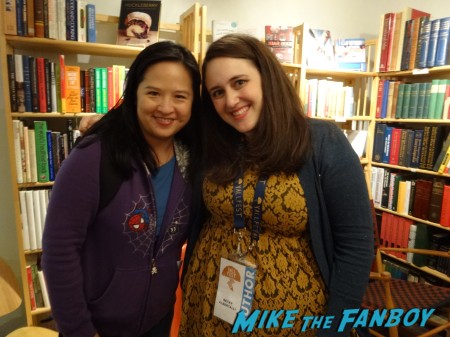 I was also really excited to met SJ Kincaid who wrote one of my favorites of this year, The Diabolic. It’s a science fiction story where an android body guard masquerades as the princess when she’s held as a political hostage. Great stuff. 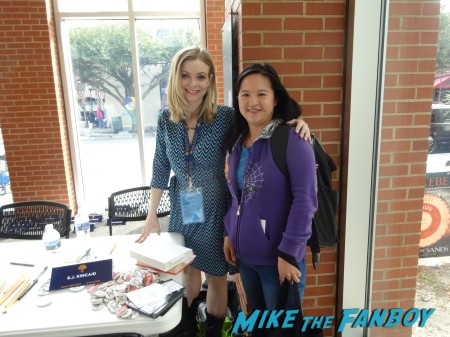 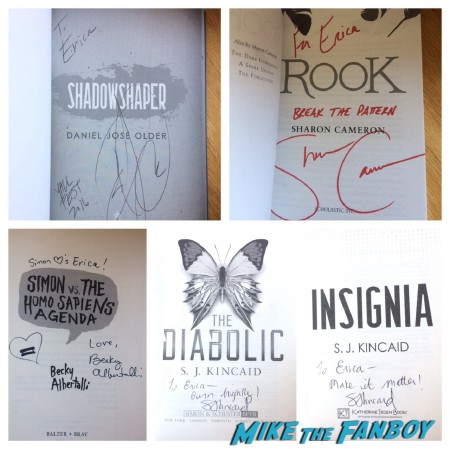 I also met the very friendly and enthusiastic Brandon Kiely who wrote The Last True Love Story and co-authored All American Boys with Jason Reynolds. All American Boys is an amazing book that illuminates both sides of the racial tension in one high school. Brandon’s work-in-progress is a look at misogyny which is sadly, all too timely. (He started it long before this election year.) 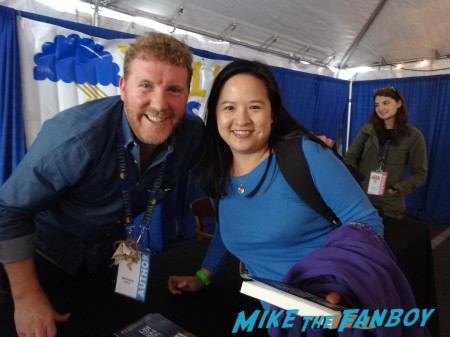 Gwenda Bond was really nice as she signed my copies of Girl on a Wire and the first book in her Lois Lane series, Fallout. We also took an epic Polariod so look on my Twitter feed (@Cambear) if you want a good laugh! 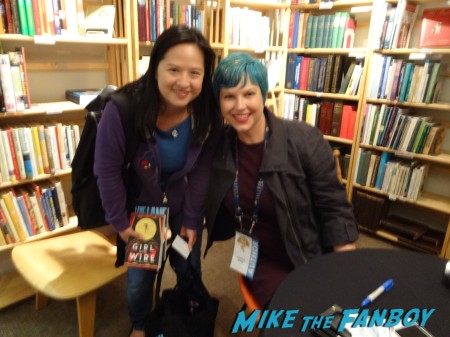 One of the longest waits of the day was for Alexandra Bracken. Thankfully, YALLFest wristbanded her line early this year so really, it wasn’t awful. (Last year was a very, very long wait!) But Alex is always fun and she was giving out advanced copies of Wayfarer, the sequel to her best-seller Passenger (time travel and romance). 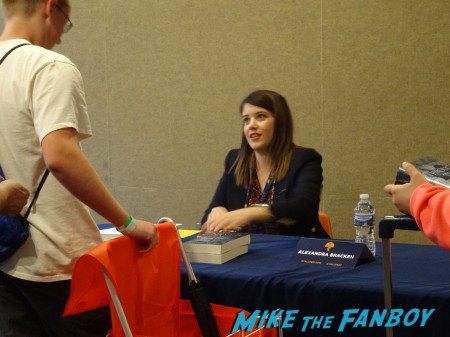 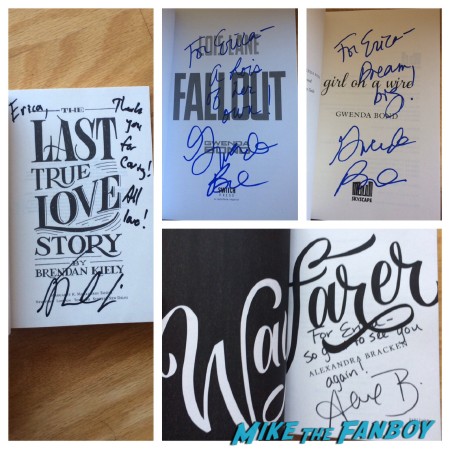 I also caught up with Renee Ahdieh who was signing posters and samplers of her new book, The Fame in the Mist which is a re-telling of Mulan in Feudal Japan. After reading The Wrath and the Dawn (retelling of Arabian Nights), I’ll read anything she writes, but this sounds fantastic! To celebrate, Penguin Teen brought out some mocktails with a barista… 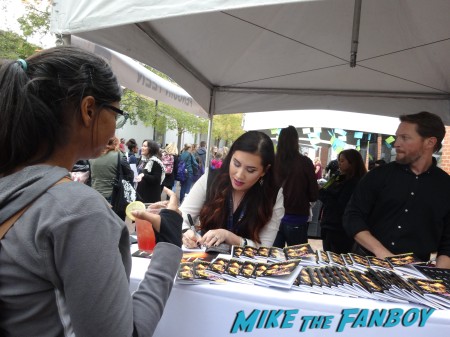 …and an additional helper in Sabaa Tahir, an amazing, best-selling author. An Ember in the Ashes is a must-read series! 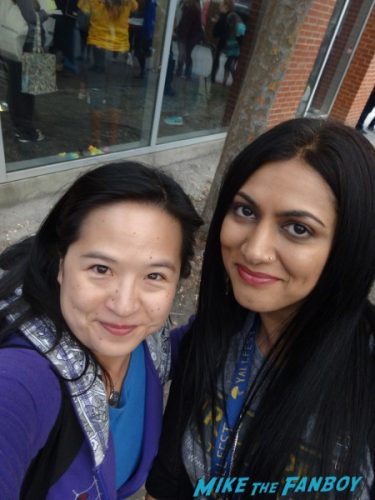 Riveted Lit held a cupcake/trivia contest to cap off the day. Readers joined authors in a trivia contest. Jenny Han was among the authors (LOVE her Lara Jean series!)… 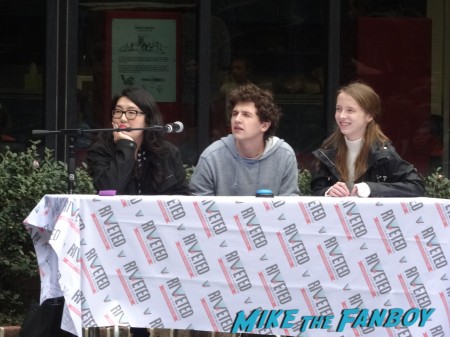 …and the authors behind All American Boys (Jason Reynolds and Brandon Kiely) reunited/played against each other. Lesson learned: people know their Harry Potter trivia. 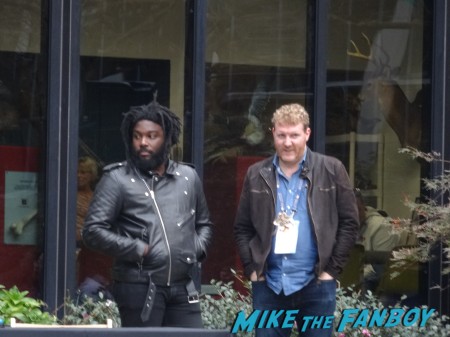 And that was my last event of the day! It was great to see a lot of familiar faces from home, from other events and from last year’s YALLFest! I’ve been to a lot of book events in the past year and YALLFest stands out as particularly cozy as we take over a little corner of the city. Thanks to all the authors, publishers, YALLFest volunteers for the great weekend! 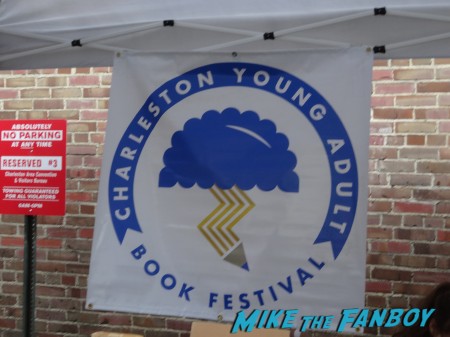 And that’s my trip to Charleston!  Well, not quite! I did managed to nab quite a few books on my most-anticipated list so stay tuned for my YALLFest book haul post!