Looking for your next great read? Chicago hosted Book Expo America (BEA), the biggest publishing industry event in the US. Publishers bring several hundred authors to talk and promote their upcoming books. It’s all a little heady since there are so many great books coming up, but here’s my list of some of the buzziest books to add to your TBR list!

While I read mostly YA, I like to jump around genres and I also like to toss in some adult and middle grade books for variety. Some people are more particular about the types of books they read so I’ve lumped these books into some rough categories.

These are stories about (more or less) normal people. These books represent a wide array of characters from a diverse list of writers proving that there is such a thing as YA lit. 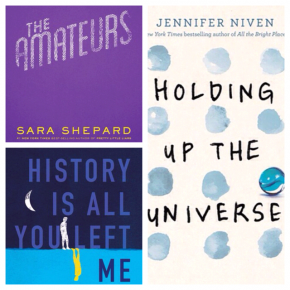 Amateurs by Sara Shepherd – A group of girls with a passion for true crime stories start to dig into a murder investigation. This book is published by FreeForm, a new imprint linked to the newly re-named network. Odds are good Sara Shepard (Pretty Little Liars, The Lying Game) will have yet another TV series based off her books! (November 1)

History is All You Left Me by Adam Silvera – Griffin lost his first love, Theo, and forges a friendship with Theo’s ex-boyfriend. (January 17)

Holding up the Universe by Jennifer Niven – A heart-wrenching story about what it means to see someone and love someone for who they truly are. Kudos here for having a main character who isn’t a perfect size 2. (October 4) 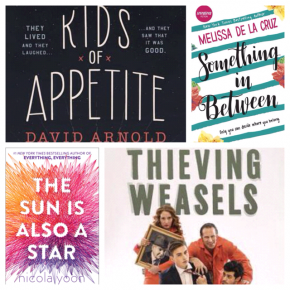 Kids of Appetite by David Arnold – A tragicomedy about first love and devastating loss from the author of Mosquitoland. (September 20)

Something in Between by Melissa de la Cruz – This book is the first from a new imprint, Seventeen (as in the magazine) and they’ve chosen a diverse subject. (Yeah!) Jasmine is a model student with a bright future when she learns that she and her family are illegal immigrants. (September 27)

The Sun is Also a Star by Nicola Yoon – A pair of straight-laced students fall in love at first sight and are then separated. Her debut Everything, Everything was beautiful and cute so I can’t wait for this one! (November 1)

Thieving Weasels by Billy Taylor – From one of BEA’s Buzz authors, this is about a kid who’s dragged into a con, but doesn’t know the con’s on him. (August 23)

Historic fiction/fantasy is one of my favorite genres, but there aren’t quite as many titles as other genres.  Most of these are second books in a series so definitely start with the first book which sets up these worlds with a twist! 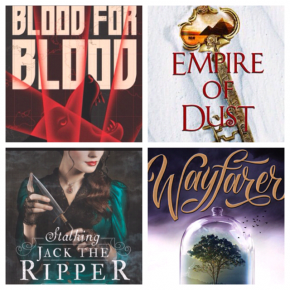 Empire of Dust by Eleanor Herman – The second book in a series about the rise of Alexander the Great with a twist of magic. Multiple characters, great details about the era, it’s an epic about a time period that doesn’t get a lot of attention. (June 28)

Stalking Jack the Ripper by Kerri Maniscalco – A part of James Patterson’s new children’s imprint, Jimmy, Audrey uses forensic medicine to catch a serial killer. It’s nice to see some girl power in a time where there really wasn’t any. Kerri is also a BEA buzz author(September 20)

Wayfarer by Alexandra Bracken – The sequel to the best-selling Passenger, this continues time-traveler Etta’s story as she fights to be united with Nicholas. (January 3)

These books take place in what’s recognizably our world, but with a twist of something extra. 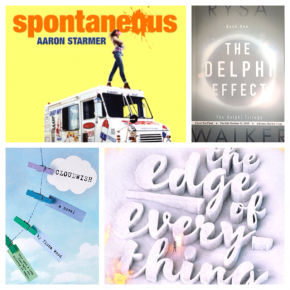 Cloudwish by Fiona Wood – A girl’s daydreams start coming true so is it real love or just a well-timed wish? (October 18)

The Delphi Effect by Rysa Walker – This is the story of a teen whose touch accidentally picks up conversations with ghosts. She becomes the center of a government conspiracy in this start to a new series. (October 11)

The Edge of Everything by Jeff Giles – When their worlds collide, teenager Zoe and X, a bounty hunter from Hell, grapple with the ultimate sacrifice in this star-crossed romance by Entertainment Weekly veteran Jeff Giles. (January)

Spontaneous by Aaron Starmer – Another BEA buzz author, this book is about friendship and goodbyes when students start to spontaneous combust at a high school. (August 30)

The most prolific YA genre, these books do not take place in our world so be prepared for lots of big ideas and magic. 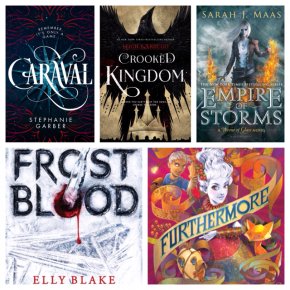 Caraval by Stephanie Garber – There’s lots of buzz around this romantic fantasy debut from a BEA buzz author. The description is pretty broad with a mythical performance called Caraval, an arranged marriage, a kidnapping, romance and more. (January 10)

Crooked Kingdom by Leigh Bardugo – The sequel to the best-selling Six of Crows where Kaz and the crew battle to decide the fate of magic. (September 27)

Empire of Storms by Sarah J. Maas – The latest book in the beloved Throne of Glass series. Enough said. (September 6)

Frostblood by Elly Blake – Ruby is a fireblood with the power of heat and flame in a world where the frostbloods rule. She falls for a frostblood, gets captured and is forced to fight for sport. (January 17)

Furthermore by Tahereh Mafi – A new middle grade adventure where color is currency, adventure is inevitable, and friendship is found in the most unexpected places. (August 30) 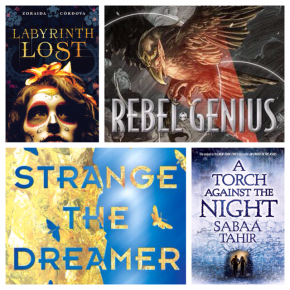 Labyrinth Lost by Zoraida Cordova – Alex hates magic even though she’s a bruja (witch). Yes! A Latina main character! When Alex tries to get rid of her powers, her family vanishes so she embarks on a strange and twisted journey to get them back. (September 6)

Rebel Genius by Michael Dante DiMartino – Rebel Genius is the debut novel from the co-creator of Avatar: The Last Airbender and The Legend of Korra. This middle grade book is about a world where artists hide their abilities and their Genius, the bird-like embodiment of their creative spirit. (October 4)

Strange the Dreamer by Laini Taylor – A new series from the author of The Daughter of Smoke and Bone trilogy, this book launches an epic, new fantasy series. (September 27)

A Torch Against the Night by Sabaa Tahir – The highly anticipated sequel to last year’s An Ember in the Ashes. This story takes readers into the heart of the Empire as Laia and Elias fight their way north to liberate Laias brother from the horrors of Kauf Prison. (August 30)

There aren’t quite as many science fiction/dystopian titles as there were a few years ago. There are some big-concept books and some major authors debuting new series this year. 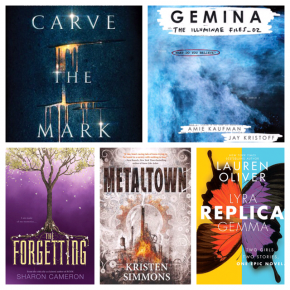 Carve the Mark by Veronica Roth – In her first work since the Divergent series, this space opera features a world where people are divided by talents. Akos and Cyra have vulnerable talents, but fate throws them together where they can help or kill each other. (January 17)

The Diabolic by SJ Kincaid – Nemesis is a humanoid created to protect a senator’s daughter, even if she has to impersonate her on a very precarious mission. (November 1)

The Forgetting by Sharon Cameron – A middle grade book which features a society that loses its collective memory every 12 years, but one girl remembers everything. (September 13)

Gemina by Aimee Kristoff and Jay Kauffman – The sequel to the highly successful Illuminae, this found documents story is about Hanna and Nik and an assault on a Jump Station. (October 18)

Metaltown by Kristin Simmons – Pitched as Newsies meets The Jungle, this is a stand-alone novel from the author of Article 5 and The Glass Arrow. (September 20)

Replica by Lauren Oliver – Gemma wants to know what’s in her father’s top secret research facility and Lyra is one of its test subjects. Read the story through Gemma’s eyes first or Lyra’s eyes or alternate according to chapter numbers. Two girls, two stories, three ways to read it. (October 4)

Fairy tales are always popular and writers love to put their own spin on beloved tales. 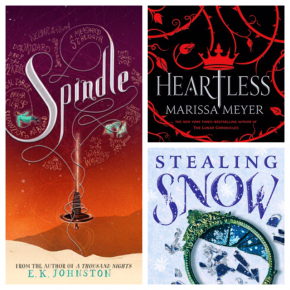 Heartless by Marissa Meyer – After completing her wildly successful Lunar Chronicles (more or less – the story continues in January in comic book form), this is a stand-alone prequel for Alice in Wonderland with the backstory of the Queen of Hearts. (November 8)

Spindle by E.K. Johnston – A spin on Sleeping Beauty, Spindle takes place in the same world as A Thousand Nights, EK Johnston’s take on Arabian Nights.(You don’t need to read A Thousand Nights, but Spindle may spoil a few things if you read it first.) In Spindle, a princess and exiles work together to overthrow the demon. (December 6)

Stealing Snow by Danielle Paige – From the author of Dorothy Must Die, Stealing Snow is a twist on The Snow Queen, telling the story of how Snow becomes a villain, a queen, and ultimately a hero. (September 20)

Among adult titles, I have a few contemporaries and thrillers to look forward to! 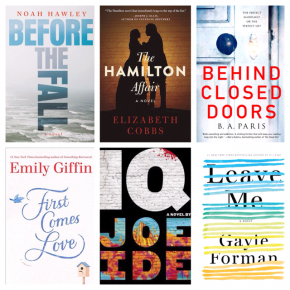 Before the Fall by Noah Hawley – The brain behind the superb Fargo TV series has a new thriller about life after a private plane crash. Was it just coincidence that these particular people were on board or was there something more? (May 31)

Behind Closed Doors by BA Paris – Touted as the next The Girl on the Train, this thriller is about what’s behind the seemingly perfect marriage between Jack and Grace. (August 9)

First Comes Love by Emily Griffin – Emily Giffin’s latest introduces a pair of sisters who find themselves at a crossroads. (June 28)

The Hamilton Affair by Elizabeth Cobbs – Not throwing away their shot, this novel is about the courtship between Alexander Hamilton and Elizabeth Schuyler. (August 2)

IQ by Joe Ide – A mystery thriller featuring an Asian-American genius who works with the LAPD. This debut novel was inspired by the author’s life-long love of Sherlock Holmes. (October 18)

Leave Me by Gayle Forman – Gayle Forman’s first adult novel is about finding home again and facing your fears. (September 6)

I love movies and TV so there are a few related titles that I’m looking forward to as well! 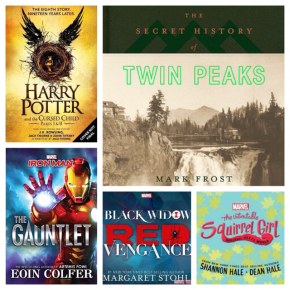 Iron Man: The Gauntlet by Eion Colfer – A story about the billionaire, genius, philanthropist, playboy from the writer of the Artemis Fowl series? Yes please! This Iron Man adventure is aimed at middle grade readers. (October 25)

Harry Potter and the Cursed Child by JK Rowling, Jack Thorne and John Tiffany – This is the script for the play (not a novel). The story takes place roughly 20 years after Harry Potter and the Deathly Hollows. Tickets are nearly impossible to nab so this will be the next best thing. (July 31)

The Secret Life of Twin Peaks by Mark Frost – This book will lead-into the long-awaited new season which will air on Showtime sometime next year. Written by the show’s co-creator Mark Frost, the book is (no surprise) embargoed until October 18.

The Unbeatable Squirrel Girl: Squirrel Meets World by Shannon and Dean Hale – While she may not be as well-known as other Marvel superheroes, Squirrel Girl is a popular character with a very well-received comic line. She’s beat Thanos and Wolverine so she kicks butt, right? This is her story way before those battles. (February)

So there’s something for everyone coming up! Remember that a lot of these covers aren’t final so the final versions may look quite different. What books sound most interesting to you? Comment below and you may see the most popular books popping up in a huge giveaway I have planned! Stay tuned for my look at the craziness of Book Con, an event for readers.