Home / Conventions / Boston Comic Con News! The Con Will Go On! But Cosplayers Leave Those Guns And Weapons At Home! #smartidea

For those of you dealing with all the chaos in Boston this week, first off our hearts go out to anyone affected by this tragedy.

Man oh man… What’s going on with this world! Seriously?

I hope everyone out there in the world is hanging in there and especially those of you in Boston make sure you take care of yourself.

The Boston Comic Con has released this statement…

Boston Comic Con is happy to announce that the convention will go on this weekend as scheduled! We hope to stand as an example of the resilience of Bostonians in the wake of this horrific tragedy. The many statements of solidarity we have received from fans and guests alike have been very encouraging. We will be donating a portion of the art auction proceeds to the Red Cross for the Boston Marathon victims relief effort. In light of the heightened security in the city we ask cosplayers to not bring prop weapons this weekend.

So guys, if you are going, make sure and leave the faux guns and weapons at home. I think it’s a smart idea for sure! 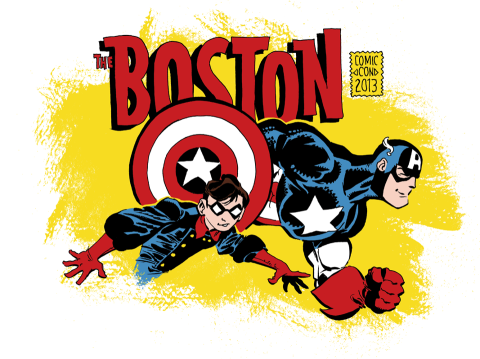