I feel like I should bust out into song! “It’s the Box Office Breakdown!” This week Suddenly Susan continues her prediction streak and talks about how much cash Insidious 2 made!

Check out the full BBO after the jump!

For the third week in a row, I’ve correctly predicted the number one movie, Insidious 2. But I would never have guessed just how much it would pull in – a whopping $41 million! We’ll have to wait until next week to see if it has any staying power.

The dark comedy The Family came in second place taking in $14.5 million, just a third of the gross of the number one movie.

Riddick fell blindly into the number three spot with just $7 million, a fraction of last week’s number one gross.

Lee Daniel’s The Butler is still cleaning up at the box office, adding another $5.5 million to its $100 million domestic total.

Not to be outdone is the comedy We’re the Millers. After six weeks in release, it’s the number five movie with a total domestic gross of $132 million. Looks like Jennifer Aniston’s fans really will be there for her. 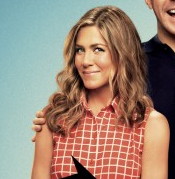 Word of mouth has the foreign gem Instructions Not Included enjoying a third week in the top ten at number six taking in $4.2 million.

Disney’s Planes won’t be grounded anytime soon. It came in at the number seven spot adding $3 million to its $83 million domestic gross.

One Direction: This is Us added $2.4 to its total domestic gross of $27 million. Not bad for a documentary that cost a mere $10 million.

Matt Damon’s sci-fi thriller Elysium hung in at the number nine spot with another $2 million.

Percy Jackson Sea of Monsters rounded out the top ten after six weeks in release taking in $1.8 million.

Next week I’m predicting Insidious Chapter 2 will remain in the number one spot, with my boy Hugh Jackman at number two with his psychological thriller Prisoners. Tune in to see if I’m right!