Really, there’s no more iconic symbol of the 1980s than Boy George and Culture Club. He had so many hits in the 1980s it’s really hard to count them all, It’s a Miracle, Karma Chameleon, etc… If you really start to count them all, I think you would be shocked at home many songs you can count.

Paul went out, to meet the notoriously finicky star of Culture Club. Check out his full recap below!

Growing up in the 80’s there were no-bigger names in the music world than Boy George. So I was set out to meet the man at his outdoor concert event and glad I did! Upon arriving nothing but friendly faces, which is always nice, about 15 of them. Even the paps wanted autographs! nice! Yet where was mike the fanboy????

(Editor’s Note: Mike The Fanboy was sick and hanging out with Theo! 😉 M-)

Anyways it was extremely hot that day (95+) but coffee bean was a big help to all of us.
Boy arrives by being pulled up with some tourist tailgating him through the alley (why is this spot so popular to drivers) and the guy ruins all the pap entrance shots which is horrible for everyone. Boy George did wave which is a good sign and shortly he goes to the stage with his band which is at least 6-10 people and he is wearing a pink hat which makes for easy spotting. They go through the usual 2 song, 3 times rehearsal which sounds good.

He then departs and turns to us in our crying out for him and walks over and sternly says he isn’t “gonna sign a million things.” 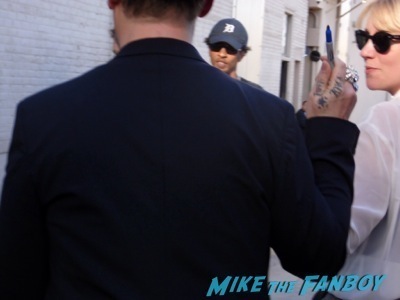 He then goes down the row and signs one each but he’s signing culture club stuff too which rumor had it he was refusing to for the longest time and according to a certain dvd collector he didn’t sign at the Mayan theater show the night before. As soon as I notice this I had my pal (yes this was prearranged I still owe her lunch) next to me get an lp of coulor by numbers and he goes “gah a relic for me to sign!” 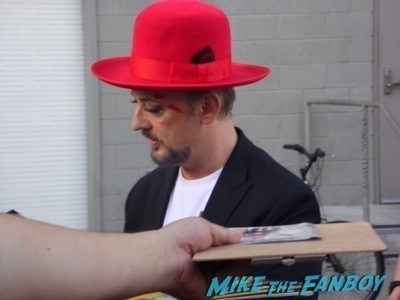 There he is right in front of me I spout at him “here’s another relic for you, btw you look and sound fantastic” that got a smile see photo below as he signed kissing to be clever. 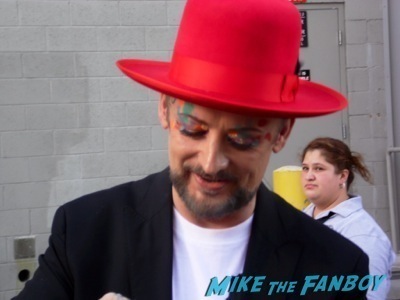 He then preceded to go inside I then looked for a spot to watch the concert but decided against doing it when the heat started to get me, so I called it a successful night. 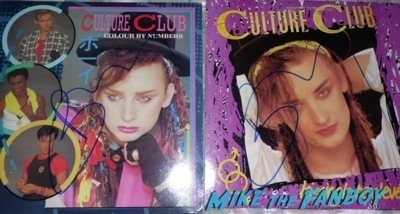