I have to tell you, I loved Walt Disney’s Brave. I thought that Kelly Macdonald was awesome as the title character and Julie Walters was really good as The Witch as well.

Disney has a great history of fine animated films and this definetly fits in with the rest of Walt Disney’s cannon of classics! I think I’m going to have to coin that phrase, “Walt Disney’s Cannon of Classics!”

Check out Scott’s review of Brave below!

I should start my review by saying this; I loved Disney/Pixar’s “Brave”. From the fairytale story and sweeping Scottish landscapes so brilliantly captured to the red headed firecracker at the heart of the story. I was sucked in.

“Brave” is about family, and not the typical dysfunctional Disney family but a loving, nurturing and functional family unit that rarely shows up in Disney films of past. This is one of the greatest strengths of the movie. This is where the film truly succeeds. At the heart of the family is Merida (voiced by Kelly MacDonald). Merida is a Scottish princess who longs to be an archer. She yearns for adventure and for the chance to live outside of the constraints of being a “princess” and all that entails. She rebels against the expectations put upon her by her family and her clan. She turns up her nose to the thought of marriage. Merida is strong and opinionated, she is a 21st century Disney princess.

The movies adventure is that of a curse put upon Merida’s clan by a witch of the woods. The curse turns Merida’s mother, the Queen, into a giant bear. The curse will only be broken if Merida can solve a riddle and reunite her family. For me- the adventure isn’t’ nearly as interesting as the characters in the film. Emma Thompson’s Queen Elinor, the diplomatic queen of Durnbroch and Merida’s mother… Billy Connolly’s boisterous King Fergus, the father we all wish we had. The devilish triplet brothers: Harris, Hubert, and Hamish. Together they all form a warm and loving heart to a sweeping grand Disney story. All of them are such interesting and well rounded characters and should join the ranks of fine Disney supporting players. Not an easy feat in this day and age! 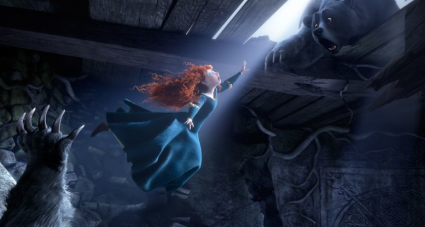 The animation is stunning… I don’t think that there is a finer way to watch animated films than on Blu-Ray. It sparkles and pops so beautifully, you almost want to dive into the screen. Every movement, every sweeping landscape… It’s captured so brilliantly you would think that it’s real. In fact, I found myself saying, “I really need to visit Scottland” forgetting that this is an animated film.

The problem with Disney/Pixar’s “Brave” isn’t in the movie itself, but in the pedigree of Pixar that proceeds the film. “Brave” is a fine movie and by far the best animated film of 2012 (Tim Burton’s Frankenweenie is a close second best). Unfortunately for “Brave” it will be compared to other stronger films that Pixar has created. “Brave” is no “Up” or “Toy Story 3”. “Brave” is a big movie in contrast, with sweeping scenery and larger than life characters. It is a fairy tale full of adventure, spirit, and heroics. It has all of the elements needed to rank amongst the Pixar classics, but falls just short of the “Finding Nemo”‘s and “The Incredibles” of Pixar past.

The blu-ray has some great bonus features as well. This is one time that the audio commentary is worth listening to! Plus, the alternate opening is a great way to see how the process of making an animated feature is just like making a regular live action movie.

Also of note is the original short The Legend of Mor’du, which explores the history of Mor’du and is worth checking out.

“Brave” is available on Disney DVD, BluRay and 3-D. The film is gorgeous to watch and translates well to the small screen. It’s a warm, funny story that is beautifully told with heart and honesty. 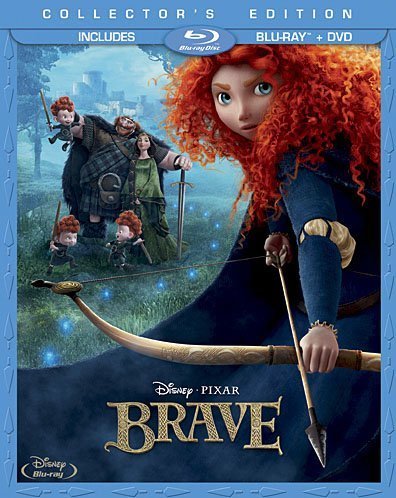