It’s Spooky Sunday! DVD Dave headed out to meet some icons of the horror world, Jennifer Tilly, Brad Dourif and more from the iconic Child’s Play series. Who doesn’t love Chucky? I mean, he’s a pint sized killer with a great put down… Some quite literally.

Check out DVD Dave’s awesome recap about meeting the cast of Bride of Chucky below!

Hi guys!  You already know I love horror films and I jumped at the chance to get “Child’s Play” actor Brad Dourif to sign my DVDs recently.  Would you believe I forgot not one but TWO Child’s Play movies signed?!?  When would I ever get Brad again?  Prior to this he hadn’t made any major public appearance since the last L.A. Weekend of Horrors (and he wasn’t even allowed to sign there even though he willing…Boo to Creation!)

So imagine when I find out that Brad would be out again soon.  Now imagine being told that info by Alexis Arquette!  Ms. Arquette was at an event with all her siblings (yes, ALL…Rosanna, Patricia, and David) and when I asked her to sign my “Bride of Chucky” DVD she was thrilled.  She asked if I was going to the upcoming screening of that movie and said she was going to be there along with Brad, writer Don Mancini and, wait for it…Jennifer Tilly!

I was going to be there for sure now!

So the event ends up being put on by Screamfest at a small theatre in Glendale.  My friend Devon and I show up early and it looks very good.  Most people who show up are regular fans and hardly any other occupational graphers.  We make sure to be first inside theatre to score best seats.  Man, this theatre is awesome!  Reclining seats and the ticket price included 2 beers!  Screamfest even went to the trouble of passing out a slip for a drinking game to use during the screening.  This is great!!! 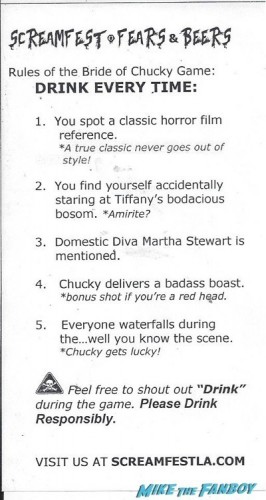 It’s pretty close to showtime and still no one from the film.  We are starting to get antsy.

Suddenly, Tilly shows up.  I have to tell you that if you ever…EVER…get a chance to meet her you must do so!  She is one of the sweetest celebrities out there (not to mention sexiest!)  She signed EVERYTHING for EVERYONE.  Switching pens.  She even made sure that anyone who wanted a photo opp got one.  Who the hell WOULDN’T want a photo opp?!?  Yes, I DO love me some Jennifer Tilly!  God bless her!  Sigh… 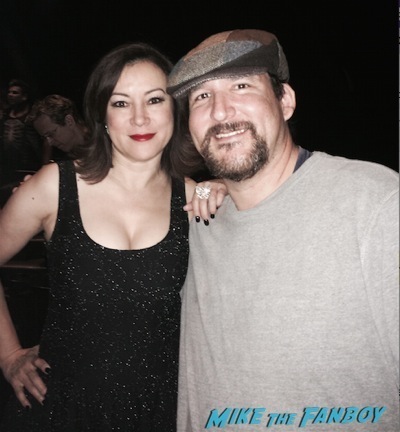 Oh yeah, so anyway, still no Brad!  After the Tilly Lovefest we settled into our seats and waited.  We found out Brad showed up and went out to try for a couple of exclusive graphs…unbeknowst to the general audience.  Brad was kind enough to sign a couple but was in a rush since the movie had already started.  He wasn’t sure where to go, so I escorted him to the theatre.This is going very well!

The movie was great.  It still holds up!  After the film ended, the evening’s emcee introduced Brad, Jennifer and Alexis.  Don was unable to make it due to a family emergency and sent his regrets.  Most of the questions were decent, however one audience member had the nerve to ask Jennifer if “her babies are natural”.  Ms. Tilly took it all in stride and responded in the affirmative.  Alexis chimed in by adding “So are MINE!”  You gotta love Alexis!  Brad discussed how “Bride” is his favorite of the Chucky films saying it was so much fun to have someone in the vocal booth at the same time to collaborate with.  He even added that he asked “Why didn’t I get a girlfriend sooner?!?” 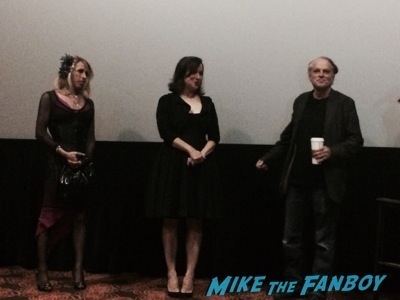 When the Q&A wrapped, no one rushed off.  Everyone stayed and greeted the fans.  You could tell they really enjoyed being there.  Brad deserves a medal for all the autographs he signed and photo opps he took!  He did get a bit upset when a dealer kept handing him blanks to sign.  “How many is this now??”  But for everyone else he was happy to sign any memorabilia and it ran the gamut.  From dolls and masks to posters and guitar pickguards.  Devon even had Brad sign a replica knife that came with his Chucky doll! 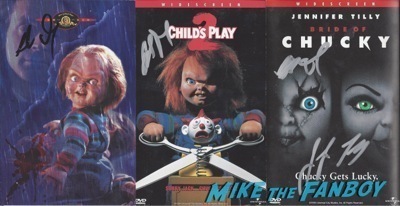 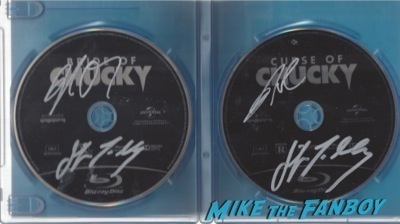 Spotting Alexis sitting nearby, I went up to her and thanked her for letting me know about the evening’s event.  She was thrilled when I asked her to sign “Sometimes They Come Back Again” and my homemade homage to her character from “The Wedding Singer”. 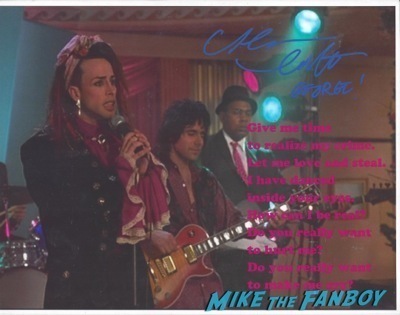 We were ready to leave.  Satisfied with how enjoyable the evening had been when we realized there might be an opportunity for a photo opp with both Brad AND Jennifer!  This was probably a once in a lifetime chance, so we asked and they obliged. 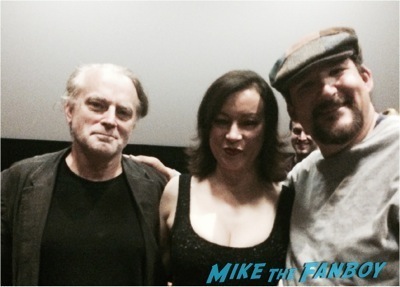 It is so great seeing Brad making more appearances.  The horror community loves him and Jennifer.  Hopefully, Don Mancini will be able to realize that the sequel to the excellent “Curse of Chucky” is greenlit and ready to start filming soon!  So until next till remember, if you ever get a chance to meet celebrities in person, it’s better to be OVERprepared instead of UNDERprepared!  Trust me on this one! 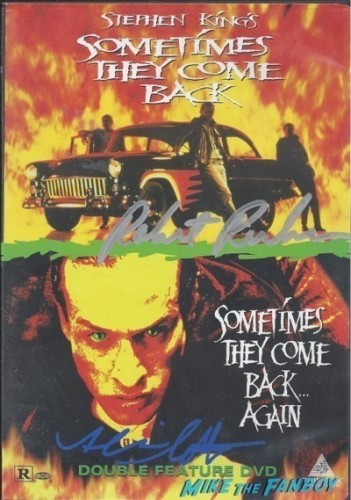 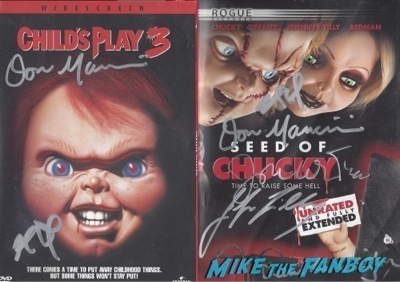 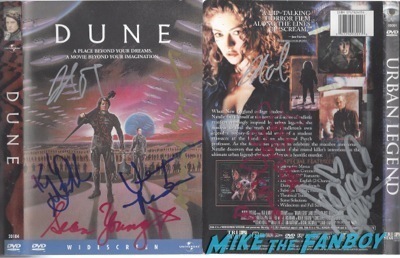 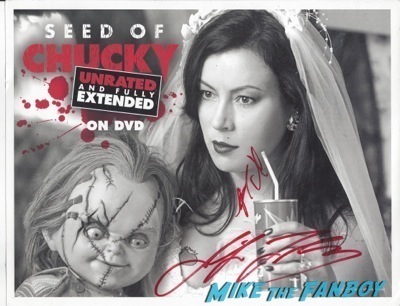 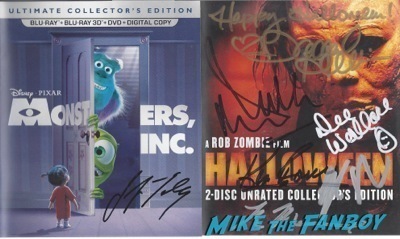 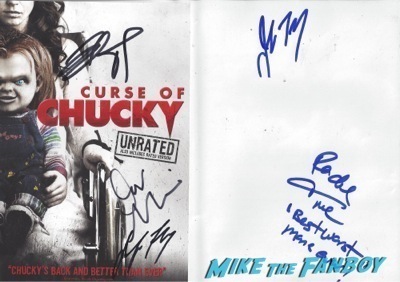 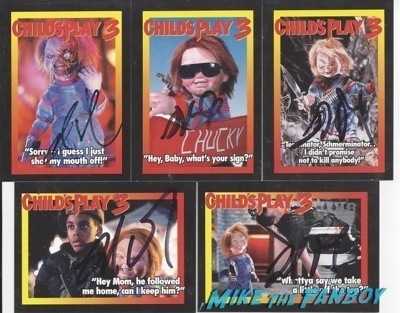