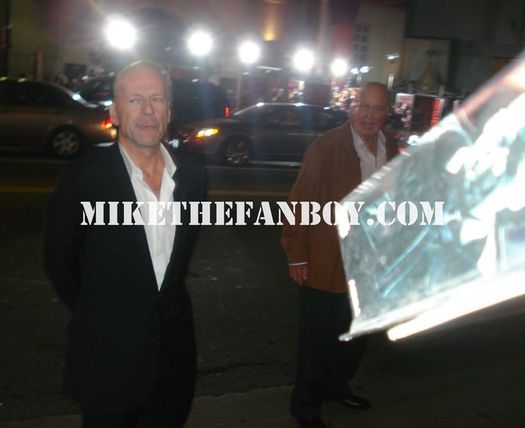 Did I ever mention how much I love Ms. Mary Louis Parker? I have loved her for years, way before Weeds, before Boys on the Side; I’m talking like Bullets over Broadway love… Back in the day love… Of course Weeds is one of my favorite shows ever, God bless Showtime… Anyway, so I’m off today to try and get Ms. Mary Louise Parker on some Weeds items, and also… oh yeah… This is the Red premiere and Mr. Bruce Willis is here too… lol… I’ve always wanted to get Bruce Willis on my Die Hard poster as well so hopefully this will be a good night…

4:45 p.m. – I got my spot I have my posters… I am set… God I hope this isn’t a bust. The cast has so much promise, but Morgan Freeman isn’t nice at all, so I didn’t even bother bringing anything for him. But Bruce Willis is a possibility, and Mary Louise Parker is super nice. So, God willing they will both come over.

5:06 p.m. – It’s a nice night, so honestly, it’s not too bad. Also, the barricade itself is on the street so there’s less of a chance it will fall… so that’s always a plus I would hate to kill an action adventure legend.

5:11 p.m. – The crowd is starting to fill up, but the sucky thing is… is sucky a word… ah never mind. Anyway, the sucky thing is, they didn’t block any of the street off, so it might be tough getting people over. 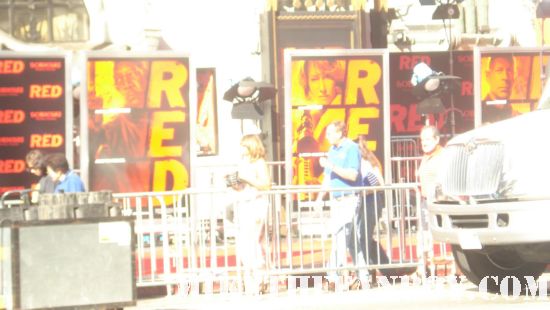 < 5:36 p.m. – Oh, the press is filing into the pen… It’s almost time… 5:47 p.m. – It is so hard to see what’s going on, some people have arrived but I think that they are just producers. 5:55 p.m. – Oh, there’s John Malkovich… everyone is calling out for him… Oh… Oh… 5:56 p.m. – It looks like he wants to come over but he’s kind of waffling back and forth. 5:58 p.m. – Dammit John Malkovich is heading onto the carpet. Dammit… This sucks; I really thought John Malkovich would come over… sigh… 6:02 p.m. – Oh, There’s Morgan Freeman. It’s funny; the crowd barely even calls him over. There are a few small cheers for him, but everyone knows how unfriendly he is so no one even bothers. That’s kind of sad actually. Ah well… 6:07 p.m. – So far no Ms. Mary Louise Parker… Sigh… That sucks… 6:11 p.m. – Helen Mirren’s husband just showed up. He’s holding a cardboard cut out of Helen Mirren. Well, I guess we can surmise she’s not coming tonight. LOL… Ah well… 6:13 p.m. – Someone said they think they see Mary Louise Parker is already on the carpet but that’s not her… as far as I can tell… 6:15 p.m. – Now, Karl Urban has arrived. He’s the one everyone thinks will come over. Karl Urban is generally speaking a really good signer. Everyone calls out for him, but all we get is a wave. Dammit… Wow, you know this is a bad premiere when Karl Urban doesn’t cross. It’s a sad sad day… 6:21 p.m. – Oh crap… What the frak! Ms. Mary Louise Parker is on the carpet… how did I, of all people miss her. I was looking for her the entire time, and no one even saw her and now she’s on the carpet. FRAK, FRAK, FRAK! Sigh… FRAK, FRAK, FRAK, FRAK! 6:35 p.m. – Every car that comes by people thinks it’s Bruce Willis. I think he’ll do it. It’s his movie and of all people he should at least cross and sign some stuff for fans right? 6:39 p.m. – Oh another car. It’s Rumor Willis… So, Bruce Willis should be right around the corner. I mean how did I miss Mary Louise Parker… Really, how did I miss her! 6:46 p.m. – There he is… John McClaine himself… Mr. Bruce Willis. Everyone is going crazy for him… he’s… he’s… Yes, he’s coming over. Finally, something good happens at this premiere. He’s walking right over, and… doing nothing… Everyone is holding out their photos, posters, etc… and he is just standing there… 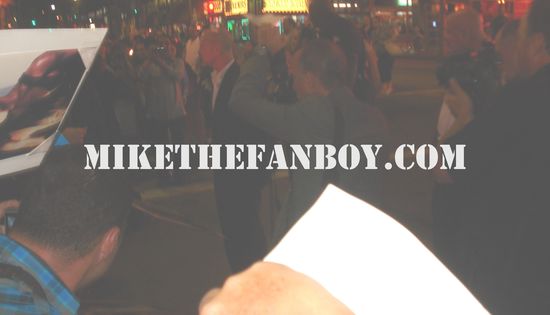 6:48 p.m. – Bruce Willis, is and just bear with me here… He’s just standing there… He’s mumbling to himself… I can see his mouth moving. He’s fucking counting… “1-2-3-4-5” Then he takes ten steps and counts again, “1-2-3-4-5.” Oh, I get it. This is for us, the little people to take a picture of the almighty Bruce Willis. What medieval duckweed! To quote Bill from Bill and Ted’s Excellent Adventure. I mean really, over my many years, I have seen a lot of crap, but this… this is just shitty. It’s shitty to people on the barricade, it’s shitty for the fans, I would rather this jackass wouldn’t have even come over. He’s not even being nice. He looks like a total prick standing there annoyed. I have never seen shit like this. I’ve head of it happening with Drew Barrymore and Jamie Lee Curtis, but never seen it with my own two eyes. I don’t think I’ve been this pissed… Since… Since the last Bruce Willis premiere… This man, Bruce Willis is a total dick. He cares nothing for his fans or the people that have made his career. Yeah, I’m pissed. What a waste. 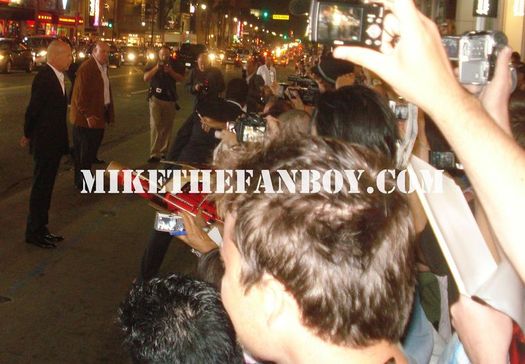 6:59 p.m. – Oh, the almighty Bruce Willis is back on the carpet. Thank you for allowing us to take a picture of you Bruce Willis. Jackass.

7:15 p.m. – I’m running around to the side. I have a feeling Ms. Mary Louise Parker is not going to watch the movie. I know she doesn’t watch herself and I think she’s going to take off. I just have to cross the street to get to the other side of the barricade…

7:21 p.m. – I see her getting into the car. Maybe I can catch her at the light… Oh God, I’m really stretching it now right. After the dickwad behavior Bruce Willis exhibited, I’m grasping at straws.