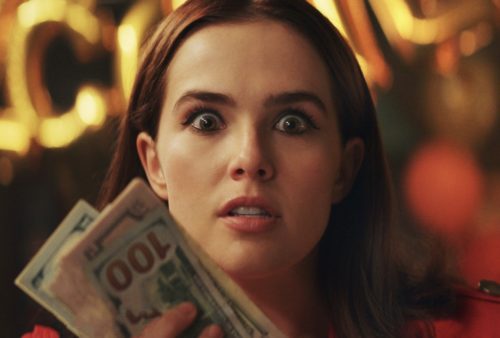 Hollywood’s best kept secret, Zoey Deutch, lights up the screen in one of the year’s best surprises with “Buffaloed.” Deutch demonstrates why she’s quickly becoming the next best thing.

Twentysomething Peg Dahl (Deutch) has always dreamed big and been ambitious. Every year she’s become even more determined not allowing circumstances to dictate her future. Instead of running a lemonade stand as a child, she would repackage 10-cent Buffalo wings and present them as “homemade” nearly tripling her profit to unsuspecting individuals. Peg’s drive led her to more sophisticated scams like selling cigarettes in high school before eventually selling forged scalped Buffalo Bills tickets to pay for her Ivy League education.

Unfortunately, luck runs out for Peg and she is busted for her ticket scam spending 40 months in jail. However, Peg quickly learns the inside hustle of wheeling and dealing contraband, eventually building her own empire smuggling in yogurt. Upon release, Peg and her family are relentlessly hassled by debt collectors thanks to her tickets scam at home, on her cell and even at her brother’s bar where she works. Feeling frustrated, Peg humors one collector and becomes intrigued realizing debt collecting might be better suited for her skillset. Soon Peg finds herself in the competitive world of debt collecting, but her new boss Wizz (Jai Courtney) takes complete advantage of her skills despite dominating the competition. Feeling completely taken advantaged of Peg sets out on her own and wants to leave her own mark in Buffalo.

“Buffaloed” is Zoey Deutch’s coming out party. Much like Parker Posey and Laura Dern in the 90s, it seems like Zoey is popping up in everything and always knows how to steal a scene. Deutch demonstrates an awesome and eclectic repitoire of balancing comedy with drama whether It’s in indies or mainstream movies. She’s undeniably charismatic and a pure delight! Deutch carefully crafts the character of Peg combining the conniving, calculating and care-free attitude of Jordan Belfort meets Harley Quinn with less debauchery. Undoubtedly the parallels of “The Wolf of Wall Street” shall certainly resonate with most moviegoers, but tonally it’s closer to “Boiler Room” meets “The Big Short.” Deutch’s delightful innocence and intelligent character transformation takes you on a wonderful ride.

Zoey Deutch is one of the most exciting, entertaining actresses of her generation. Peg could’ve been more obnoxious and ostensibly offensive, but Deutch conveys charm so effortless she makes her a fun firecracker and anti-hero to watch. Overall, you can’t help but root for her throughout and love the hustle. Deutch definitely deserves your attention and her comedic timing transforms this young adult comedy into something worthwhile. 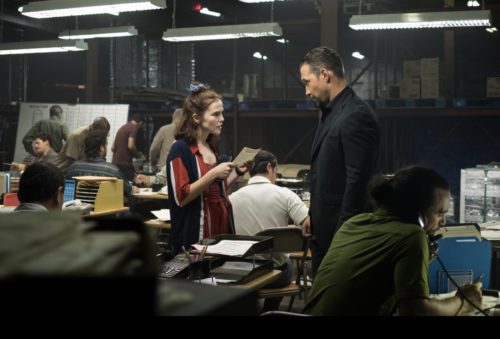 “Buffaloed” is a clever comedy, which commands your attention from beginning to end with a fun, fast-paced film. Much like “The Big Short,” the film explains the shady side of debt collecting by constantly breaking the fourth wall to explain various terms and practices. Although annoying in certain circumstances, the charming capabilities of Deutch makes it endearing and effortless overall. Some people might dislike watching a morally ambiguous and narcacisstic character coach others “how to skirt the law,” but the same enthusiasm, entertainment and excitement with “The Wolf of Wall Street” should certainly resonate with most fans.

Judy Greer appears as Peg’s mom and proves once again she slips into another awesome character. Not going to lie a big smile came over my face when I realized Greer was involved and the same can be said about Jermaine Fowler. I loved him in “Sorry To Bother You,” but felt his performance didn’t quite gel to deliver the goods. The real surprise however is Jai Courtney’s sleazy debt collector and the grim reality of how unscrupulous these type of guys will do anything and everything just to make a buck. I love how much I hate his character and that’s a testament to his performance.

Overall, it’s a fun film even if it has a convoluted plot. Throughout there are too many memorable moments and for anyone wanting a great time, you won’t be disappointed. Just remember, never get into an argument about “Anchor Bay or Duff’s” buffalo wings unless you’re willing to fight a judge!