This weekend was the annual C2E2 AKA The Chicago Comic & Entertainment Expo! We’re going to have a recap from Erica coming up, but first Melissa just sent in this awesome recap about her time at the con!

Melissa was able to meet the awesome Tyler Posey (who is awesome BTW) and had a great time with her friends!

This past Friday and Saturday I attended C2E2 (Chicago Comic & Entertainment Expo). The event has grown in both size and caliber since I first attended in 2011. This year’s guests included: Stan Lee, Chandler Riggs, Tyler Posey, Crystal Reed, RJ Mitte, Nicholas Brendon, Eve Myles, Alfie Allen, and Natalia Tena…just to name a few.

Upon arriving with my friends on Friday morning we split up to divide and conquer. My one friend decided the first thing she wanted to do was hop into the Chandler Riggs line (he was the only person on her autograph list that day) so I kept her company. He was supposed to start signing at 11, but around noon we were told he’d arrive at 1:30. We opted to walk the floor for a little while before joining the line again. The floor had every type of merchandise I could imagine. From pins to shirts to jewelry to kilts and corsets. Plus you never know who you might meet along the way: 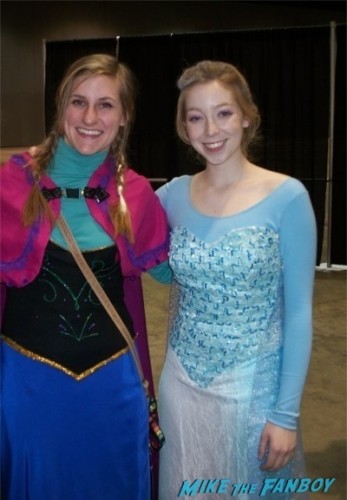 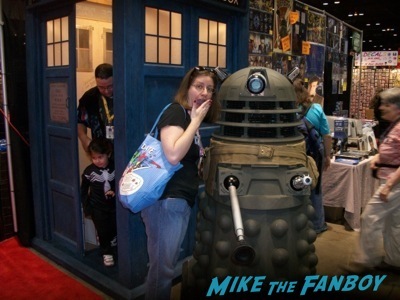 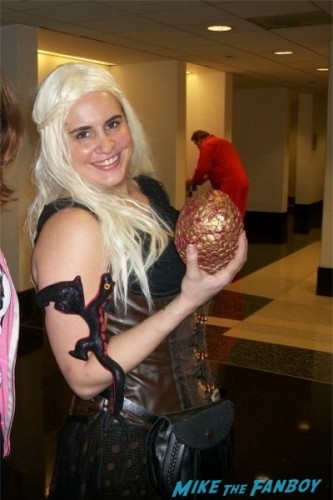 Around 12:30 we got back in line for Chandler. I’d say we were about twenty people back. I was glad she decided to get him on Friday as he was the only Walking Dead cast member at the con and Saturday is a lot more hectic. Wrestler Mick Foley was signing next to Chandler’s booth. He seemed to be having the time of his life.

Though I know nothing about wrestling I was tempted to join the line because it looked like fun! Around 1:30 Chandler’s parents starting setting up the booth. There was a very strict no photos policy (this was true for most celebs as they were all doing photos ops throughout the weekend), but while my friend was getting her autograph I took a quick pic. I could not get over how small Chandler is. My friend said Chandler was very sweet and polite. 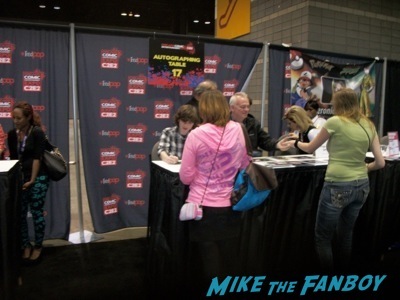 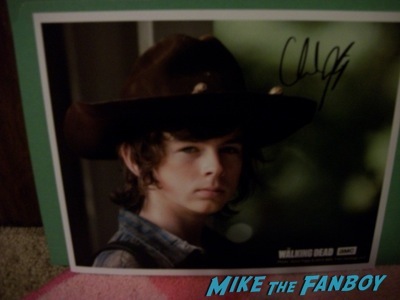 After that we headed to Artist Alley. I’m always amazed (and envious) of how talented people are. While we were in the Alley we met indie fantasy author Matthew Wolf. He was selling copies of his book The Knife’s Edge, which is the first book in The Ronin Saga. Matthew was very sweet and signed copies of this book for us. He was even nice enough to give us some swag and pose for a photo. 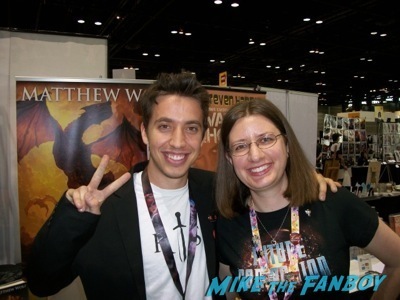 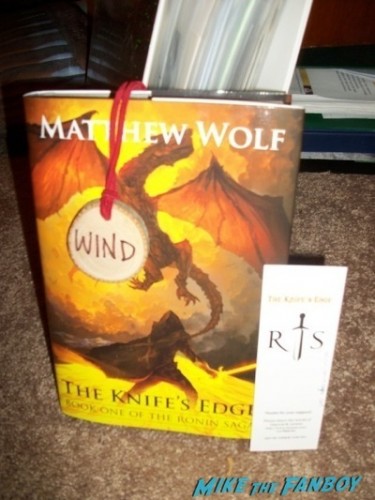 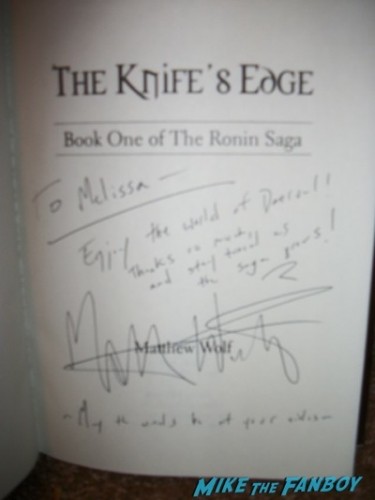 We spent the rest of the day shopping before heading home to gear up for day two. 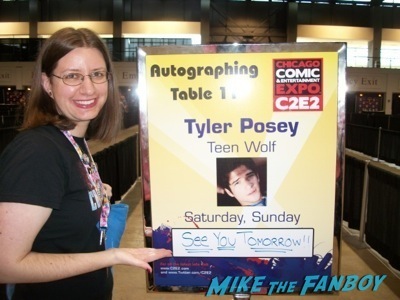 On Saturday morning two of my friends and I headed right to Tyler Posey’s booth. I am a huge Teen Wolf fan and was ridiculously excited to meet Scott McCall. The signing (in fact all signings that day) was supposed to start at 11:00, but no one really started arriving in the autograph area until 11:45/12:00.

No biggie, though, as it was fun to people watch. We saw Deadpool and Frodo get in line for Alfie Allen. Who knew they were fans? The first to arrive in the autograph area were Natalia Tena and Kristian Nairn (Hodor on Game of Thrones). A few minutes later Alfie arrived followed by a sighting of RJ Mitte (on his way to a photo op). Then Tyler was spotted walking down the staircase to get into the autograph area (cue the screaming girls). Tyler could not have been sweeter. He was so excited to be there. He was like a kid on Christmas…just so genuinely happy. He was looking fans in the eye and giving us each a moment. It was adorable. Here’s our interaction…

Me: It’s so nice to meet you.
Tyler: You too. How are you?
Me: Great. Much better now.
Tyler: Why’s that?
Me: Well, the line wasn’t moving, but now that it has I’m here with you and I’m happy about that.
Tyler: I’m happy about it too.

As I was telling him how I was looking forward to the new season he started to write my name on the photo. While we were waiting in line we each got a piece of paper to write down our name so Tyler could just copy it, but he spelled mine wrong and then realized it…

Tyler: I totally fucked up the letters in your name!
Me: Yeah, you gave me an extra L.*laughing*
Tyler: Oh no! I’m so sorry.*laughing*

At this point his manager tried to give him a new picture, but he promised he’d find a way to fix the one he had already started.

Tyler: How about I tattoo your name on my face. Is that okay?
Me: Sure, I mean it’s your face. *laughing*

So he finished signing the photo and told me there was no way he’d forget me now. We talked about Chicago for a sec and then I thanked him, shook his hand and was on my way. Here’s the end result: 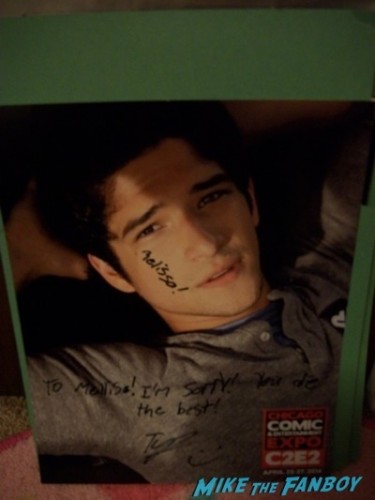 Again you weren’t allowed to take pictures but I tried. 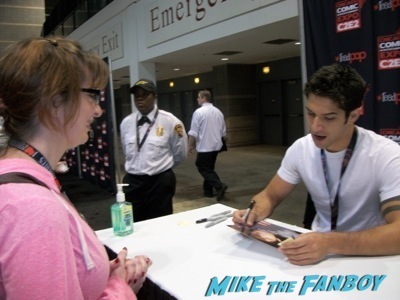 My one friend headed back onto the floor while I kept my other friend company in the Alfie Allen line. Theon is her favorite character on Game of Thrones so meeting him was a must. The days he was attending the con kept changing so she was very happy he was actually there. I tried to take some pics during the signing, but I got chased away. She said he was very kind and they were able to chat for a few minutes about the show. 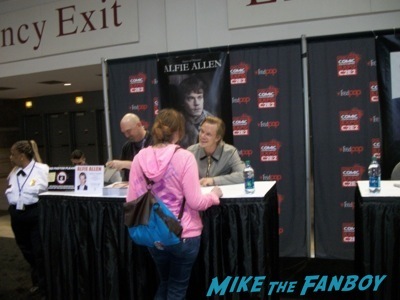 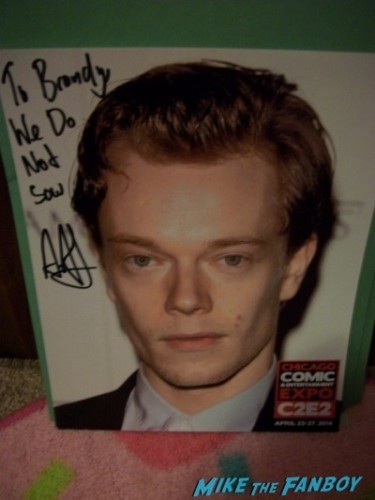 Next up was the Tyler Posey photo op. I hadn’t planned on doing it, but my inner fangirl got the best of me. When I walked in for the shoot Tyler told me how much he liked my shirt. I told him I wore it because I knew I’d be meeting him and he said that was awesome. We took the picture and I thanked him before I was on my way. They print the picture right on the spot: 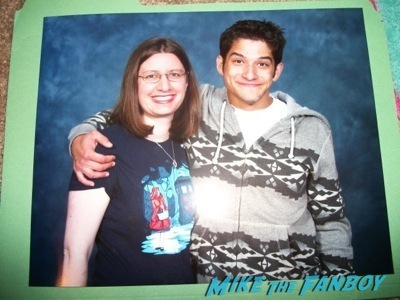 Time for the Teen Wolf panel with Tyler and Crystal Reed. I never cared much for Crystal’s character on the show, but she had a lot of interesting and thoughtful things to say during the q&a. She and Tyler had a very sweet chemistry. They talked about the show’s progression, where it’s been and where it’s going. Towards the end of the panel Tyler told us he really needed to go to the bathroom and bolted once the panel was over. My friend saw him getting out of the bathroom and said he was attacked by a hoard of fangirls. Poor guy! 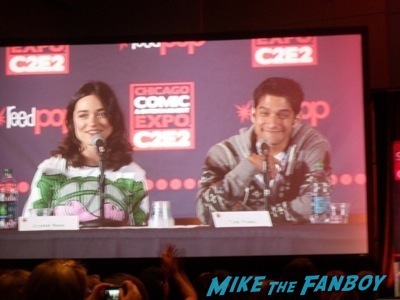 The last thing on the agenda was meeting Jesse Rath from Defiance. Several cast members from Defiance and Warehouse 13 were attending, but they were hardly at their tables so it was hard to catch them. (Also interesting, they were the only group of celebs offering lean in photos, though in Eddie McClintock’s case you could pretty much sit in his lap.) Luckily Jesse was there and my friend got her autograph. Jesse looks so different from his character Alak. He was very sweet and thanked her for watching. 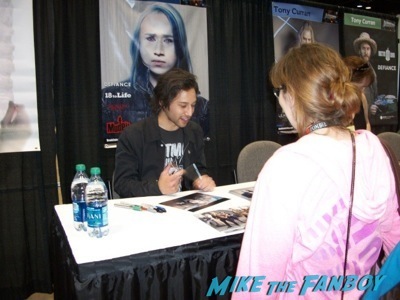 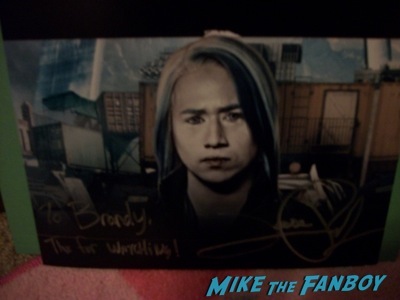 It was hard to get close enough to take pictures, but I did see Nicholas Brendon, Eve Myles, and several cast members from 24. A couple more loops around the floor and it was time to close the books on another successful C2E2! 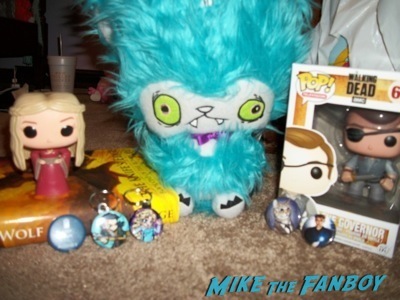