I have to tell you… I’m really bummed!

STARZ today has cancelled the horror comedy hybrid series Ash vs Evil Dead. After three seasons of blood soaked carnage, the series is saying goodbye. The season finale is going to serve as the series finale and likely to be the last we see of Ash for the conceivable future. 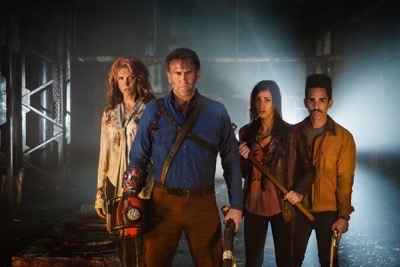 “Ash v Evil Dead has taken audiences on a wild ride for three seasons thanks to the fantastic performances and creative efforts of Sam, Bruce, Rob and the entire cast and crew. We are proud to send the show out with a bang…and a splat,” said Carmi Zlotnik, President of Programming for Starz.
Bruce Campbell tweeted out his thoughts on the cancellation.

I will always be grateful to Starz, Sam Raimi, Rob Tapert and our tireless fans for the opportunity to revisit the franchise that launched our careers. Thank you! 😎 pic.twitter.com/oNmTopS1Ab