Home / Fanboying! / CB Crashes Through a Family of Four To Try And Meet Hugh Jackman! Signing! Madness! Autographs and Drama From The Wolverine Star!

I can’t even tell you how many calls I got about this… My Lord, there was so much drama over Hugh Jackman! LOL… I know I know he’s Wolverine, but you know… he’s never been in anything that I feel has been super iconic yet. Hold on… Wolverine is most definitely his role, but Wolverine the movie wasn’t the best, X3 wasn’t good, X-Men (the original) was good, but not great, so we’re left with X2 which was the best in the series. So, I feel like even that role hasn’t lived up to its potential yet… I dunno…

Still I really enjoy Hugh Jackman, I just wasn’t going to go through all the madness trying to get him in the crowd of people and then get a crappy signature… Ugh… Especially since I have a poster that’s signed, “To Mike All The Best” with a full Hugh Jackman…

CB was on the scene and was successful… Check out his report after the jump!

NANANANANANA, CB, CB, CB! Today I am going for the current top of my autograph bucket list, HUGH JACKMAN! I can’t even tell you how much I loved The Prestige because it featured the awesome combo of Christian Bale and Hugh Jackman and directed by Christopher Nolan. Oh how I love Nolan’s films, Memento, Batman Begins, Dark Knight and Inception are always rotated out of my dvd player. I’m a comic dorkus, and of course, I enjoyed the first two X-Men movies and Van Helsing. (I’ll keep my comments to myself on the third X-Men movie.) Sadly, I’ve never met or seen Hugh Jackman and when I saw he was in town promoting Real Steel, I decided I had to go for him. I was really hoping to get him on this cool Wolverine picture I love. Here’s hoping for the best.

4:10: Within ten minutes of me talking with the two and sitting down, we spot an SUV pulling up. Of course, I’m sitting down and in mid driveway, he stops and rolls down the window and signs for the three of us. 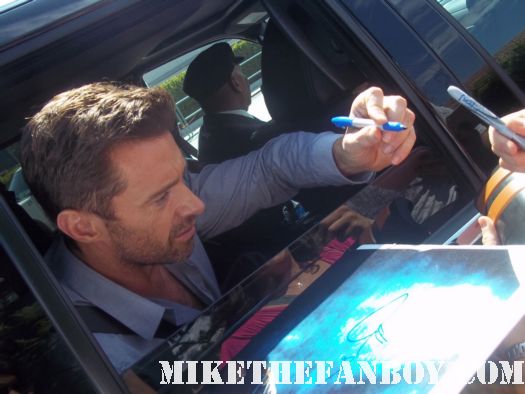 I’m able to get my photo signed and he signed it beautifully in the light area.

Oh I’m so happy Hugh signed and gave me this great signature. That’s one person off my list to get. Take care everyone. Until next time, same CB hour, same CB channel, same CB BLOG! KAAAAAAPPPPPPOOOOOWWWW! 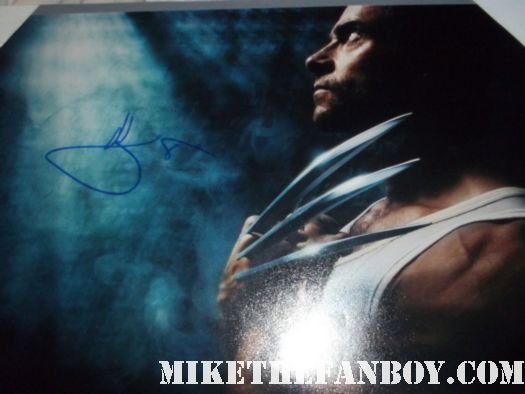