Home / Fanboying! • Weeds / CB Gets All Adork-Able For New Girl Star Zooey Deschanel and Gets To Meet The Lawman Himself Steven Seagal! Autographs! Photos and More!

I remember a time when Zooey Deschanel was hyper hard to get. I mean like turning people down flat un-friendly. Lately though, she’s warmed up. Perhaps it’s the fact that her show New Girl is such a hit and she’s not an indie darling anymore. I don’t know. But whatever it is… I’m happy about it.

CB headed out to meet the Adorkable one and also… wait for it… wanted to meet Steven Seagal… I know I know the 1980s, but still… I like my 1980’s icons cheesy and fun. But I suppose Steven Seagal is cheesy and fun, lol… Oh, I’ve had too much Coke Zero today.

Anyway, check out CB’s report about meeting the two stars below!

Deh-shay, bah-sah-rah, Deh-shay bah-sah-rah! I was really excited today because two people I really like were filming a talk show together. I love the adorkable Zooey Deschanel who stars on the hit Fox show New Girl. I really loved her in 500 Days of Summer, but getting that cast poster done will never happen!  Steven Seagal, while he may never win an Oscar, is still a legend.

Lawman is a great show to sit back and enjoy. I had never met Zooey or Steven so I wanted me first experience to be pleasant, so I had high expectations today, even knowing Zooey’s past.  Zooey used to be so hard to get, but luckily she has been way nicer. Getting her to sign used to be impossible.  I went to the Our Idiot Brother premiere and didn’t get her. I’m also a fan of She & Him and think her voice is great in her unique way. Armed with my photos, I head off!

I arrive and am joined by my fellow friends. The general consensus is we expect to get Steven and not Zooey, which I wouldn’t mind too much, but really want to get both. We all hang around the barricade and wait. The first guest to arrive is the Lawman himself, Steven Seagal. He shows up in a three car caravan, excessive much? But he is a cop. We spot him and call for him, and he thinks about it, then casually walks over. 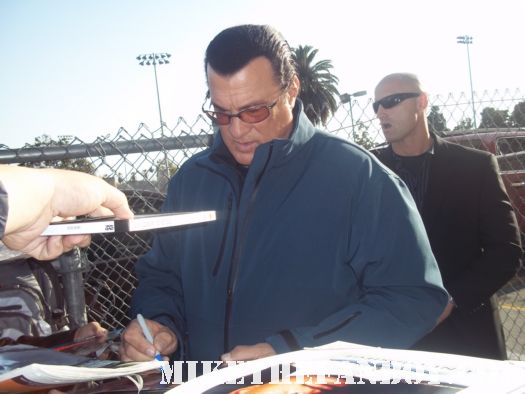 Now, I’ve never seen him before, but the guy is TALL! He towers over everyone and since we all know he can kill us, we stay very calm. He signs his life away and does photos with anyone who wants one. He’s super nice about greeting fans so A+ for Steven! 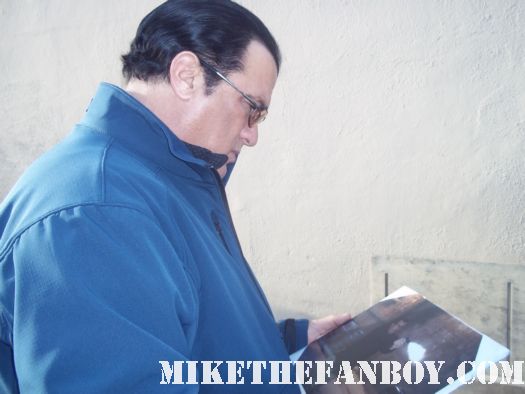 Next to arrive is Zooey and we notice two bodyguards checking the fans and alley. I didn’t know Zooey was such a huge star to need two bodyguards, but okay. She arrives and darts into the studio. We don’t get a wave, no acknowledgment from her. Such a bummer! We have to wait for her to leave now, but its getting WINOLD.

An hour later she leaves and we chant for her, and she comes over. Her bodyguard hands her a pen and she starts on the other side. 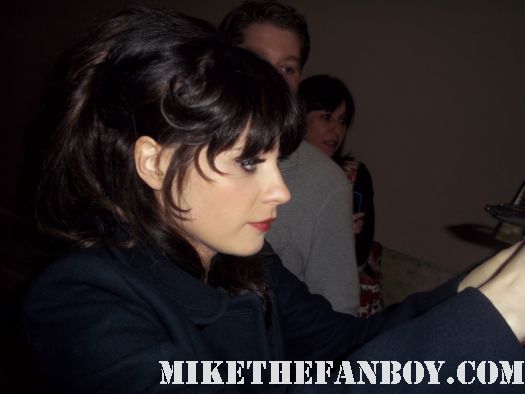 I eventually get her on my photo and just like that, she leaves. I think she signed for about 40-50 seconds. She’s quiet and doesn’t really interact with us, but she signed so I’m happy. 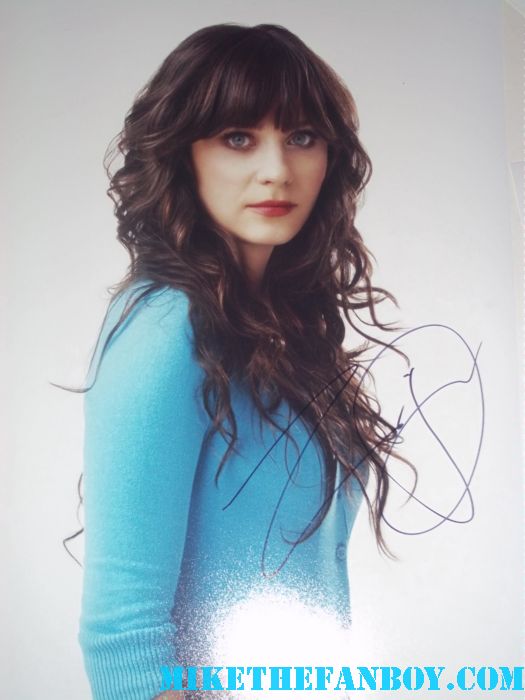 I got both celebs to sign my photos so I call that a good day. I was surprised by how cool Steven was, and hope more celebs can be like Steven. When Mike The Fanboy is ashes, you have my permission to die. Until next time, same CB hour, same CB channel same CB website! KAAAAPPPPPOOOOWWW!