I have to say, I am very impressed with Christian Bale. He has been so nice lately, and become even more fan friendly. Erica told CB and I about a rare Q and A that Christian was going to be at and of course we all had to go. Now CB insisted that he do the write up, and since Christian Bale actually stands for CB, or CB stands for Christian Bale… Hmmm is this a case of which came first the chicken or the egg?

Regardless it was a pretty special night, and you can probably read the joy eking out of CB’s pores below. It was also nice to see Liz and Gregg, a couple fellow fans who are awesome!

Check out his full recap after the jump. And no I didn’t include the video of CB crying after he got his photo… In fact I promised I wouldn’t mention it, so I’m not going to. Good times…

NANANANANANANANA, CB, CB, CB! It’s no secret that I am a Christian Bale fan; he is my #1, the king of the mountain among my favorite actors. The list goes #1 is Christian…and then everyone else….yes, even Paul Walker is not anywhere near Christian Bale. It’s not even the fact that he is Batman and I love DC comics, but it’s just that he is an amazing actor. The Fighter, Rescue Dawn, The Machinist, American Psycho, 3:10 To Yuma, The Prestige, and all the Christopher Nolan Batman movies. What I love about Christian is his commitment to roles. He can lose 30 pounds to play a drug addict, and then pack on 25 pounds of muscle for another role within the span of a few months! In fact, when I met him on set, I made it an effort to say “congratulations on your well deserved Oscar” to which he thanked me. He’s always been a great person to fan, so it’s impossible for me to have anything bad to say about him. I even told Mike once; I would be honored if he yelled at me calling me an “amateur”.

Now, I have met him before on set (you can see the previous write up) and today Christian Bale was doing a rare Q& A promoting the movie Flowers of War. For those who don’t know, Christian doesn’t do talk show because he hates being the center of attention, so even doing a Q & A was a rarity and treat. I prepare my stuff and I’m praying and hoping Christmas comes early for me, because it’s not often you’ll get this opportunity with Mr. Bale.

8:30: I arrive to the venue and am joined by Mike and Erica. We are waiting around for him to arrive.

9:00 We never see him arrive, but we overhear he is here, so we walk up the stairs and OMG there he is casually taking the escalator. I then proceed to run up four flights of stairs to beat him to the door and ask him to sign, but he says, “I can’t. I’ll be late and that will be rude”. He then says, “on the way out, and you stay right there”; I say,” you promise” and he says “I promise”. He goes inside and talks to someone then comes out to me, and says, “I got ten minutes, what’s your name?” 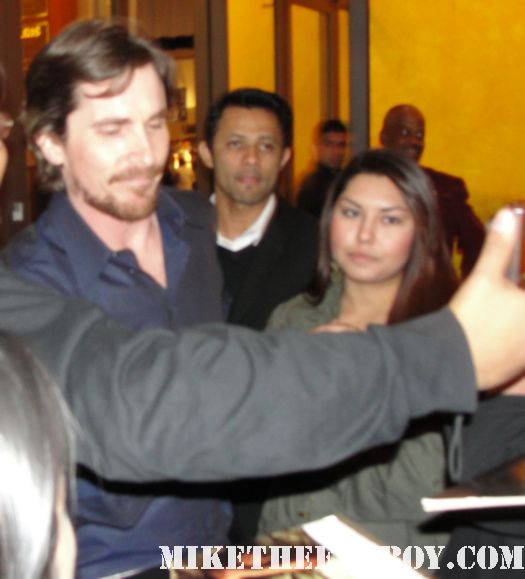 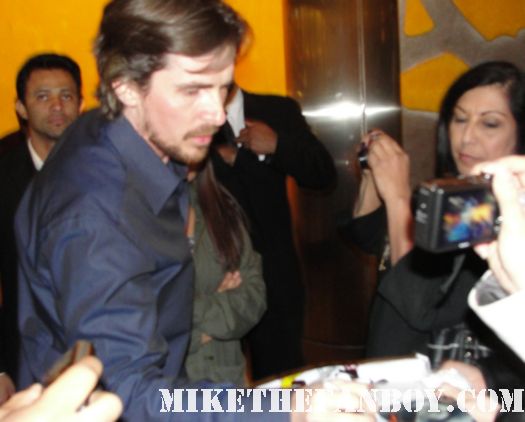 At this point I can’t talk, the only words in me head is “don’t say anything stupid”. Christian is SOOOOOO Nice signing items and doing photo ops, which I just had to get. He finishes and goes inside… 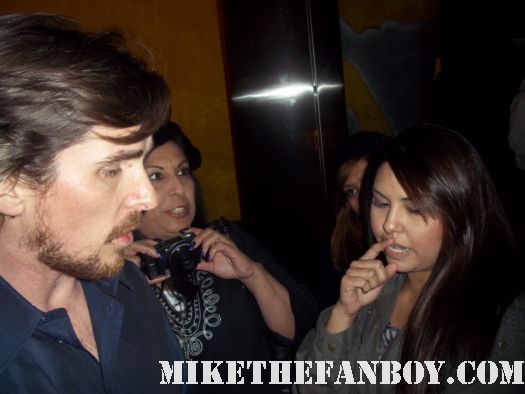 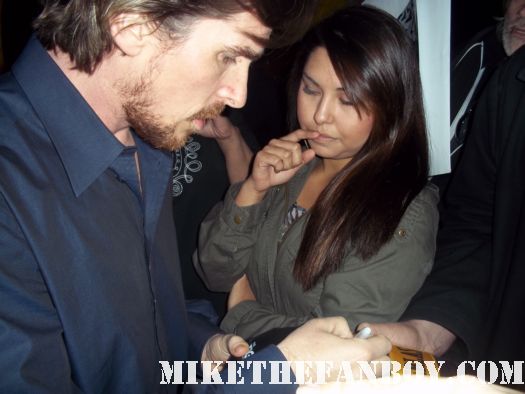 (Editor’s Note: Christian is very nice. I have a pair of rare original promo The Fighter boxing gloves and I had Christian sign those for me. Erica had Christian sign her Dark Knight Returns mini poster. He was very generous, although neither Erica nor I were able to get a photo with him…Sigh… M-) 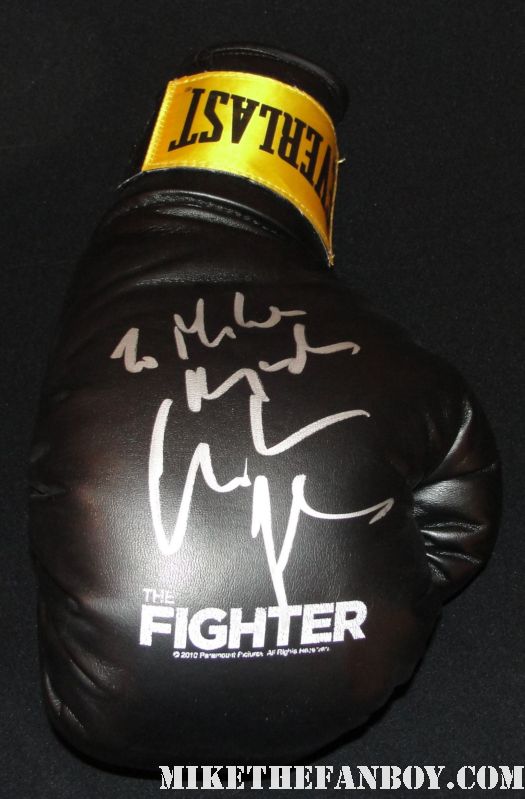 10:00 After the screening, he signs more autographs and I get him on my Batman Begins TUMBLER which is now my coffee table centerpiece! 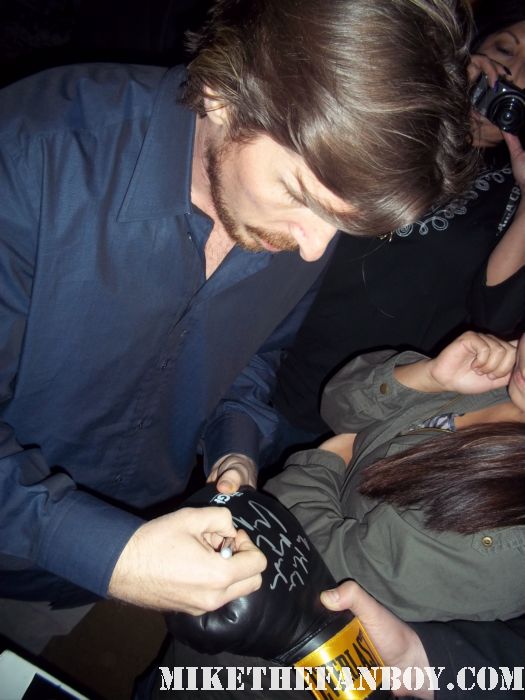 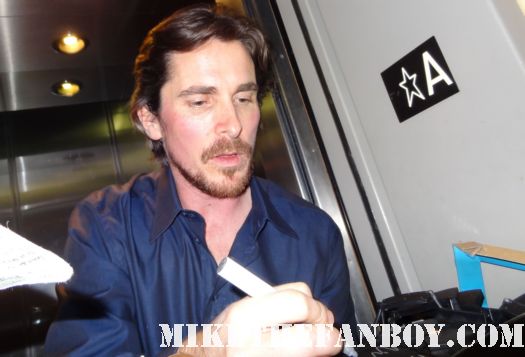 Christmas came early for me. Nothing, and I mean nothing could top meeting Christian Bale this year. I will be a fan for life, because he’s and awesome actor and awesome to his fans. Happy Holidays and until next time, same CB hour, same CB Channel, same CB BLOG! KAAAAAAPPPPPOOOOOOW! 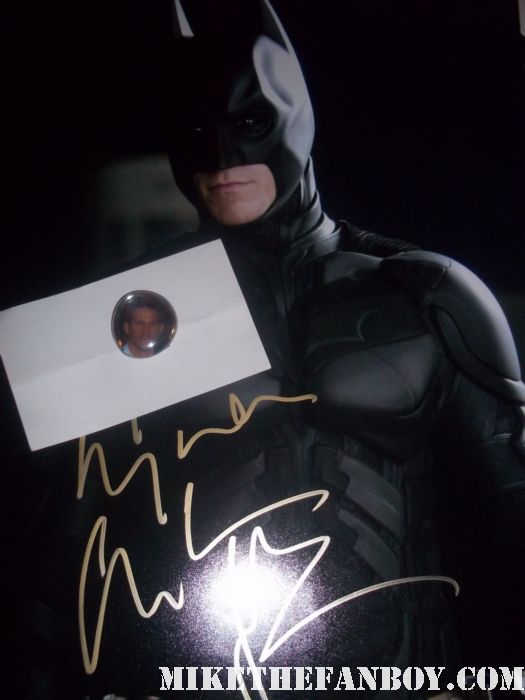 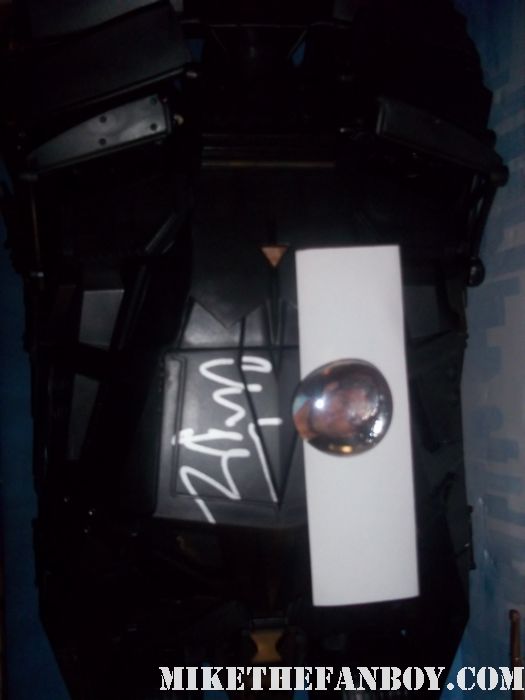