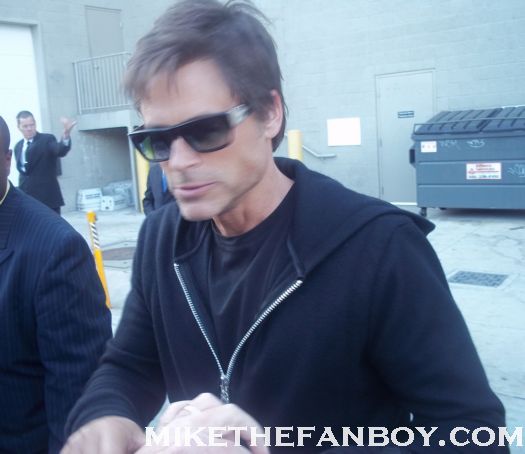 I’m still here in the big KY hanging with my sister, mom and grandma. And in my hot little inbox I received a bunch of stuff! First off today is CB’s fun report about meeting Mr. Rob Lowe. The 1980’s icon himself! It’s strange because when you think… Rob Lowe immediately my mind goes to The Outsiders, or About Last Night… I mean really there are so many movies Rob Lowe has done! St. Elmo’s Fire, I mean those are just a couple… Austin Powers, Wayne’s World, etc… I have asked Scotty to bring my A View From The Top mini poster with him to try and get signed because I knew that he would be bringing his DVD of A View From The Top. It’s a cult classic! Leave me alone! Lol…

Check out the full report from CB after the jump!

NANANANA, CB, CB, CB! Since Mike is out of town, the website will temporarily be cbthefanboy.com!!! CB 24/7 everytime, all the time….HAHAHA.

(Editor’s Note: I just threw up in my mouth a little. M-)

Anyways, today I am going for the very talented Rob Lowe. I am a big fan of Parks and Recreation and Rob plays Chris, one of the auditors along with Adam Scott. If anyone hasn’t checked out the show, you should, it is one of the best comedies on television right now. Today Rob was doing a talk show appearance and I’ve never met the guy, so i thought i would go for him. I’ve met most the Parks and Recreation cast, but he and Adam Scott are the newcomers. I have two photos for him, and Scotty is bringing his DVD cover, and some dorkus’s poster.

(Editor’s Note: The poster belongs to a very nice, kind and tall Canadian who is out of town! M-)

Hopefully not to many people.

5:00: I arrive and I’m shocked to see over 30 people for Rob Lowe. I expected ten or fifteen at most, but thirty, wow!

5:30: The security tells everyone they have to be behind the barricade… this means we will not have paps behind us try to sneak in photos… great…

(Editor’s Note: There are too many things to say about “Winold…” Too many! M-)

6:40: We see a black car pull up to the door, and Rob steps out. We chant for him, and he talks to security puts on his jacket and comes right over. 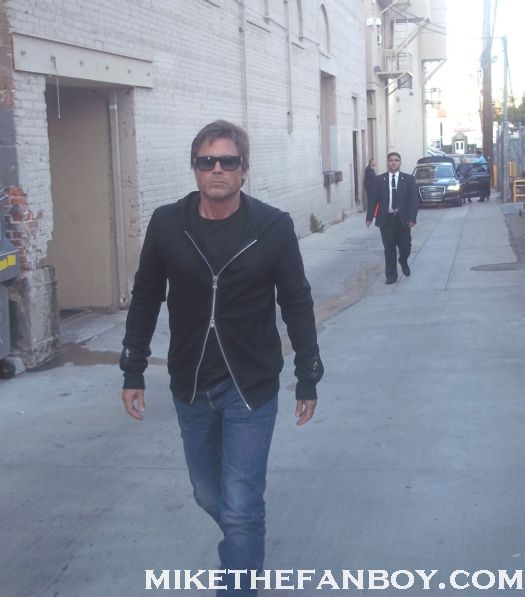 He signs my photos, but I ask him to personalize a photo, and it just says “TO CB”…..I ask him if he can actually sign it and says, “OOPS, forgot to sign my name” and signs it…. 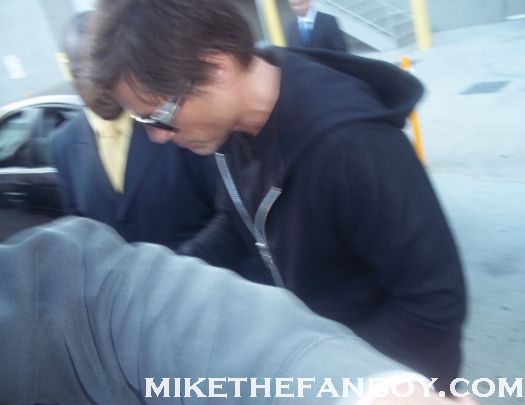 He gets both of Scotty’s items and does the line before being rushed back. Really nice guy, soft spoken and takes his time with fans. 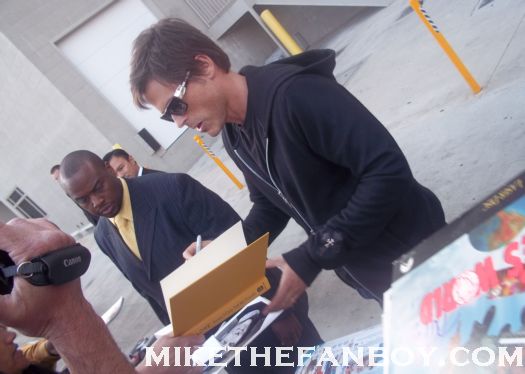 It was a good night. Rob was a nice guy, so i highly recommend everyone catch him on Parks and Recreations. Until next time, same CB hour, same CB channel, same CB blog. KAPPPOOOOWWW! 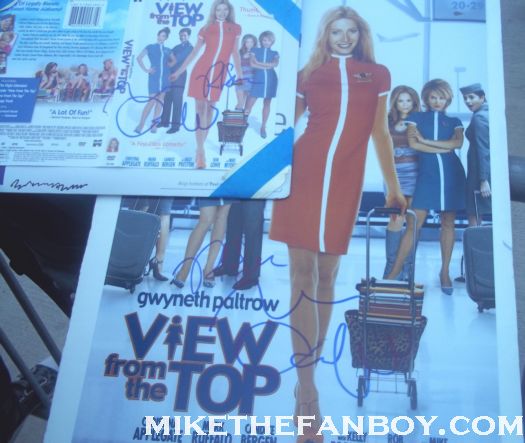