It’s Cult Classic Corner time! Jack is back and talking about the time he met Charlize Theron… Jack has met her twice… TWICE… how many times has Mike The Fanboy met Charlize? Nadda… Grrrrr…

But both times Jack had Aeon Flux to get signed, so I’m not sure who’s winning here… Doh! Just kidding… As you could tell, the subject of this weeks CCC is Aeon Flux. The sort of over the top action flick best watched with the sound off! Lol.. I kid, I kid…

Check out Jack’s full article below!

Considering a bad sci-fi film is coming out this week (“Riddick”) I decided to revisit arguably one of the crappiest sci-fi films in recent years, Aeon Flux. Fanboys freaked out when the cult TV show received a big screen adaptation starring the super hot, Charlize Theron. However, not even the super attractive and talented Charlize could save this movie. 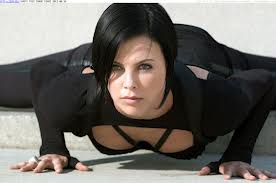 Since “The Devil’s Advocate” I have been a huge Charlize Theron fan and will literally see anything she has a part in, even if it’s an extended cameo like “The Road.” I really, really like. Did I mention how hot and talented she is? Sorry, I’m getting side-tracked here.

“Aeon Flux” is about the titular character (Theron), who lives in a society where almost the entire population (about 99%) has been wiped out by a virus. Aeon Flux is part of a movement fighting against the council, which controls all the resources and yadda yadda yadda…basically Charlize Theron is in spandex the entire time. If you want a somewhat watchable sci-fi flick, this one is for you. 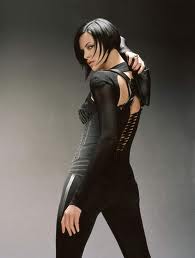 Although I met the entire cast (including Charlize) at Comic Con during their limited autograph signing I want to discuss the time I met her at a Q&A. I attended a Q&A with Charlize and her then longtime boyfriend Stuart Townshend for “Battle In Seattle.” The film was directed by Stuart and portrayed the protests occurring during the World Trade Organization’s Ministerial Conference in 1999. The movie was really cool and helped shed light on an interesting part of our recent history. 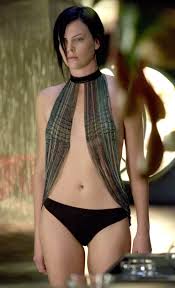 To my surprise, even though the theater was sold out online, a lot of people were no-shows despite a Q&A with Charlize and Stuart. Both were really down to earth and Charlize had the best zingers during the Q&A. She even bragged that it doesn’t matter what she does now because “she has a fucking Oscar.” God, I love her! Not only does she have a great sense of humor, but really knows how to captivate a crowd.

Afterwards I managed to snag her on my Aeon Flux DVD (I really didn’t expect I could approach her) and got a condensed autograph. She only signed a handful of autographs while most gravitated towards Stuart. Charlize quickly exited, but Stuart stayed. After a few minutes, Charlize snuck back into the theater to see what was happening and if I was prepared (either with a camera or an extra item), my buddy and I could have gotten another autograph. I have been extremely fortunate to meet Charlize twice and both times she was awesome. Until the next time, happy autograph hunting! 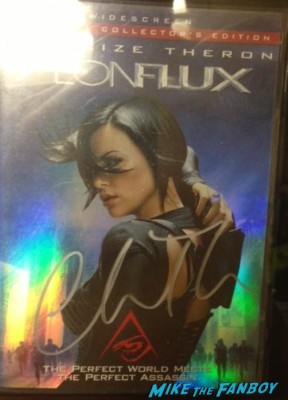