Home / Billy Beer's Barstool • Fanboying! / Charlize Theron the Monster is Nothing But a Queen for Billy Beer! Autographs! Photos! Did Hell Freeze Over and No One Tell Me?!?!

I have to admit, I’m a bit jealous over this one! I have wanted to meet Charlize Theron forever! Grumble… LOL… Billy Beer went out to try and meet her in what he thought was going to be a futile attempt. It turns out… That wasn’t the case! I was a tad shocked when I heard this I will admit! Could The Evil Queen be changing her ways? Hmmmmm

This sort of event happens once every year, sort of like a luner eclipse!

What a world of contrast I decided to try today. One of the nicest guys in the world Jeffery Dean Morgan, as proved to me at the Spirit Awards, and well, the Natalie to your Portman, the Elizabeth to my Banks, the evil queen Charlize Theron. Now I’ve never met her, but I’ve heard some horror stories. All I know is I’ve liked her ever since James Spader created the best use for an ice cube EVER in 2 Days in the Valley

I hadn’t planned on going out today, but someone who used to write for Mike the Fanboy (I think he got stuck in a Winold) we’ll call him P.W. really wanted to get Jeffery. It’s sometimes hard to pass up a usual sure thing. So I picked up a Magic City picture, and for some reason spent $3 on a Charlize photo to probably collect dust in the future, and I’m on my way.

Well, I’m almost there, and UGH! Construction! This delays me about 5-10 minutes but I’m not too worried until my phone goes off. P.W. is calling to tell me Charlize stiffed on the way in, and Jeffery signed 2 minutes ago. UGH! Well I’ll wait, again, one of the nicest guys in the world.

After a quick trip to the bank and grabbing a snack, it looks like we have a few more fans waiting for graphs. They’ve got a sign, and are all wearing Burger King crowns. I’m not complaining, I’ve seen gimmicks work before. After a lot of talking about this person and that, it’s game time!

Charlize is the first to come. I’m expecting a cool breeze to rush past my face in just a couple of seconds. We kinda stand back while the people with the sign and crowns jump up and down to get her attention. The SUV is ACTUALLY slowing down…..Is that window really going down? Holy Balls this is actually happening. Charlize rolls down, and is nothing but nice. 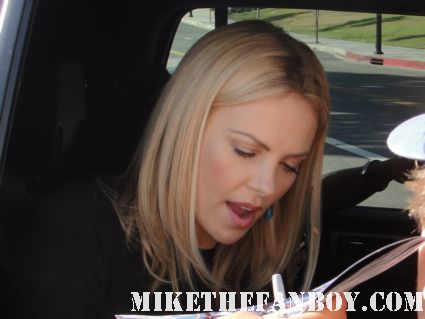 She tells us she’s in a hurry to get to Ellen, but she took the time to sign for all 7 of us. She even took a picture with a few fans. 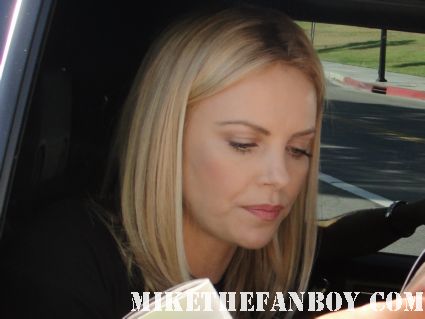 Before we knew it, she was gone and we were all just standing there dumb founded. So much so, that we totally missed Jeffery leaving. Oh well, I would say I’m quite happy with what I got. I can’t speak for the fans any other time, but today Charlize, you were the best!!! 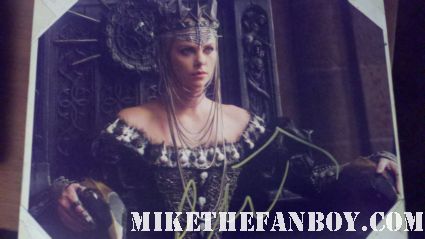