You know it’s funny. I love reading everyone’s recaps so much because it just makes me smile when people get to meet someone they truly love and admire.

Charles and his fiancee Justin headed to the Hollywood Show in Chicago to meet Dallas star Charlene Tilton. They even made T-Shirts. Awwwww how cute is that?

Charles did an awesome recap about the event, check it out below!

I snuck away like a thief in the night (okay, it was broad daylight) last weekend to attend the Hollywood Show in Chicago.  My primary target for fanboy gushing: Charlene Tilton of TV’s Dallas.

Having secured just Friday and Saturday off work, I knew my time in Chicago would be lightening-quick, but I was game.  The plan was for me to fly from Minneapolis/St. Paul International to O’Hare, wait for the hotel shuttle to whisk me away to the lovely nearby Best Western (hey, it was a quick, budget-conscious getaway), and then to wait for Justin, my fiancé, to arrive at the hotel.

Upon arrival at O’Hare, I called the hotel to let them know I had made it.  They instructed me where to go to meet the shuttle and told me it would be about a half-hour.  As I walked toward shuttle pick-up, I noticed a woman holding up a sign reading “The Hollywood Show.”  Being that I had some time, I gave into a bout of fanboy curiosity and decided to hover inconspicuously for a bit to see what celebrity this hard-nosed, serious handler was here to retrieve.  I waited…I waited…Finally, I had to make tracks if I was going to meet up with the shuttle.

Normally, an hour wait for a shuttle would be utterly mind-numbing, but I was only too happy to wait outside in 80 degree weather, having just left 36 degrees back home.  When the shuttle finally arrived, I hopped on to find I was his only pick-up.  The 20 minute drive was passed in no time as the driver made small talk about why I was in town and also giving me my bearings as far as places to eat and things to do in the area.

After check-in, I grabbed a quick snooze.  Justin arrived about an hour after me and we just spent the night relaxing together and preparing for the show the next day.  As we watched some Lucy-themed episodes of Dallas (the episode centering on her engagement to Mitch Cooper and the two-parter showcasing their wedding), Justin busied himself making T-shirts for us to wear.  In response to my wish that I had something Dallas-themed to wear when I met Charlene, he found this beautiful artist’s rendering of Lucy Ewing in all her glamour vixen glory and was now making shirts for us, plus one as a special gift for Charlene.  The shirts turned out superbly and we couldn’t wait to present Charlene’s to her.

The next day we got up bright and early, grabbed a quick breakfast, and headed over to the Hyatt.  At the guest check-in table, we were greeted by a very enthusiastic, fast talking pretty brunette giving us the low-down on the convention, including where the lines for the biggest celebrity draws were.  I was relieved to find out that Charlene wasn’t one everyone was lining up for, which meant we might have some extra time to chat with her.

We entered the first ballroom and the convention was really in full swing, which was to be expected considering it was around noon.  We milled about with the rest of the celebrity enthusiasts for a bit and observed celebrities that, while we weren’t interested in meeting them, were still interesting to see.  Ed Asner walked past me on his way back to his table; Angie Dickinson was shuffling around the whole place; and Stefanie Powers was in full Jennifer Hart mode.  If they were giving out prizes for best table, it would have been given hands down to the Nelson brothers.  In their little corner they had a big table covered with pictures and memorabilia from their glory days.  Old touring costumes were displayed and on the wall was a big screen showing their past musical performances. Who do I spy tending to all of the Nelsons’ needs? That stern lady I saw at the airport!

As we were hovering, trying to choose our moment with Charlene, I began to think how great it would be to spring for the professional photo-op, so I marched back over to the check-in desk to make my purchase.  Charlene was scheduled to pose at 2 P.M.  With the appointed time fast approaching, I decided it was best to get the actual meet-and-greet portion done beforehand, which turned out to be quite fortuitous as will soon be revealed.

Seeing our opening, we approached Charlene and, let me tell you, she is every bit as bubbly and vivacious as you would imagine, and so pretty, too.  It didn’t take her too long to notice our shirts.  She excitedly studied them to find out what was featured before blurting out, “Hey!  That’s Dallas!” (referring to the Dallas logo in the upper corner).  A bystander urged Charlene to examine the character a little closer, and that’s when it hit her.  “That’s me!  And look at those long legs,” commenting on the artists leggy rendering of the actress who, in reality, stands just 4’11”.  You could have knocked Charlene over with a feather when Justin reached out and handed her one of her very own.  The look on her face was priceless and she was beyond appreciative.

As I expounded on my theory about how, eventually, the character of Lucy Ewing really should have made the switch to Dallas spinoff Knots Landing, I dug out the issue of People magazine I found on eBay with Charlene on the cover dressed for her 1981 TV wedding.  As she happily signed the magazine cover, she said, “So, I guess all we need now is a picture, huh?”  I told her how much I was looking forward to our professional photo-op.  Her eyes increased in size and a puzzled look overtook her happy expression.  Apparently, nobody told her she would soon be spirited away to pose with a bunch of fans in rapid succession.  Justin pulled out the flyer with the schedule of the photo-ops to show her and Charlene frantically grabbed it out of his hand.  Everything turned out just fine, though; because of us, Charlene rose to the occasion like a true pro. 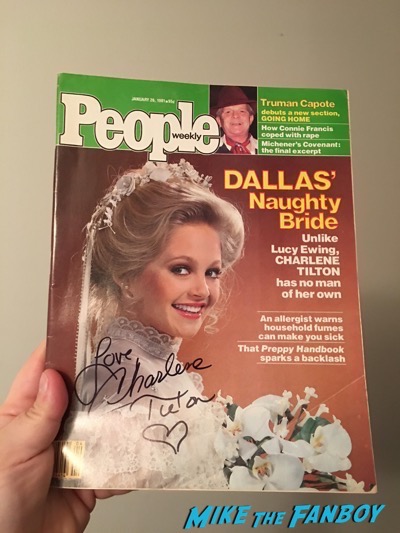 Luckily for Charlene, the photo-op schedule was a little off, so she had time to run and grab a quick bite to eat.  On her way back to her table, she ran into us as we waited in line to take our picture with her.  With all the excitement of a kid on Christmas morning, she asked if we wanted her to wear the shirt.  An enthusiastic “Yes, please!” escaped my lips before I had time to even ponder just how generous that was of her.

The wait for photo-ops was not bad at all.  For the most part, the lines were short and the process was quick.  We were the last in the short line for Charlene, which was for the best since she’d be doing a slight costume change just for our photo.  As soon as she saw us approach, Charlene sprang into action and immediately threw her “Lucy” T-shirt on over her pretty light blue top.  With a few clicks (Charlene didn’t like the first take), our photo-op was in the can.  We thanked Charlene and moved to the side to wait for our photo.  Once it was done, I grabbed it and noticed they must’ve printed out the first take, as I remember moving closer to Charlene in the subsequent click.  Oh, well.  It was still a good photo. 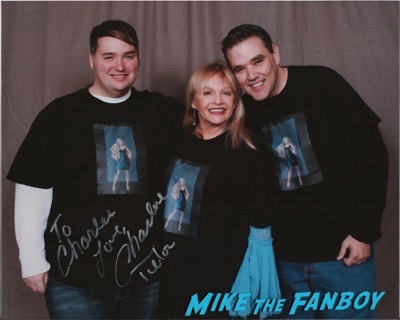 Justin and I made a few more laps around the convention before he decided to pull the trigger on a decision he’d been mulling over the entire afternoon: Is now the right time to approach Mary-Margaret Humes, known to a generation as Gail Leary, mother of Dawson Leary on the mega-hit of the late ’90s, Dawson’s Creek?  “Mrs. Leary” had nobody at her table, so it was the perfect time.  We would later find out this was her first convention appearance, but she sized Justin up right away and asked him if he was a Dawson’s Creek fan.  He went on to tell her how much of a fan he was of the show and what it meant to him growing up.  They talked at length with Mary-Margaret concurring with him about how authentic the adult characters on the show were, and the two bonded over how emotionally-charged the scenes surrounding Mitch Leary’s death were (resulting in Mary-Margaret getting chills).  She also shared her hopes about a Dawson’s Creek reunion, revealing that she’d even written a script for an episode should it come back in a limited run.

When it came time for Justin and Mary-Margaret to have their picture taken, she couldn’t have been more accommodating.  She asked me if I would like to be in the picture and I declined because I wanted Justin to have this moment for himself.  Commenting on my considerate decision, she told Justin he had better hang on to me.  I’m glad we stopped by her table because she couldn’t have nicer.  I hope she does more conventions. 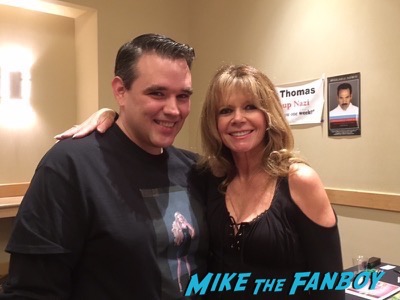 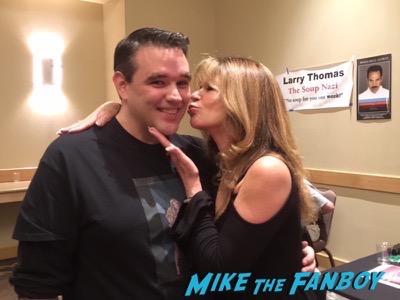 After we wrapped up our time with Mary-Margaret, we decided it was time to leave, but not before saying a final goodbye to Charlene.  When we got to her table, she wasn’t there, but we were happy to observe her over at the Nelson table having a fangirl moment of her own.  As she approached her table, she was thrilled to see us and to check on how the photo-op turned out.  She asked how I liked it and I told her I loved it, only casually pointing out the minor flaws that I could totally have lived with.  Now, this is how you know a celebrity really cares about her fans?  Picture in hand, Charlene marched in the direction of where the photo-ops were being shot, going on about how this was why she requested an additional shot.  I stopped her before she made it there saying I would take care of it and she was so thoughtful for caring enough to make it right.  While the photographers didn’t see any dramatic differences in the pictures, they allowed me to keep both photos at no additional cost.  When I brought the photos back to Charlene, she graciously signed them both at no additional cost, one to me and one to Justin.

All things considered, I had a wonderful time!  The experience was definitely worth taking an early Sunday morning flight home (I’m talking dark-outside-and-everyone-is-still-asleep early) so I can head right from the airport to work.  A special thank you to my manager for giving me the time off in the first place and sending me home a couple hours early when she realized I could use the extra rest.