Home / Fanboying! • The Scott-Files / Chris Pratt Awesomeness! Scott Gets To Meet The Parks And Rec Star And Have An Awesome Moment!

Scott headed out to meet none other than Parks and Rec star Chris Pratt. Scott is a huge fan of the star and really wanted a photo with him. Chris was out and about filming a talk show and Scott was one of only a couple people there.

Chris was super nice, and I’m so glad that Scott not only got to meet Chris but actually got to have a conversation with him!

OK. I can’t say that I”ve seen everything Chris Pratt has been in. I thought he was great  in Moneyball. Thought he was hilarious in What’s Your Number. He was definitely my favorite part of the horrible Movie 43, but really, what I”m most excited about it is Guardians of the Galaxy and Jurassic Park 4. Two highly anticipated movies that could send Mr. Pratt into the big leagues.

When I heard he was going to be on a talk show, my first thought was as it always is. It’s so much work. The people are so weird. Parking is a bitch. Traffic will be awful (and it was), but something told me that I should go.

I got off work in Pasadena at 5:10. Jumped on the Arroyo Parkway (my most favorite parkway) and flew toward Hollywood at the happy speed of 75MPH. It was as if God had cleared all traffic between me and Mr. Pratt.  Then I hit the 101. Fucking 101. It took me over one hour to drive 4 miles. I was not happy. At this point I’m thinking “Fucking Mr. Pratt better buy me a drink or something”.

Never-the-less, I drove on. Arriving at my destination at the perfect time of 6:35. I walked around the corner of the building and was shocked to find that there was no one else there. No one. Not even a security guard. Seriously. Ghost town. I walked down the alley thinking I had missed the whole thing when two security guards came out of the building. They didn’t seem to care that I was there. Not having come here very often, I was a bit confused as to what to do next. There are usually other people: fans, looky-loo’s, and my favorite, the autograph collectors, but tonight there was no one. I basically planted myself right by the back door. No questions were asked. No one acknowledged me. Nothing.

About 4 minutes later, out walked Chris Pratt. Luckily he had someone with him otherwise there would have been no one to take our photo. I said “Hey Chris! Do you mind taking a photo with me”. He said “sure man, what’s your name?”. That turned into a bit of a dialogue which turned into a mini conversation.. about nothing. It was so random. I think we talked about the rain and maybe about traffic. The odd thing was, I wasn’t trying to have “a moment” with him. I see people do that all the time, try to have “that moment” with the star. For me, it’s just about the photo. But I gotta say- Chris was so nice. He seemed genuinely happy that someone was there for him. He was super gracious. Took a great photo and even asked how it came out.  In what was a mere 4 minutes of his day, he earned a fan for life. I’m Netflixing Parks and Rec as we speak!!! Thank you Mr. Pratt for a fantastic pic, a fun trip out, gorgeous small talk, and for making 1 hour on the 101 totally worth it!!! 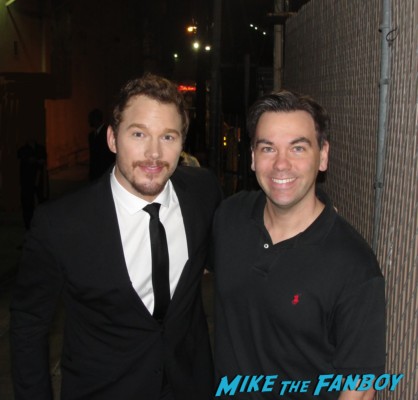