Suddenly Susan’s having a Pratt-Attack! Yep, who doesn’t love Chris Pratt? Seriously, he’s pretty damn cool. I admit, I think he’s pretty awesome. To have the summer that Chris Pratt has had and still be as nice as he is, it’s rare let me tell you.

The cool thing about Susan’s picture, is that she didn’t just get a pic with Chris Pratt, she got a pic with Andy Dwyer from Parks and Recreation.

There are good days and there are bad days being a fangirl. Then there are the days dreams are made of.

Ace and I headed out to the set of Parks & Rec after a hot tip that they were filming in our area. The tough part about a large ensemble cast is not knowing who will be there. Sure, we had the filming location, but what if Chris wasn’t even working? Turns out he wasn’t, so with heavy hearts and tears in our eyes, we headed back to my car. But wait!! We learned before taking off that they were moving to another location nearby. We hopped in the car and headed over.

This shoot was much larger and there were several possible entrances to the set. Now, I must give credit where credit it due. Ace called it – he knew right where we should stand and wait and he was right. While I was on the phone with Mike the Fanboy, a red shuttle van pulled up. I heard Ace say, Amy Poehler, Amy Poehler, Amy Poehler. I look up and see only a man in a short sleeved shirt and tie. I don’t even need to see the face to know that’s an Andy Dwyer outfit! There was Chris Pratt in all his Starlord glory.

I lit-trally (there’s a Parks & Rec reference for you) threw my phone in my bag – didn’t hang it up; didn’t say goodbye to Mike. Ace called to Chris and he waved. Then he turned back to whomever he was speaking. After a moment Ace called again, and asked him if he’d sign. Chris yelled across the street to us, “I have to go to rehearsal, but I’ll come back”. Oh my god! Was this really going to happen?! I picked up the phone and Mike told me he heard the whole thing. He bolted out the door.

About 20 minutes later, Mike arrived and we waited… in the heat… getting sun stroke. About 30 minutes after that, eagle eye Ace spotted Chris and before we even called for him, he was crossing the street to us. A security guard and PA were on either side of him. Mike and Ace know how big of a fan I am, and graciously let me speak first. 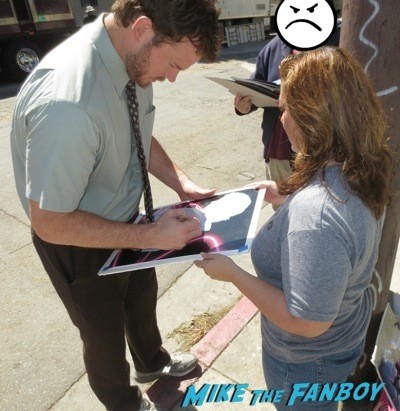 I had an awesome, fan made Starlord with his Walkman poster. Chris even said it was cool. I asked him if he would sign it to Susan and also if he wouldn’t mind adding one of my favorite lines from the movie. “whatever you want,” he said. Sweet.

When he finished he said, “I take it you’re Susan?” I said yes and he said “it’s great to meet you”. 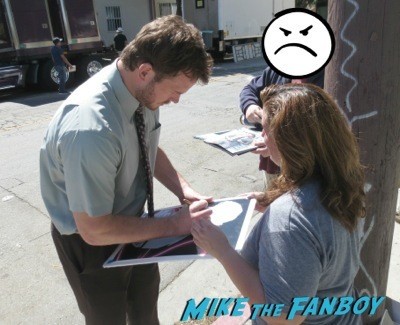 I was already red from the heat, but I could feel my face blushing and gushing, my heart pounding.

I wish I could say he was nice, but that would be a lie; he was UNBELIEVABLY kind, humble, gracious, and sincerely happy to meet his fans.

I don’t remember the exact order of what happened next, but Mike took two amazing photos for me. 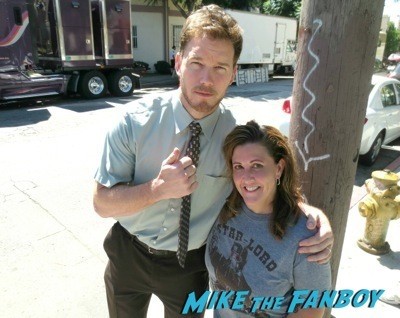 I hate my pics 99% of the time, but I have to say, these are pretty darn cute. I told Chris how I had missed him once before by 4 minutes and I wanted to cry. ‘Oh no,” he said. A-dor-able. 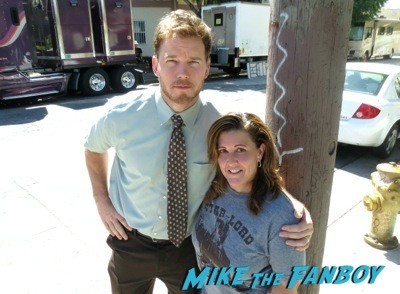 I babbled on about how much I loved Guardians and told him I was going to get a Guardians tattoo. “Are you serious? That’s so awesome!” The dude is marvelous (see what I did there). I got two more things signed quickly, as he said he needed to head back to work. 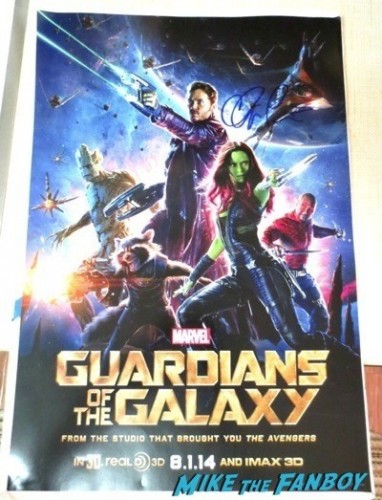 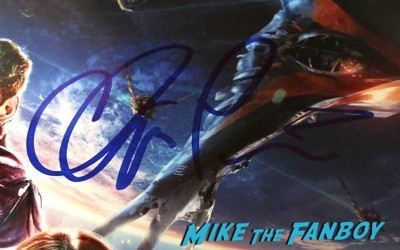 I told him that I had something for him. “For me?” I said yes and gave him a DVD of an old film noir movie and explained that Hollywood is supposed to be making a remake and he needed to get himself in the lead because he’d be perfect. He looked at it and said “I love stuff like this. That’s so nice of you.”

I’m sure I’m missing details. I was so nervous, excited, and totally flabbergasted the whole time. Finally, after FIVE fails in 12 months, it happened. I met Chris Pratt and it couldn’t have gone better; just me and two friends, no rushing, no pushing, and a few minutes of intimate one on one time with Chris Pratt. 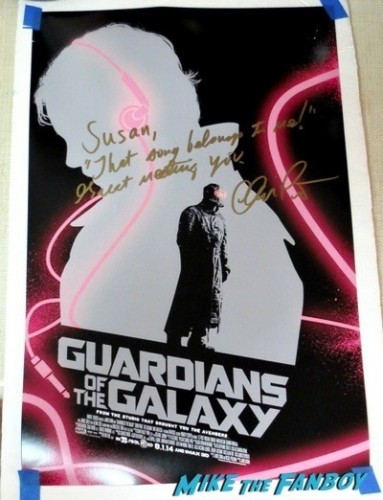 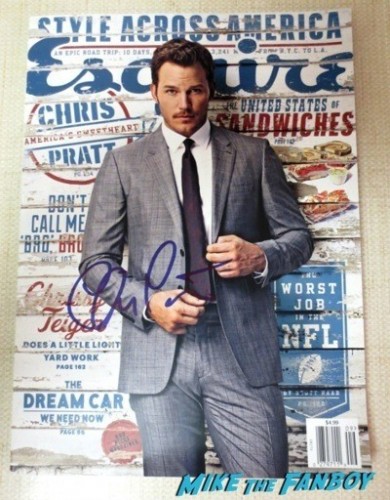 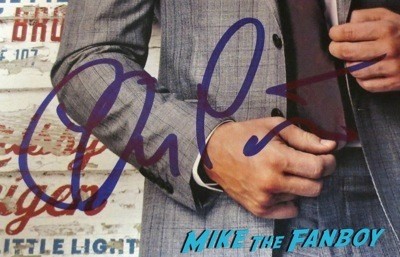