Chuck! We haven’t heard from our Man In Texas in a while but he’s back! This time Chuck has met funnyman Harland Williams after a comedy show near his home!

For those of your who don’t know, Harland Williams starred in many films including Sorority Boys, Superstar, Freddy Got Fingered, Madagascar: Escape 2 Africaand more! Plus, after reading through Chuck’s Encounter he’s a pretty cool guy!

Check out Chuck’s recap after the jump!

Hey Peeps! Been awhile since I have been out and about, but comedian/actor Harland Williams came theru town recently, so I decided to go and get his autograph.

He was appearing at a local comedy club and was doing 2 shows that night. I got to the club around 11:15pm and saw people start leaving.

I went inside the lobby and he was signing autographs, and taking pictures with people. I quickly got a 8×10 signed and took this awesome picture with him. 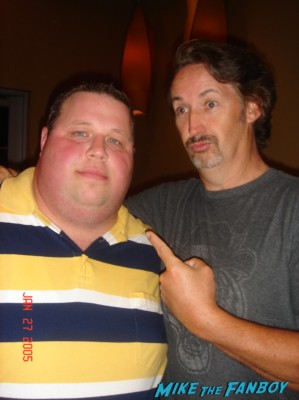 Until next time peeps.