Hey kids, I just got this report in from Chuck Our Man In Texas! We haven’t heard from Chuck in a while and I’m glad he took the time to write in! Awesome Bro!

So Chuck, like Ms. Pretty in Pinky is a Sundance Film Festival fan and met one of the hardest celebs to… Well… Get anything from, lol… Ms. Elizabeth Banks. Personally, I’m not a huge fan of Elizabeth’s but you know… I find it odd that she’s so mean to her fanbase.

Still Chuck did have a moderately pleasant encounter with her, which is honestly one of the very few that I have heard of.

I know it has been awhile since you guys have heard from me, but I wanted to post my success I had with Elizabeth Banks. I understand she has a bad reputation among collectors, and I knew this when I tried to meet her at Sundance in Park City, Utah in 2011. However, I had to try because I needed to get her on my Zack and Miri dvd cover.

So I was out and about in Park City, when I got a call telling me she was doing an interview and the location. I high tailed it over there and sure enough, after waiting about 20 minutes, she came out with another woman. She started walking down the sidewalk, and I asked her very nicely to sign. She tried to ignore me, but finally stopped for a brief minute, long enough to sign my dvd cover, and a card for a friend who was there too.

She started walking down the sidewalk again, and I followed her for a bit and put my stuff away. I got beside her again, and asked her for a photo op. She ignored me and kept walking. I kept the pace with her, and as she was crossing the street I asked her again. She told me I could take a picture of her walking, in a smart @$$ way. So I told her…You can stop walking and let me do this! I think she was actually shocked some one had the audacity to call her out on her rude behavior. She stopped and looked and me and smiled, and I leaned in for a really nice self blast. I thanked her, and she said your welcome and continued on her way.

I heard later she only signed for 4 more people the rest of the time she was there, and as far as I know, I am the only one who got a signature and a picture. 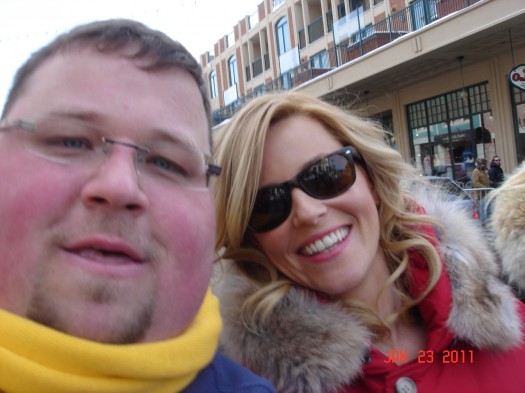