Home / JM • Reviews / Church & State Movie Review! JM Says, “It illustrates the craziness of both sides with the fight against the definition of marriage!”

Separation of religion and politics has been a perpetual problem for the United States since the Founding Fathers. When it comes to same sex marriage, “Church & State” illustrates the craziness of both sides with the fight against the definition of marriage.

Back in 2004, Utah passed Amendment 3 by 66% with constituents arguing marriage is only between a man and a woman. Ten years later, LGBT activist Mark Lawrence sought to fight traditional law and make same sex marriage legal in the state of Utah. Going up against The National Organization for Marriage and the heavily influential Mormon Church, Lawrence attempted to bring the fight to the state capital despite Utah acting more of a theocracy instead of a democracy.

What initially started as a Facebook discussion soon blossomed into coffeeshop meetups before laying the groundwork for the landmark Kitchen v. Herbert case. Despite the initial group possessing no PR, legislative and fundraising expertise, the advocates attempted to reach out and influence community leaders, who refused to fight with them. Despite the obvious uphill battle, why would anyone attempt to take on the Mormon church and redefine the concept of marriage?

“Church & State” certainly captures your attention and maintains your interest throughout. The film focuses on the Church of Latter Day Saints (LDS), it’s political influence & impact and homosexuality in Utah. The constant conflicts of Mormon teachings and outsiders has historically been one of the most interesting, yet underdiscussed topics. For Mormons, church is the center of life and was founded outside the reach of government after losing a battle with the United States when it sought religious freedom for its practices, including polygamy. Much like Scientology, anytime someone criticizes the church or depicts less popular ideas with Mormonism are automatically ostracized, and excommunicated, if they haven’t already been. 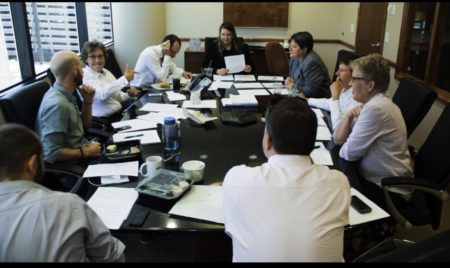 The fight for marriage equality has been a slow, steady fight for decades as support for LGBT rights have swelled in the past two decades as mainstream accessible and socially acceptable. During the 1950s, ideas of homosexuals being menaces and possessing a psychological condition gained popularity. Although the “Lavender Scare” highlighted the moral panic of the day, the film briskly brushes over the topic and doesn’t develop that background further. Then again it’s opening Pandora’s Box.

The film focuses on the teachings and ideas of homosexuals being a menace in society with the LDS Church and Utah. Throughout there are plenty of LDS broadcasts discussing the morality of cohabitation, the “correct” family structure, and an overall Anti-Gay politic. When same sex marriage policy gained traction in the 90s, the LDS church came out with “The Family: A Proclamation to the World” and it became a central component to Mormon identity. Although it doesn’t mention gays directly, the cultural impact can’t be overestimated. 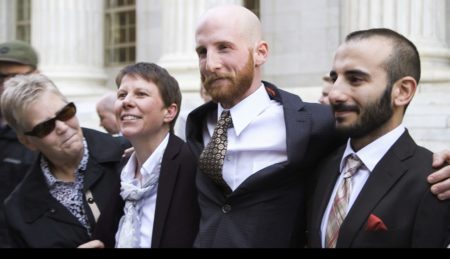 Unfortunately, most arguments against same sex marriage utilize the “children” argument to justify their actions and objections. One can’t help, but think of Helen Lovejoy’s now infamous, iconic line from “The Simpsons” saying, “Oh, won’t somebody please think of the children!” Sadly, it’s inspired the term Lovejoy’s Law, which acknowledges the rhetorical tactic of “thinking about the children” as a diversion to justify a probable weak stance appealing to emotion instead of facts and thus creating a logical fallacy. Sadly, the film again doesn’t even address and acknowledge this terrible tactic. 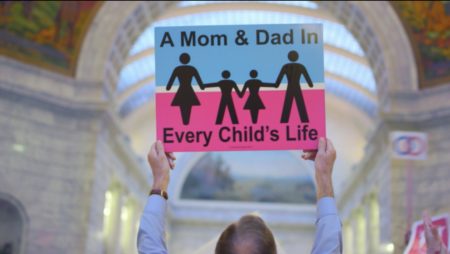 Directors Holly Tuckett and Kendall Wilcox weave together an interesting insight with the landmark case Kitchen v. Herbert, but it feels like they barely scratch the surface. The documentary leaves you wanting more. Derek Kitchen was the lead plaintiff (with his partner Moudi Sbeity being another) in the landmark case Kitchen v Hebert , who sued for marriage equality and Kitchen eventually became a city councilman. However, this interesting tidbit is not mentioned at all nor is the fact Gov. Gary Herbert is still the governor, who is barely mentioned throughout the documentary. Over the course of the film, Mark Lawrence becomes almost a forgotten hero with his differing opinions and seems to disappear almost like a pariah with no explanation. “Church & State” showcases an interesting subject matter, yet might have been better suited as a miniseries with more in-depth discussions. What’s unfortunate is the film focuses on justice overcoming prejudice, but doesn’t dig deeper with all of the communities portrayed. It’s understandable no one from the LDS Church spoke to the crew, but to interview no ex-communicated members (“Religulous” interviewed several) and/or former gay members of the Mormon church seems stunning. Overall, it’s an interesting look into a landmark case, but lacks the memorable moments we’ve become accustomed to with modern-day documentaries.