Home / Fanboy Family • Interviews • Q and A • The Novel Strumpet / Talking With Fargo’s Colin Hanks! Mysteries! The Freezing Cold! Heroes! And More From The FX Hit!

Have you guys been watching Fargo?  You really should.  It’s just awesome, and everyone is so good!

Recently I got the chance to participate in a Q & A with Colin Hanks who plays “Gus Grimly” on the show.  I can’t tell if that name sounds like someone who hosts those late night monster hours on TV, or a really cool writer.  One of the interviewers joked that it sounded like a Scooby-Doo villain. Colin said that it sounds like he should have a band “Gus Grimly and the Grimtones”…I like it!

If you’ve missed any of the show, I warn you now about slight spoilers ahead….

We first met Gus in the pilot episode when he pulls Billy Bob Thornton’s character Malvo over, and for certain reasons, lets him go when he knows the guy’s not “right”.  Now Gus is trying to make up for that mistake.

One of the questions to Colin was how he felt about only being in that one scene for the pilot:  “…I remember some people are like God, that must be a bummer, you’re only in one scene in the pilot, and I’m like look, if you’re only going to be in one scene in the pilot, that’s the scene you want to be in because there’s so much going on within that moment, between those two characters,…and I think that that scene, everything is at work there. You see “Malvo” and the way that he plays people and the way he manipulates people with fear, with intimidation. You see “Gus” completely out of his element, not sure what to do, and his indecision is in a way his decision, but that eats at him and it will eat with him for the rest of his life. That is a decision that he will have to live with forever, and so, man, that kind of complexity within a scene, within characters, as an actor, you salivate for that stuff.” 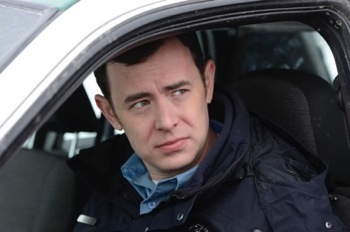 That’s what’s so great about this show.  It really feels like the story is telling itself and not trying to appease actor egos or making sure certain people get the correct screen time.  It’s so refreshing.

In regards to “Gus’” decision in letting “Malvo” go, there were a lot of questions about the characters motivation and if that was right or wrong and the impetus for “Gus”.  Which we discover is the character’s daughter.  Colin’s a father of two, so he said that he knew a thing or two about how that would motivate the character:

“Once you have kids, it sort of makes you reevaluate things, and all of a sudden, you’re important but only to a certain degree, and so, really in that scene, he decides to make this decision to let “Malvo” go because he needs to be there for his daughter because her mother is not there. “Gus” is all “Greta” has, and so, that right there, that tells you a lot about “Gus” and tells you a lot about the way that he sort of looks at things…

When it came to playing “Gus”, Colin said he didn’t do a lot of preparation for the role: “Really the only preparation that I did was just working on the Minnesota accent. That was really it. “Gus” is not necessarily—well, he is not a good cop really. He is sort of out of his depth, out of his element so there wasn’t really any police training that I had to do…In fact, I sort of specifically did things poorly. You train, if you play enough cops, eventually you say I know how to hold the weapon, I know how to do this, and I sort of undid all of that to make “Gus” look a little bit more out of his element…” 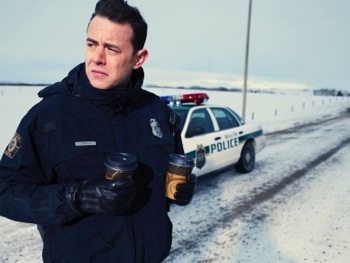 He also shared some interesting insights on his relationship with his character: “…You try not to judge your characters too much, but there were definitely some moments where I was frustrated. I was frustrated at “Gus’” inability to do things—do certain things, I guess I should say, but “Gus” is as well, and so, that was really something that I sort of leaned on and drew from. …The thing I enjoyed most about “Gus” was the fact that there was an awareness to him. Oftentimes you see these characters and they know that they’re not good, but they’re just instantly beat down, but this is something that slowly eats at “Gus”. …I like the fact that here was a character that made this mistake and spends his time, even though he doesn’t necessarily want to, atoning for it and trying to fix it, and he fesses up, to a degree, as to what he did and he actively tries to right the wrong. That really appealed to me…”

Another interesting insight to the character was the question of whether one could argue that “Gus” is a hero, not your typical hero, but sort of the everyman type.  Here are Colin’s thought on that:  “…Obviously, with “Gus”, you definitely don’t think oh, well here’s a hero. He doesn’t necessarily hold himself in a heroic stance. He doesn’t necessarily speak in heroic tones or anything like that, but again, in approaching this in as realistic a manner as we can, and that was a goal for all of us with the show, oftentimes, your real heroes are not necessarily six-pack abs and huge biceps that come and save the day.  They’re people that maybe don’t want to be heroes. The thing that they’re doing, they don’t want to be doing, but they have to do it because they’re compelled to do it…”

“Gus’” daughter “Greta” is played by Joey King and Colin had great things to say about her:  “Joey King is a force to be reckoned with. Within the first day of filming, I turned to Noah and some of the other producers and said wow, okay, she’s really good, and she’s still young, but she’s been doing this for a long time so in a lot of ways she’s probably more professional than I am.”

He also spoke about how much he loved working with all the other actors on the show and had this to say about Allison Tolman who plays “Molly”:  “I was so impressed by her skill to be quite honest. She was so comfortable and relaxed and also so good in the role…”

Speaking of “Molly”, she and “Gus” are now forming a sort of alliance to get to the bottom of some of the mysteries swirling around the show.  Some of the interviewers tried to get a little bit of an inside scoop about what was coming, but Colin was good at playing it close to the vest so he didn’t give anything away.  Dang it.  And good for him.  Dang it.  ;P

Talk also turned to the weather, and how big a role it plays on the show.  Evidently it would get so cold the camera crews would have to wrap electrical blankets around the cameras.  That’s just crazy!  Colin said that the trick to performing in that kind of cold is to become really good friends with wardrobe so they’ll give you hand and body warmers.  Good to know!

It was mentioned that Colin does seem to play these sort of “clean cut” roles a lot, so he said that if there are any scruffy, bearded characters out there…he’s willing and will send his headshot.  LOL!  It sounds like he really likes to take on roles that he feels can give him different experiences as an actor.  Comedy, drama, it doesn’t matter so long as he feels challenged by the role, and that he really likes collaboration with other people on projects.  He also talked a bit about how it may seem like a glamorous life, but really actors are always looking for the next role, no matter what level you are in your career.

The question came up about the difference between film and television.  Colin, like so many actors recently, seems the ‘differences’ shrinking:  “Well, I think in this day and age now an acting job is an acting job. I don’t really see any difference between whether it’s a film or a movie in so much as a job is a job.  The way that I find that they’re very different now is that the quality of television is so great, and now, you have television series that are not necessarily entrenched in the old television rules. For example, our show is very different. It’s a ten-episode series. There’s a beginning, a middle and an end, and so, in that way, it’s almost like a ten-hour film. It takes its time to tell its story, but yet, it also doesn’t follow by the rules of you have to introduce the eight main characters in the first ten minutes….You really get to take your time as if it was a film, but you get to take nine more hours as opposed to just one. That’s kind of refreshing, but for me, it’s all about the writing and the characters. I don’t care if it’s a movie or a television series, whatever is best.”

Given his pedigree, you would expect Colin to be good at comedy, but does that mean he’s a natural or does he have to work at it?  According to Colin:  “Well, I like to think that it’s a combination of both. I’ve always been a big fan of comedy and sketch comedy and I like to laugh… but you can’t just be funny. You do kind of have to work at it, and you have to try and know what your role is and when you can insert humor or when it’s best not to, but oftentimes I find, especially in regards to Fargo, there was a balance to it. Obviously, it’s not a straightforward slapstick comedy. There are realistic moments, but yet, there’s also levity and humor. As much as snow is a character in Fargo, humor is as well. So, you just try to play the funny moments as real as you can and hope that people get the joke, but it’s not necessarily dealing with punch lines or anything like that.”

Well, me personally, I think they’re nailing it.  The show is just amazing and I can’t urge you enough to watch it when it airs on Tuesday nights on FX at 10pm ET/PT.

As a little side note, Colin is a big person on Twitter and he’ll be live Tweeting an upcoming episode so be sure to keep your eyes peeled for that.

And once again:  Fargo, Tuesday nights, 10pm ET/PT on FX!