People are starting to get cornered and more desperate with only one more episode left in this season. A riot breaks between the Red-Hats and one of the communities when they disrupt a memorial service for lost loved ones. Apparently it was only one of many incidents broke out that night. People are left hopeless with the execution of Geronimo; there’s nothing more dangerous than a man who has nothing to lose. Will and Beau use the crisis to get one of their own plans of escape in motion. They approach Snyder to gain permission to go beyond the wall. Under intense pressure to secure his own position in the authority, Snyder takes the bait; Will and Beau convince him that there are active rebel forces beyond the wall plotting to take down the Occupation. They are granted access to advance into downtown Los Angles. 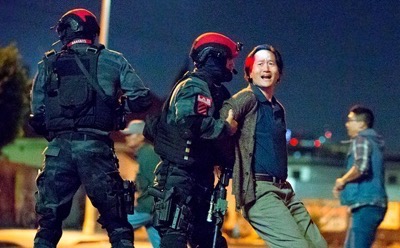 Katie meets up with Broussard for the first time since the tragic loss. Broussard confronts Katie on her blinding emotions. He wants her head uncluttered; however, she believes those exact motions to be the driving force behind her fight. Broussard takes Katie to meet the new crew; the crew who seek out his help to kidnap the higher official visiting the LA block. The team is apprehensive about Katie being part of the operation since they obviously assumed Broussard partner to have a military background. Nevertheless, Broussard vouches for her and place his own life in her hands.

Accompanied by Captain Lagarza and his men, Will and Beau crosses through the massive wall to downtown Los Angeles. Once they arrive at the targeted hiding place of the rebel group, the team breaks out to cover all grounds. Will and Bea form their own search party to separate themselves from the group. They finally get their first glimpse of the reality outside the wall since the arrival. The bird’s eye view is certainly not a cure for sore eyes. Now they know what happened to all the cars. The true purpose behind this mission was to gather Intel for safe passage once outside the walls. Now that they’ve seen what they came for, Will plants evidence and with Beau’s help, puts on quite a gun show. 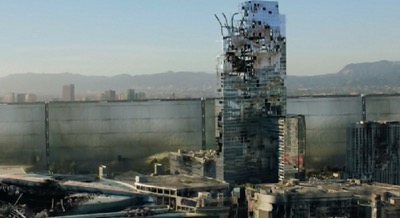 Captain Lagarza takes the evidence back to Snyder putting more fuel to the fire under his feet. Now Snyder not only has to worry about what’s happening within his walls, but also has to beware of threats beyond the walls. His men come across the tunnel Bram and Pia has been using the past month. Will and Beau just found their way through the wall. In means of capturing the insurgents, Will insists on keeping the tunnel open.

Meanwhile, Broussard and his team are gathering Intel on the subway systems since they suspect the VIP guest to arrive through the LA Metro rails. The detail specific Intel makes Katie question the team until they revealed their super spy; a bee, an insanely modified bee. I like the new-wave rebels with the awesomely wicked toys. They plan on derailing the train to throw everyone off their guard enough to snatch the VIP off the cabin. 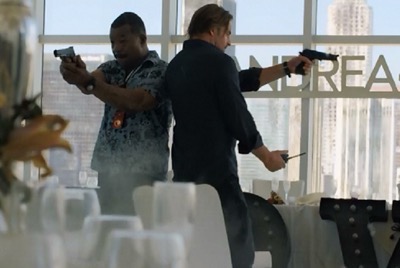 It seems like the entire Bowman family is on edge tonight. Katie gets ready to head out on her mission, but from the looks of it, Bram is preparing himself for his own venture. Even though he resists at first, Katie wins his trust and convinces him to stay behind with Grace instead. She approaches Grace before leaving, but ends up uncovering unsanctioned lessons taught by Lindsay; yup, Grace has been getting brainwashed to obey and appreciate the host. Just when Katie thought her night couldn’t get any worse, Will walks in with a huge surprise.

Will surprises Katie with his “exit” plan; the family goes with Beau to his cabin in Big Bear while Will goes in search for Charlie. He did not receive the happy response he was hoping to get from Katie; instead, she brushes off his plan to be silly and rash. Will and Katie explode, letting everything that has been building up between each other escape. The fight we’ve all been waiting for this whole season finally surfaces. Hallelujah! Rather than running away from the problem, Katie wants to stay back and fight the Occupation. At the end, Beau leaves for Big Bear alone. 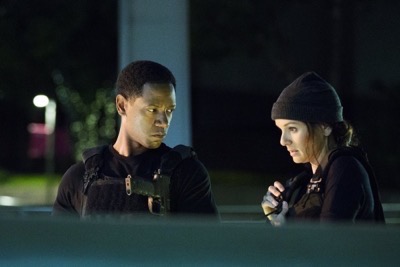 Katie wins the battle by being the only Bowman who manages to carry on their mission that night. She and Broussard take down the Red-Hats at the metro station to let the rest of the crew in through a passage in the subway tunnels. The team quickly assembles the bomb on the train tracks. Instead of simply derailing, the bomb ends up being strong enough to turn the train into crushed tin metal. They approach the mangled train cars and among countless military bodies, they find their VIP guest. At least they assume him to be the VIP guest; the special mask and body armor definitely makes him stand out from the rest. 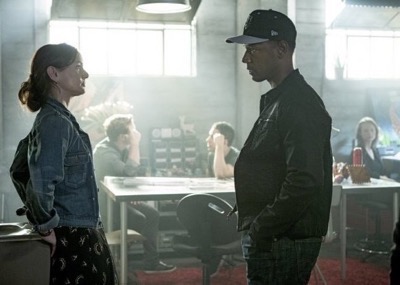 Will the Bowmans ever reunite as a family, or will they keep fighting on opposite ends? One more episode left guys. Hope you are all ready for the final showdown!